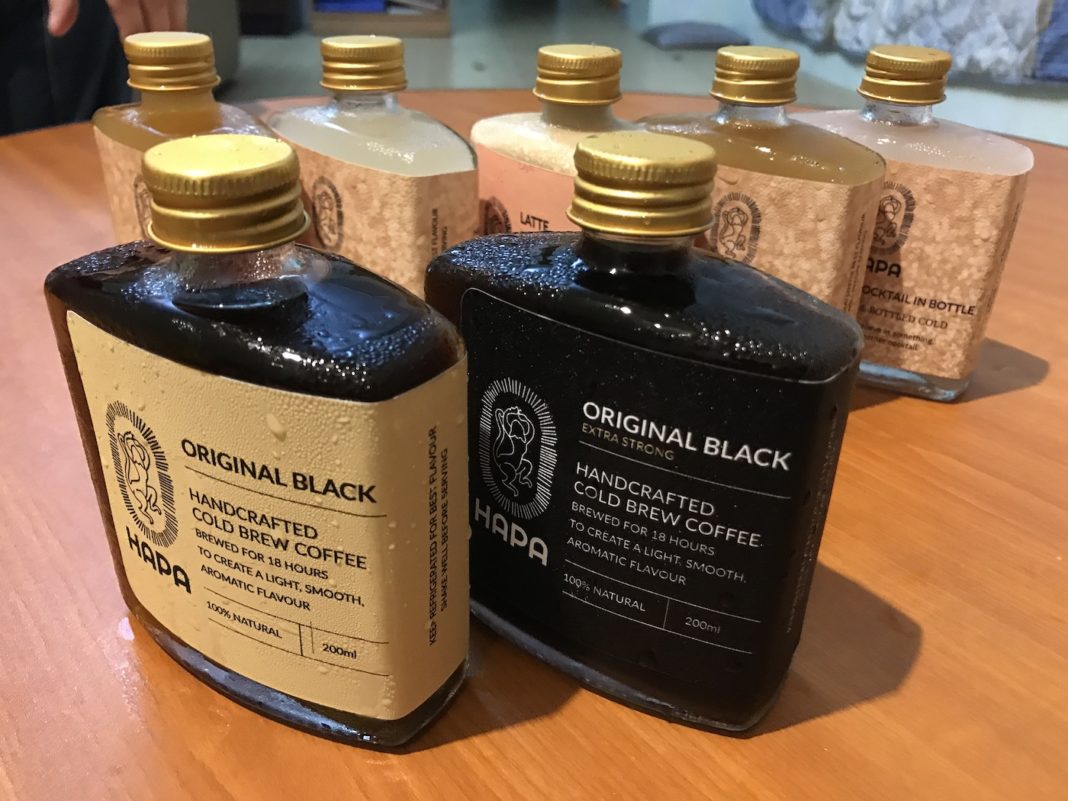 I’ll be honest. I was very skeptical when I first heard about HAPA. It is an understatement to say that the bold strategy of letting the customers “pay as they feel” for their drinks is a risky move in this day and market. My uncertainty wasn’t quelled by their delivery service either, because,  for my too-stubborn taste perhaps, coffee is supposed to be drunk hot, and cocktails cold. But my curiosity overcame my doubt, as I decided to give them a try. After all, coffee and cocktails delivered to my doorstep never sounded better than when I’m stuck at home during a global pandemic.

The first thing that impressed me was the method of delivery. The bottles came in an icebox, so when they arrived, they were still perfectly chilled. One by one, they took place on my table, lining up and eagerly waiting to be tested.

I started with the coffee.

To my surprise, cold brew coffee isn’t just cold and regular. As it is prepared in an entirely different method using just cold water, the taste and texture were slightly odd for someone new to it. It was raw, for lack of a better word. It was a curious experience and it’s worth trying.

Wrapped in a black label, it looked and smelled stronger than its predecessor. The intensity made for a much more familiar taste, which made it more enjoyable. Newcomers to the scene of cold brew might find it more suitable to their taste buds.

The last coffee bottle – the Latte – looked pale in comparison. It was too light and milky for my preference. Without any noticeable flavour, it had neither the sweetness of any kind nor the kick of the coffee, and left nothing but an indifferent shrug.

And there they were! The lemongrass infused gin welcomed me with a wondrous smell with its ginger, Thai basil, lime and sugar combination. It was very pleasant, smooth and reminded me of a fun summer night-out with good friends. I had a few more slow sips with a satisfying sigh before opening the next bottle.

Army Rum, a notoriously strong local drink, with its popular companion, salted fruit, has a deep spot in Burmese drinking culture. Before the arrival of western liquor brands, this was all one could get, but to this day, a loyal fan base remains, and this cocktail showed me why. The salty aroma of the fruits and the fiery burn of the rum go well, maybe too well, together.

A twist on the traditional Whisky Sour with its inclusion of tamarind and honey was my third cocktail of the day. The sweet smelling honey did most of the job, as the faint aroma of the tamarind sat in the background. A good idea, and one for those who like their drinks sweet.

The last cocktail in my hands, the Hazy Daze, is a combination of vodka, fresh strawberries, Chardonnay white wine and lime with a few dry rose petals mixed in. With my eyes closed, I went to the beach with my first sip, heard the waves with my second, and by my third, I could smell the ocean.

Overall, having tested all seven bottles I found myself liking the idea and most of its execution. I wasn’t the biggest fan of the coffee, but it just might be that I wasn’t used to the cold brew method. The cocktails were surprisingly good though, with a few extra points going towards the packaging. Drinking out of the bottles made it certainly more fun!

I noticed a small note on the back of the bottles, when I was wondering what to do with them once they were empty. “Return this bottle. Get 500 Kyats”, it says. A good idea to get people to recycle, and buy more, which might be exactly what I’ll be doing once I’m done with this batch!

Message them on Facebook @hapamyanmar if you want to order some booze during the lockdown.

The Blessing : The Finest Garlic Oil Noodle in town