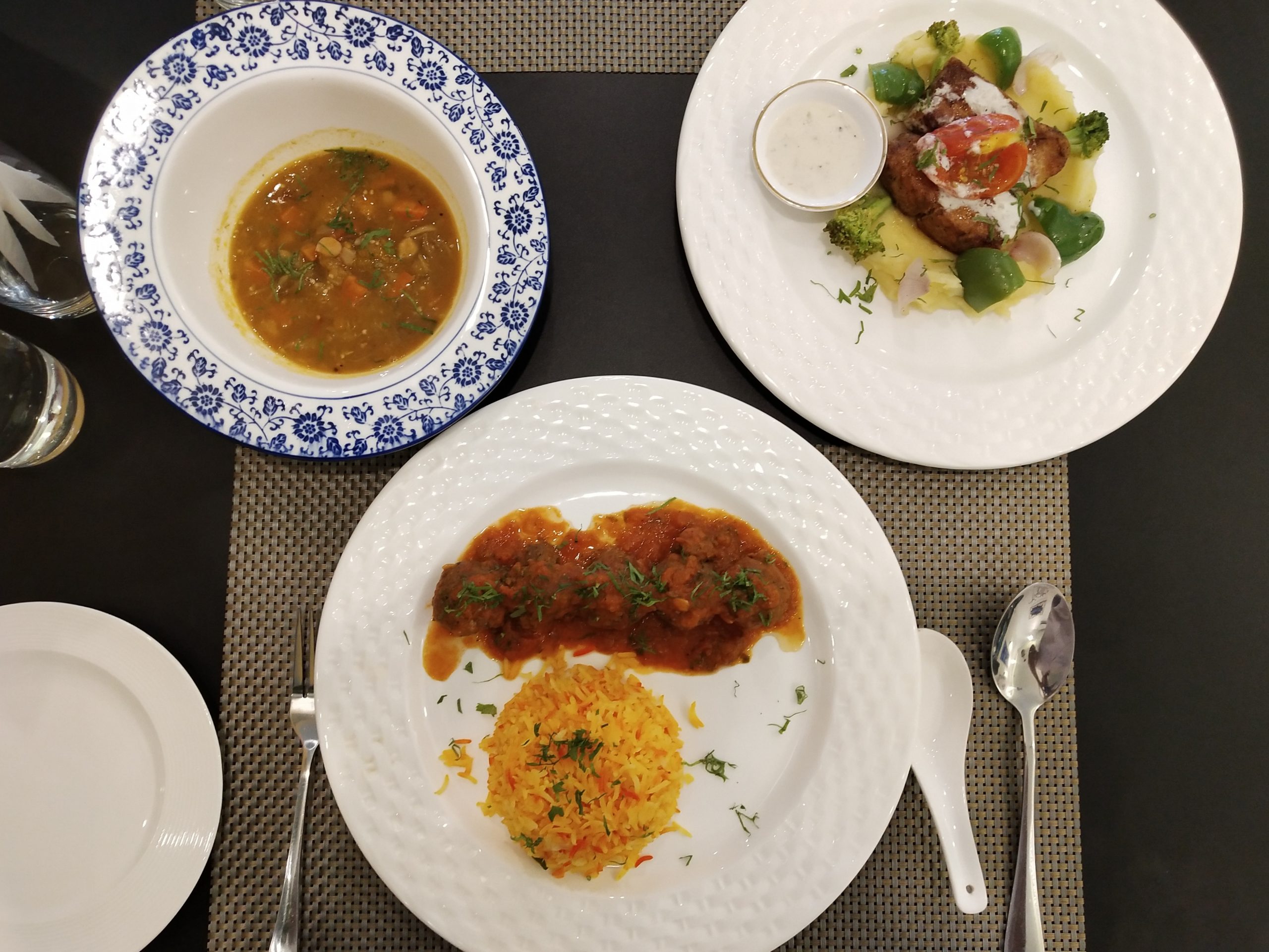 I’ve known Prime Grill since its days in Nawaday Street. When it was relocated to the new place, I’ve been meaning to visit. I finally got there yesterday.

The current establishment has three floors including the rooftop. Gone was the unassuming decoration. Now the rooms are more spacious and ornamented. The pastel blue theme colour gives it a chic and instagrammable look. 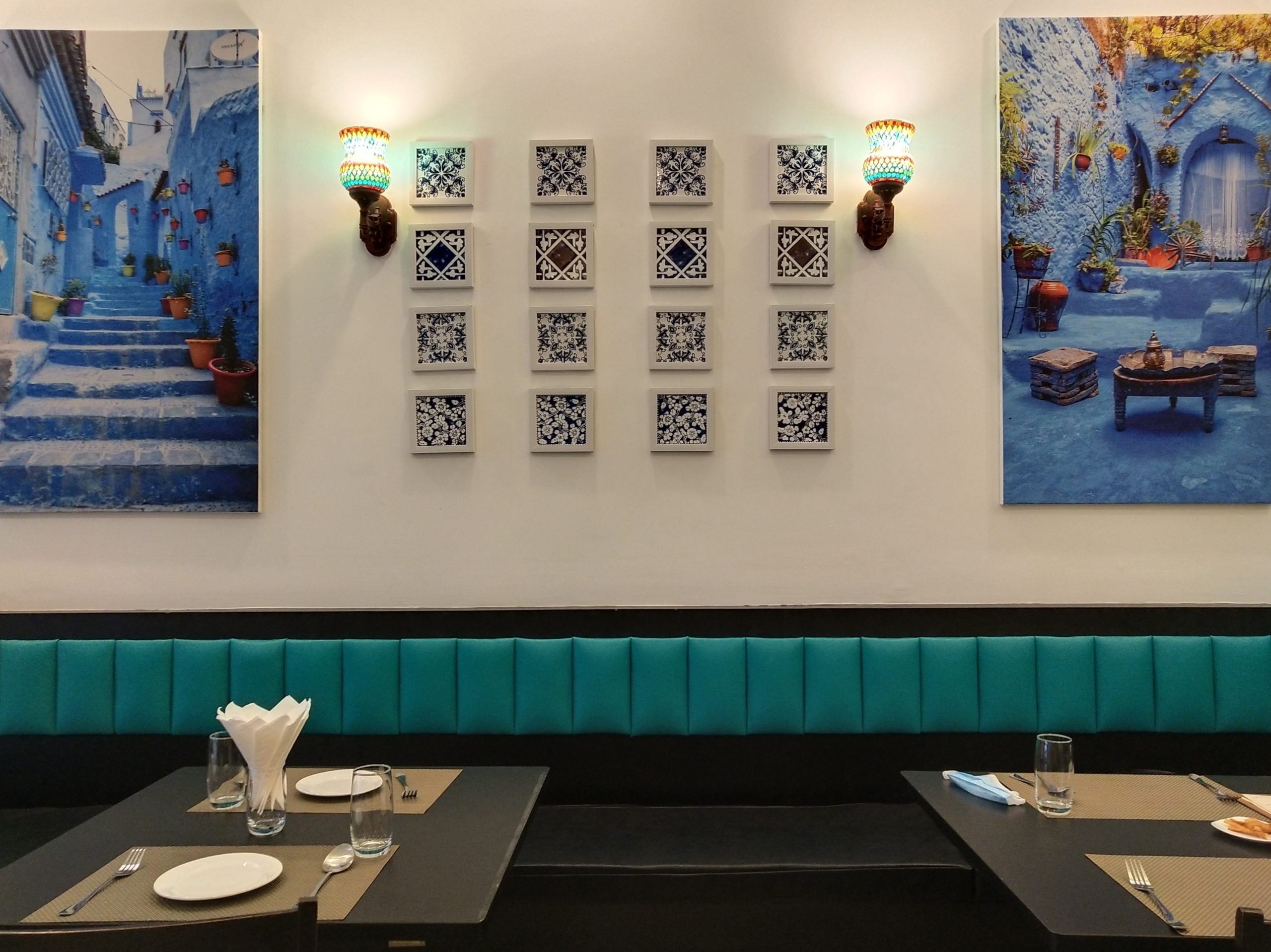 It was late in the afternoon and I was famished, so I went straight to the main course section. I ordered Iraqi Kofta Curry with yellow rice (Ks7,000), Baked Fish in Lemon with mashed potato (Ks7,500) and Garden Vegetable Soup (K3,800) which was still not in the menu but already popular among customers.

The Mediterranean cuisine is rare in Yangon, especially in this price range. But it charged Ks1,000 for a large bottle of Designer Water so better bring your own water bottle if you get thirsty.

The soup came first a few minutes after the order and was followed by the Kofta curry. The spicy aroma of the soup and the curry was appetising. The baked fish came the last which was almost a 15-minute wait.

The ground beef of the curry was well spiced and cooked. I couldn’t help but draw parallels between this and Burmese curries I was used to. Generally, the spices used here were milder and more appealing to people who don’t favour strong smells. The meat might be marinated in yoghurt since I felt like I could taste it. Feel free to point me out if I’m wrong.

The soup was a mix of lentils, carrot, aubergine and some other veggies I couldn’t make of. It was tasty, nourishing and went well with the yellow rice and beef curry.

The baked butterfish was good enough although I had a fishy smell when munching on the fat region. It happens when you have fatty fish and the accompanying sauce helped cover the smell to some extent. I didn’t mind but beware if you do.

After the meal, the first real disappointment came as I leant desserts were unavailable. The staff said they didn’t make any cakes since the fridge didn’t work due to blackouts. I understand Yangon had frequent power cuts these days. But this shouldn’t be an excuse but a challenge to overcome. I look forward to improvements.

I just ordered mint lemonade instead. Although it had “Mediterranean Style” in its moniker, I didn’t notice any difference from the mint lemonades I’d had elsewhere. Anyway, it washed off the aftertaste of the meals and freshened me up.

I checked out the other floors once I finished my drink. The second floor had a private room and the staff told me they didn’t charge extra fees for it. The rooftop was pretty airy and best for the dinner.

To wrap it up: the curry and the soup were delightful. The fish was average. The lemonade did its job. The prices were fair and the portions generous. The staff were attentive and curious about the customers’ opinions. I just hope they find a solution for their dessert situation. After all, a perfect meal is not complete without sweet delicacies.

The Blessing : The Finest Garlic Oil Noodle in town