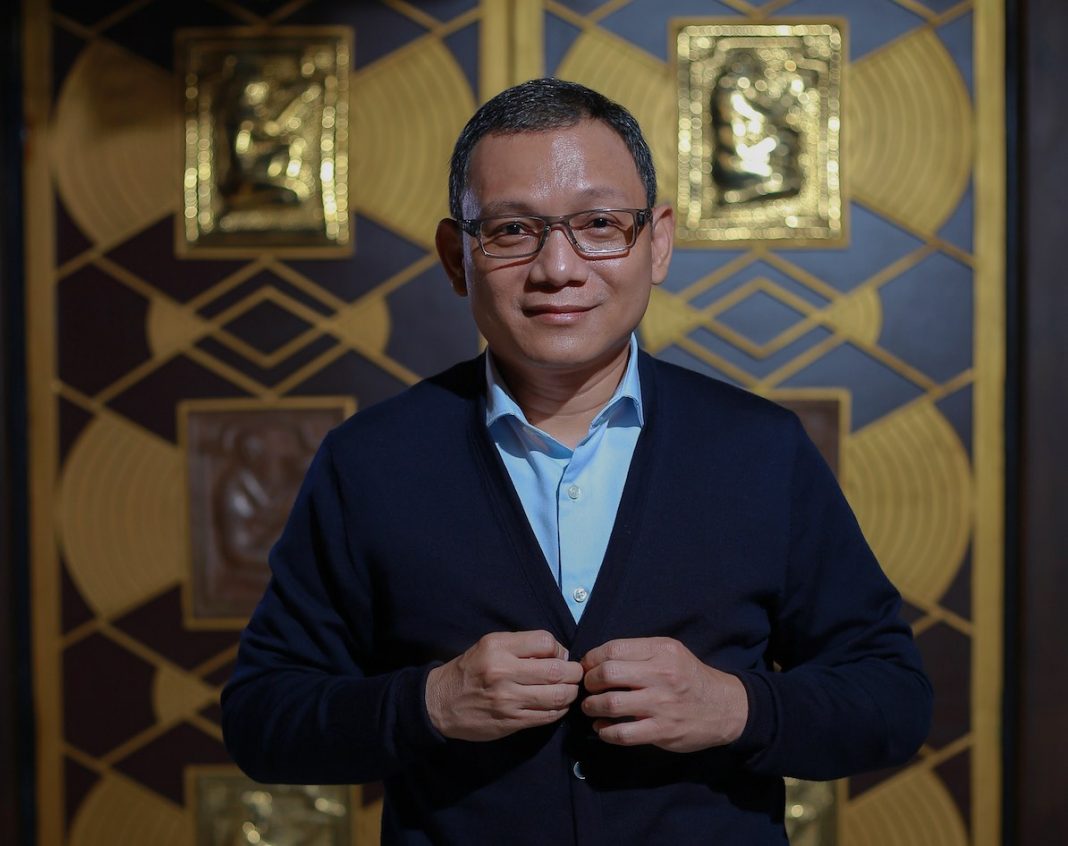 His office is filled with glittery objects, a hot pink mushroom lamp beams light towards three blue lampshade domes on the other side of the room. Golden Buddha’s look down on his desk, as nick-nacks fill the remaining space, a Statue of Liberty, and toy trucks surround a chessboard. No. Two chessboards along with the ‘Little Book Of Chess’. This is the office of U Zeya Thura Mon, Myanmar’s ‘Mr Sparks’, the largest private provider of electricity to the nation of Myanmar.

Starting his company at age 30, when he returned from overseas, Zeya & Associates has grown from a small electrical equipment provider to negotiating deals with Rolls Royce and became a company that can elevate Myanmar’s electricity sector.

Plug in your kettle and the chances are that Zeya & Associates are providing the power. “Currently with me, my partner and investors, we are generating 30% of electricity in this country. We’re the biggest provider other than the government.”

In his office, Zeya Thura Mon clearly doesn’t feel comfortable with attention. Camera’s focussing on him, microphones being pushed underneath his jumper as he waits, nodding with detachment, behind a crisp blue facemask closely wrapped around his nose.

Yet get onto his favourite topics, his ‘special pass’ for riding on the Yangon Bus Service and the world’s biggest ‘crony’, ‘Benjamin Franklin’, and Mr Sparks lights up the room with pure charm.

Cronies? “I want to be a crony. The biggest crony is on a dollar bill,” he argues, pulling out his phone to quickly find a picture of Benjamin Franklin. “A crony can be a good thing, or a bad thing.”

Really? “Yes. The rule of being a crony is being a very big businessman. We are in the list of powerful companies but only between 100-200.”

A crony Zeya Thura Mon may not yet be but ambitious, and a visionary, there is no doubt. He wants to change Myanmar from the bottom up, transforming this nation into an Asian powerhouse.

Without the political influence, he’s already edging the country forward. In 2015 he became one of the founders of Yangon Bus Public Company Limited (YBPC) and successfully launched the Bus Rapid Transit (BRT) Lite.

Five years ago, he saw a need. The local buses were in a shocking condition, making it a challenge for people to get to work. He fixed it. “It was an interesting project but not money-making.”

While his company also dabbles in banking, and medical equipment and vehicles trading, but, it’s creating electrical generation where Zeya Thura Mon has truly made his strategic moves.

The key to power is not coal, but tapping into Myanmar’s extensive natural gas, hydro and wind power. “Coal fire is complicated, given the environmental concerns and investors won’t touch it.”

Whatever innovative solutions are needed Zeya Thura Mon is committed to delivering them to this increasingly energy-hungry nation.

Only 16% of rural villages and 36% of the whole country were connected to the grid in 2014 – 2015. With the backing of the World Bank, Zeya & Co has been a significant player in hauling the infrastructure over the rocky mountainous roads in the Shan State and through deep muddy deltas to enable villages to have light.

This is life changing. Children can do homework after dark. Parents can set up cottage industries, enabling wealth generation to impoverished villages.

“When we connect a village, they’ll switch on the lights for 2-3 days to celebrate even during the day.”

There is a feeling that the government has fallen short of expectations. The National League for Democracy’s scorecard? “Taking the power (democratization) after the elections – good. The country’s economy; not good enough.”

For Zeya Thura Mon wealth creation will only come when the nation’s business risks are reduced. Particularly improving transparency, efficiency, and accountability within government.

If it takes throwing himself into the political corridors to convince parliament of the need to amend or rewrite laws, fine, whatever it takes to cut red-tape and bureaucracy, he will be there to rock the boat.

Change begins at home. Zeya & Associates practice what they preach. Through their Double Tree Co-operative, his 400 employees are part of an education and investment fund.

Every worker can borrow from the fund to buy a house and have their, and their families, education costs covered. For children “we pay from primary to the end of university” – 14 years!

This man of many ethics has been influenced by a strong family unit. Growing up in Yangon he watched his mother’s dedication to her work.

After school he’d meet her at the hospital where she was employed as a gynaecologist. “Unlike others, I don’t feel strange going into a hospital, I feel comfortable.” Those were on the good days but every so often his mother would fall silent, there was no smiling. These were the days when a mother or child had died.

Medicine is well entrenched into the family, with both his parents, his grandfather and soon his eldest daughter, involved in the industry.

At University he graduated with a History major after becoming fascinated by the rise and fall of national power, China, Rome and of course the Kings of Myanmar were lessons in successes, and failures.

To back a career, he completed a double major in engineering, something he’d been interested in since childhood. “I’d take a watch to pieces and put it back together but usually it was damaged.”

In business there have been small failures, the building of a power plant before the government had finalized the contract to buy the energy. These were valuable life lessons.

After years of moving from strength to strength not even the cutthroat nature of the industry dampens the dream. “Competition is very tough, people want to kill you,” but the company survives and flourishes, as does his vision for Myanmar.

So fiercely proud of his nation on his first visit to Europe he couldn’t believe the response from an immigration officer. “He looked at my passport and said, ‘I’m good at geography but I don’t know your country,” he says shaking his head indignantly.

That’s the reminder of what’s in store for Myanmar with the rise and rise of Zeya Thura Mon. Working from behind the scenes this nation will be a powerhouse not to be forgotten. This article was published as the cover feature for MYANMORE Magazine issue #45 for January.

[Yangon] 10 co-working/office spaces for every budget