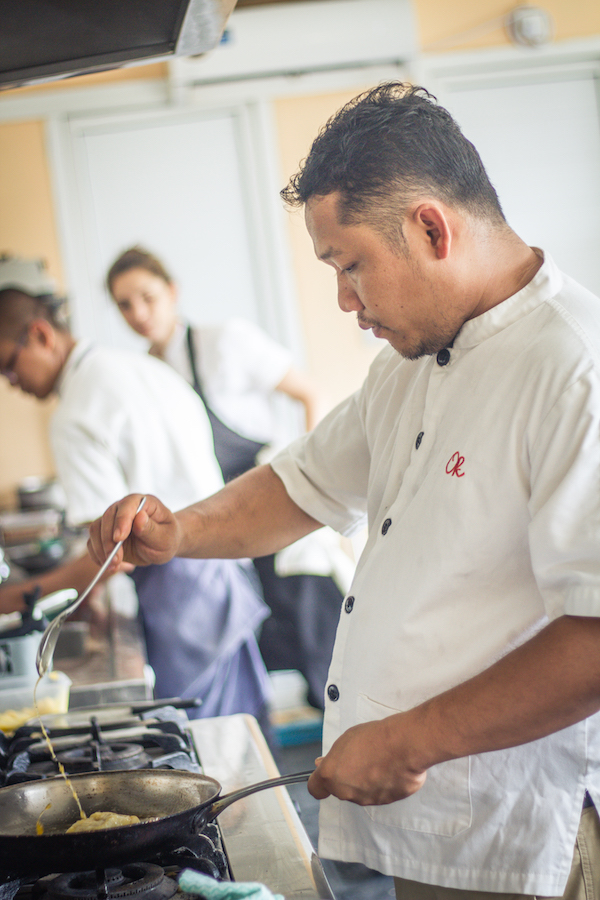 MYANMORE Chef of the Year 2018 award winner Chef Orng writes about a new recruit to the team and introducing one of his favorite dishes to customers.

At the beginning of June our kitchen welcomed a young deaf man who we hired as part of a program run by the Myanmar Chefs Association. We began training him on pastries and it’s going really well: among other stuff we can now leave him to make his own bread.

Many deaf people in Myanmar don’t even finish basic education because the system doesn’t help them, but sometimes qualifications aren’t hugely important. Everyone should be given an opportunity and be trained so they can fulfill their full potential. From a psychological perspective it’s very important we make sure he feels like one of us—not a deaf student or deaf chef, but one of the Orng kitchen team. Everyone in the team is learning more about their role and surroundings, and being kept busy by a stream of customers.

In recent days we’ve turned down bookings, especially on the popular seafood nights, which started as a one-off but have now become a regular feature: next one’s on Friday, June 20. Another regular-in-the-making is one of my favorite meals—a Sunday roast. My first job in a kitchen was with The Sun Inn, a pub in Scotland’s capital Edinburgh. They did a standard Sunday roast but with everything done the proper way, with care and attention. It was the first dish I started to enjoy in the UK. You get the Yorkshire pudding and fold it over meat and gravy then squeeze it like a sandwich.

Ours will be traditional, with potatoes cooked in goose fat. We’ll serve the beef, pork or chicken separately and then bring out all the trimmings (mash, cauliflower cheese, Yorkshire, jug of gravy etc…). More meat will be brought out if you’re still hungry. We won’t be changing the shape of the Yorkshire pudding but expect it to be a bit fancy. Roasts are more about bringing the family together than boozey brunches.

We’ve got a huge space with a garden and a lake with ducks that the kids can explore. It will run from 11.30am-2.30pm and you can also catch us at the European Food Festival at the Rose Garden Hotel on Saturday, July 28. We’re showcasing three of my signature dishes. My regular customers may know what they are but I won’t let on here: you’ll have to come see!

5 new eateries worth your visit