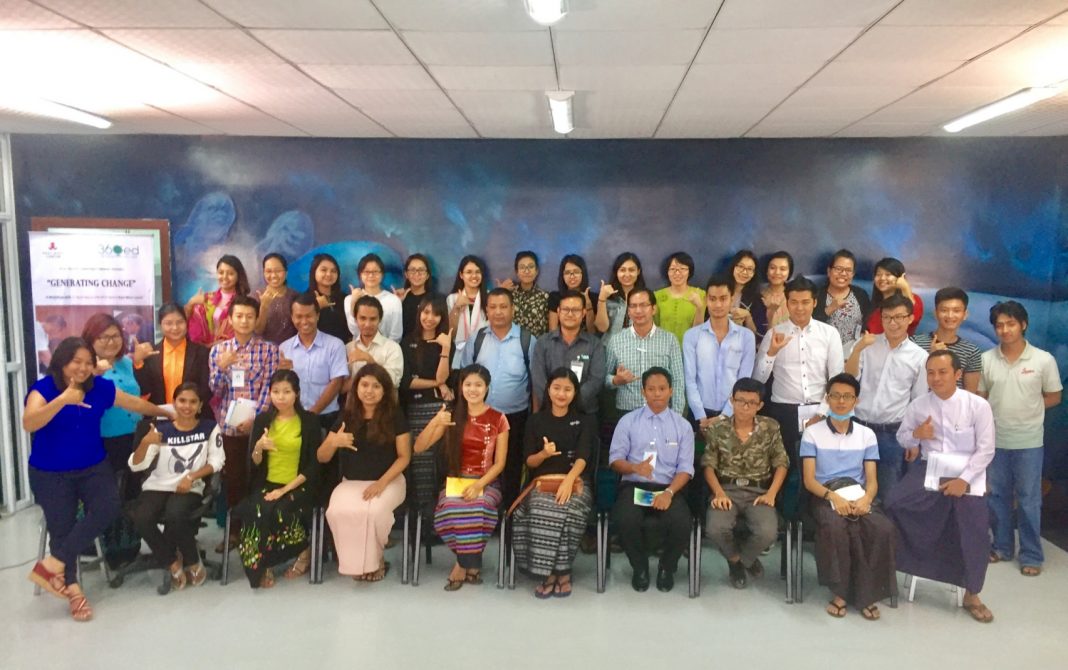 Blink your eyes once, and you’ll see a new building in Yangon.

Myanmar is currently going through a lot of changes during the past few years; you will see all kinds of new businesses in every corner of the metropolitan Yangon city both from foreign investors and local young entrepreneurs.  These rising entrepreneurs are full of creative ideas and,without doubt, are the future leaders of the country.

However, to be a successful leader of a country or a business, one needs to be well equipped with three key leadership skills such as strategizing, Decision making, and Influencing.

“We want to help the people we’re working with and we want to learn from them. We focus on the 3 Gs in Asia: Generation, Gender and Government” and Myanmar is an important place for all three,” said Dr. Scott Macleod, the Director of Leadership Programs, and APLP Alumni.

During “Generating Change”workshop, he stressed the importance of a leader’s decision because it can affect others’ lives. He said that people try to make logical/rational decisions, but a lot of decisions are influenced by emotions (e.g. fear, love, and power), biases (heuristics) and risks (cost and benefit). Therefore, leaders need to love complexities; they need to explore, learn and ask questions.

The second topic he talked about was the use of strategies. A leader should be able to tell stories because stories help people make sense of the world when data does not. A lot of decisions are made after hearing all the stories from one’s company, family or friends. Thus, a leader has to use the story telling strategy, and understand what kind of stories to tell to their followers to reach a successful goal.

The third topic was Influence: leadership without authority. This seemed very controversial. How can one lead without authority? The participants brainstormed their ideas and came to many ideas on how to influence either our boss, family, anyone with higher authority. Finally, we all came to learn that “trust” is the root of influence. Only when our bosses trust in our ability, will they listen to our opinions and at that moment, we will have gained influence.

For Macleod, it was not only a teaching session, but also a learning session.

“This is especially an exploration; through these workshops, we work with the group of people and figure out what works with them and what didn’t. We convene meaningful conversations from people and when we do that, we learn the things they’re thinking about, and hearing about it from them is much better than reading statistics, and journal articles,” he noted.

Through his exploration in Myanmar, he saw Myanmar as a country going through a lot of changes.

“Generally, in Asian model there’s hierarchy, patriarchy, authority, is all that made the system works, but now the new generation wants voice, women wants voice, and people expect the government to be interactive. So really what we’re going for is the new voices. That’s what why we’re looking at the three Gs, to explore that change,” he explained.

The workshop was held at 360ed, a social enterprise based out of Singularity University in Silicon Valley. It leverages advances in virtual reality and augmented reality technology, 360ed provides 360-degree films of exemplary classrooms from around the world for teaching professional development and enhancing learning material for students.

They offer 21st century learning skills courses such as: Robotics Course, a robot programming and 3D printing course, and Maker Course, electronics automation with 3D printing. 360ed aims to provide the students of 21st century with the creative and practical courses that are rare in Myanmar, and the future of Myanmar depends a great deal on the millennial and post-millennial.

So the question is: Is Myanmar in for a better future?