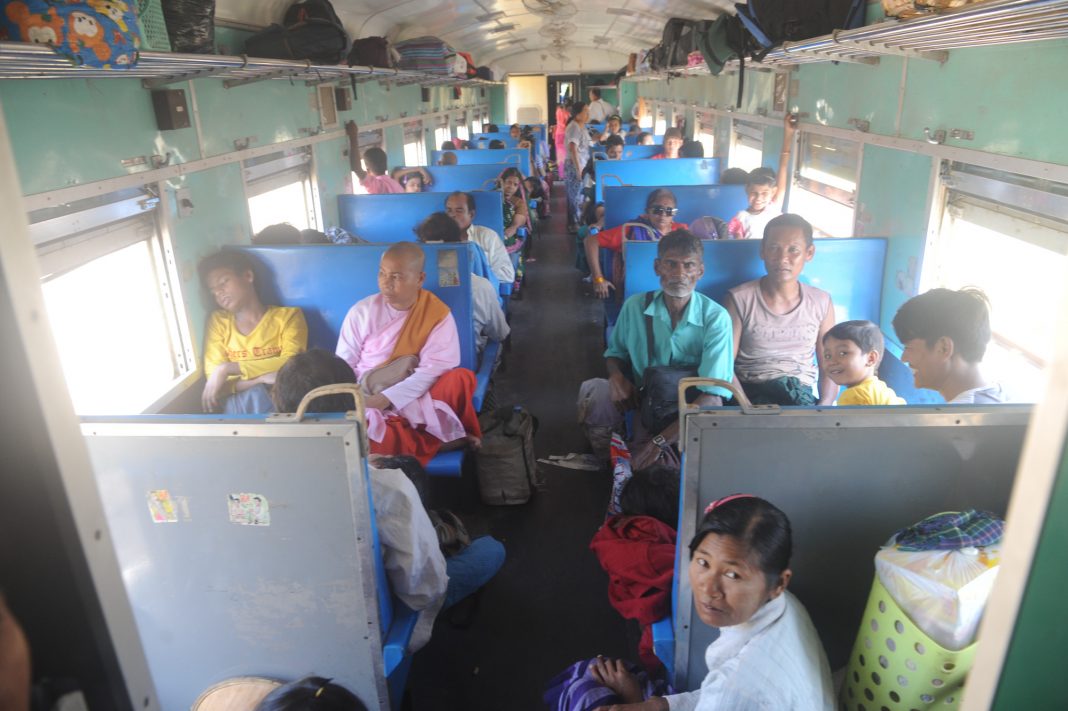 The Lonely Planet likens Myanmar train journeys to ‘going by horse, with the mostly antique carriages rocking back and forth and bouncing everyone lucky enough to have a seat on the hard chairs – sleep is practically impossible.’

For that reason, many tourists and locals avoid travelling by rail for long trips in Myanmar even though the price is significantly cheaper than VIP buses and flights. Given that road accidents are becoming more common and the rainy season has arrived, the train does seem to be the safest option. So on a Sunday morning, a bit bleary-eyed from the night before, I boarded the 11-Up train in the early morning from Yangon’s central station.

We trundled out of the station right on time at 06.00, through the suburbs of Yangon. I dozed off a bit in the cool morning air, not worried about missing out on this stretch of the ride that I had done several times on the city’s circular train.When I woke up, we were on the outskirts of Bago and vendors were hopping on the train to sell tea and breakfast snacks. This was always my favourite part of the journey- although the scenery viewed through the windows was stunning, the scenes inside the train were what captivated me the most. I sat back and sipped my tea, watching the vendors haggle their wares and the passengers- which ranged from monks to families with young kids- board the train.

We then set from Bago station with a lurch and a rattle and continued our way north. The day unfolded in a similar pattern, miles of spectacular countryside and tiny villages interrupted by lively stops at ageing stations. In most places, just a few passengers were boarding and disembarking but in larger stations, such as Taungoo, the train lingered longer for more passengers to join and for goods to be loaded.

I was loving the overall experience, but I admit that the not-so-romantic image of train travel painted by the Lonely Planet did hold true. Whilst trains in nearby Thailand, China and Vietnam are comfortable means of transport, Myanmar Railway is actually akin to the Lonely Planet’s description of ‘going by horse’. It is slow, hot and bumpy.

The upper class seat I was in was perfectly acceptable: wider and softer than any airline seat with lots of legroom. But despite the thickness of the cushions and the size of the chair, the bumpiness is hard to ignore. Built in the 1880s, the rail lines have had little in the way of upgrades so the cars sway side to side and ‘skip’ up and down along the tracks. This has been reduced a bit on the Upper 5 // Lower 6 trains which have special suspension cars but it still does not make for an entirely smooth ride. There were times where I felt I was levitating out of my seat and, on more than one occasion, it appeared that the car in front of us was going to tilt off the tracks and pull us down with it. Bags slid off overhead racks and, having removed my slippers, I found them almost two meters away when I decided to put them back on!

The bumpiness is tolerable on shorter rides which is why Yangon’s circular train and the ride from Kalaw to Inle Lake remain popular. But undertaking a full day journey is a bit of a different story!

Instead of 8 hours in a smooth, air-conditioned bus, I was faced with 15 hours of bumpy, hot travel. The difference in time could be partially attributed to the increased number of stops on the train route – but it is only one small factor. Outside of the cities, the tracks are so poorly maintained that freight trains are restricted to a 24 km/hour speed limit with passenger cars possibly even lower. But one friendly official on the train told me the real reason for the slow speed was the obstructions on the track. When I asked him to clarify he said that the conductors often have to slow down due to people and animals, mostly cows, walking along the tracks!

As the day carried on, the sun began to make itself be known. The carriages do not have air conditioning but the cooler morning air plus the gentle breeze created by the train’s movement. But this lead to a few short naps, lots of lazy reading time and an almost forced relaxation that is increasingly hard to find in this ‘always-connected’ world. My fellow passengers shared snacks, I bought cold drinks from vendors passing through and learned the value of a good hand-held fan!

Darkness fell around 8pm, traveling the last hour in to Mandalay in the dark. With the bright interior train lights acting like a beacon, a steady flow of insects were flying in through the carriage’s windows. But thankfully a vendor jumped on selling cold Myanmar beers and my worries drifted away as I enjoyed the final leg of the journey.

The train’s whistle – and its brakes- gave a few last screeching calls, signalling the approach to Mandalay’s main station. My fellow passengers grinned as they gathered up their items, looking tired but happy to finally be putting their feet on solid ground. The journey was both beautiful and fascinating. And while I would not complain about a smoother, faster ride, I would certainly do it again- perhaps saving my next train adventure for the cooler winter months!

Tickets can be purchased in person only 3 days in advance. Or use an online agent such as www.go-myanmar.com