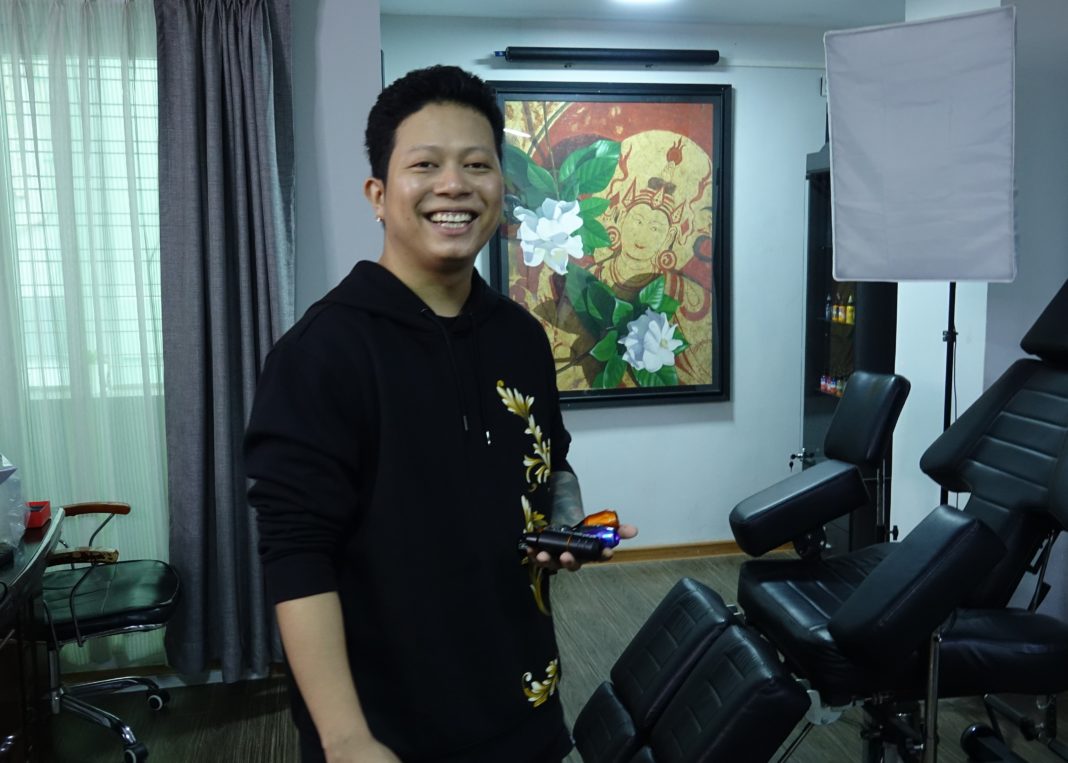 With the needle as a paint brush and skin as a canvas, he creates something magical

It was raining when we arrived at Ka Gee’s tattoo studio. It looked like a mini art gallery with the four walls covered in paintings he collected.

Ka Gee whose birth name is Aung Kyaw Hein has an easy smile and outgoing personality that matches it. In our conversation, the father of one reflected on his life and profession.

Ka Gee always knew he would become a professional tattoo artist one day. Born and raised in Yangon uptown, he spent most of his childhood painting and reading.

“I’m an only child. I started drawing when I was five years old. You know hobbies are the best playmates for people without siblings,” Ka Gee recalls.

He came to know tattoos from his older cousins. Inked skins might look rather curious in the eyes of the young prodigy.

Although he thought tattoos were awesome, he did not dare getting one. As an avid reader, Ka Gee was aware that infectious diseases like AIDS can spread via unclean needles.

After graduating he had worked as a salaryman but never abandoned his passion for art. In 2012, he quit his job with an idea of making a living as a tattooist.

“I had like Ks500,000 in saving (the exchange rate was around Ks800 = US$1) then. Internet and online shopping weren’t as common as they are now. I ordered a tattoo machine for $65 through an online shop. It cost me around Ks100,000 plus tax and service fee. It was my first step.”

In the Burmese alphabet, Ka Gee (က) is the first letter. He chose the name for his career since it resembles being the first or prime in his field

He never had any formal training in art and rather taught himself from YouTube videos and fellow artists. Ka Gee believes in learning by doing and names all the seniors in the industry his mentors.

“In the early days, I practised tattooing on my skin. No, I never worried it might turn out ugly. I was sure that my work would get better one day and could fix them then,” says Ka Gee, looking at his tattooed arms with the pride of a knight in his armour.

Today his clients constitute ordinary people and celebrities as well as locals and expats. He produced his own creations as well as the ideas of the clients.

Myanmar is one of the countries where tattoos are frowned upon. Job seekers would find it hard to get employment if they have visible tattoos.

When asked about his view on tattoo stigma, Ka Gee replies: “When I started inking myself as a practice, I was aware it would cost me many job opportunities. I think people find tattoos distasteful because they often associate them with transmission of diseases. To change their view, we have to change ourselves first.”

The tattooist explains about a lengthy procedure of safety measures he has put in place like wrapping the machine from the handle to the end of the power cable in plastic, using the equipment only once and spraying antiseptic after each session.

“When I was young, I didn’t dare to get a tattoo because I was afraid of infectious diseases. I believe many people have the same fear as I did. That’s why I have given extra attention to safety since day one.”

He admits that people have had a change of heart regarding tattoos in the past three years. Some of his clients who got their first tattoos in their 50s said that they had misunderstood the practice in their youth.

The industry itself has been evolving over the years. Gone were the days of sub-standard ink and equipment. Now most professionals can import the certified products themselves thanks to the more widespread internet and easier access to overseas travels.

“I can still recall the days I purchased the ink in penicillin bottles. They had no guarantee or whatsoever. You got the black ink that turned grey on the skin. Since they didn’t say anything about the effective ingredients, people suffered from skin allergies a lot. So I tried to get in contact with the authorised dealers and had imported the stuff myself.”

Although many Myanmar people view tattoos as rebellious, the country has a long history with the ink.

In the ancient times, the tattoos, or Htoe Kwin, on thighs are a sign of masculinity among Burmese men. Htoe Kwin is a traditional pattern consisting of the mythical creatures such as Belu, Kinnara, Garuda, etc. But this tradition is fading.

“Most people see dragons and phoenixes when they think of tattoos. But tattoos are multicultural. From Polynesians to Japanese, you may find unique patterns and styles in each culture. Burmese people also have their own pattern: Htoe Kwin. In my career, I’ve inked it to only one client. Ironically he was a foreigner.”

The tattooist has about 50 ongoing projects among which some can take up to a year to finish. COVID-19 cannot stop the ink addiction. He has taken extra measures to sterilise his workplace and restricted the number of people allowed in each session.

He says photorealistic designs are in trend. Clients love getting the important people in their lives tattooed on their bodies as realistic as possible. Abstract designs are the least favoured, he says.

“My advice to people who are thinking about getting a tattoo is to imagine a design that is unique to you. Take inspiration from your life and experience. Create something that has never existed before. If I can’t materialise it, I will consult with someone who can. Just don’t limit your imagination. It’s your tattoo. It’s your personal history.”

Ka Gee has a wife Hnin Lwin Thu and a son Lu Maw Nyein and is living in Yangon.