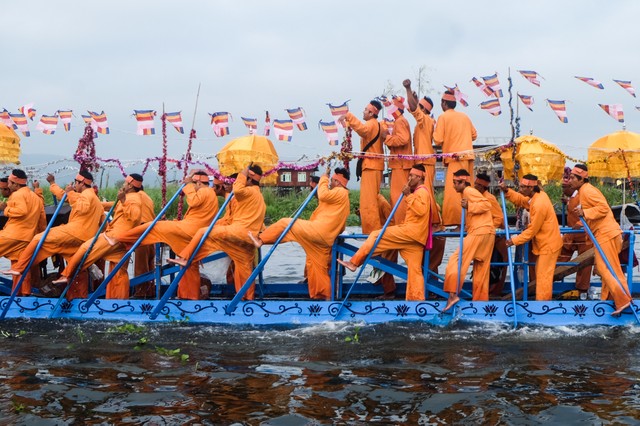 Hundreds of boys and men dressed proudly in their matching Shan trousers and crisp white shirts, row in perfectly synchronised movements like a beautiful machine. They glide along the surface of Inle Lake to the raw beat of traditional Shan drums and crashing symbols and gongs. The long boats- each less than a metre wide and over ten metres in length- are decorated with Buddhist flags and various levels of glittering tinsel and htees, or decorative umbrellas.

Hpaung Daw Oo Pagoda Festival, which is also known as the Inle Lake Boat-Rowing Festival is celebrated for 18 days leading up to the full moon of Thadingyut falling usually in September or October.

It involves long, decorative boats rowed by teams of over 100 rowers, each boat representing a different village on the lake. The boats form a procession which guides an ornate, golden hinthar barge carrying four sacred Buddha images from village to village.

It starts out from Hpaung Daw Oo Pagoda on the southwest shore of Inle Lake which is already a popular stop on the day-long boat tours of Inle Lake. Of the five Buddha images which are normally at this pagoda, one remains here for the duration of the festival while the four others are taken around the lake to the various villages. They spend on average one day at each stop. During the stop, the sacred images are placed in a pagoda at that village.

Nyaung Shwe, the largest town on the lake and the base for most travelers visiting the area, hosts the procession for three days. Each village on Inle Lake has at least one team to represent it. On any given day there may be between 25 and 55 boats leading the procession. Most teams are ethnic Intha but as the festival moves towards the lake’s southern shores, some Pah-Oh teams join in from their respective villages.

Aside from the main procession of guiding the sacred hintha barge, the boats partake in races twice during the festival. Falling on approximately the 7th and the 19th day of the festival, they are particularly exciting to watch. The winning team all the race wins between 1 and 2 lakh.

As with all Myanmar festivals, there is an element of blaring music, dancing and lively merriment. Many boats have a team of musicians playing traditional music featuring a strong beat of gongs and drums for the rowers to move to. Others blare modern music from loudspeakers encouraging dancing and singing from rowers and festival observers alike.

The festival is a wonderful way to catch a glimpse of some of the many ethnic minorities of Myanmar performing an ancient ritual, dressed proudly in their traditional clothes and playing traditional instruments. Observing everything from your boat in the early morning chill and with a backdrop of wooden houses built high up on stilts over the lake make for an unmatched Inle experience.

Details for the best experience of this festival:

Arrange a boat and driver through your hotel or guesthouse. It should cost around 20,000 kyat depending on the distance of the host village from Nyaung Shwe. The procession takes off from different parts of the lake each morning, some setting out from far away in the southern parts of Inle Lake and may take up to an hour to reach. The procession kicks off at 7am and finishes at around 8:30am. Arrive early in order to get a good viewing position. As always, wear warm clothes for the early morning chills and bring protection against the sun for later in the day.