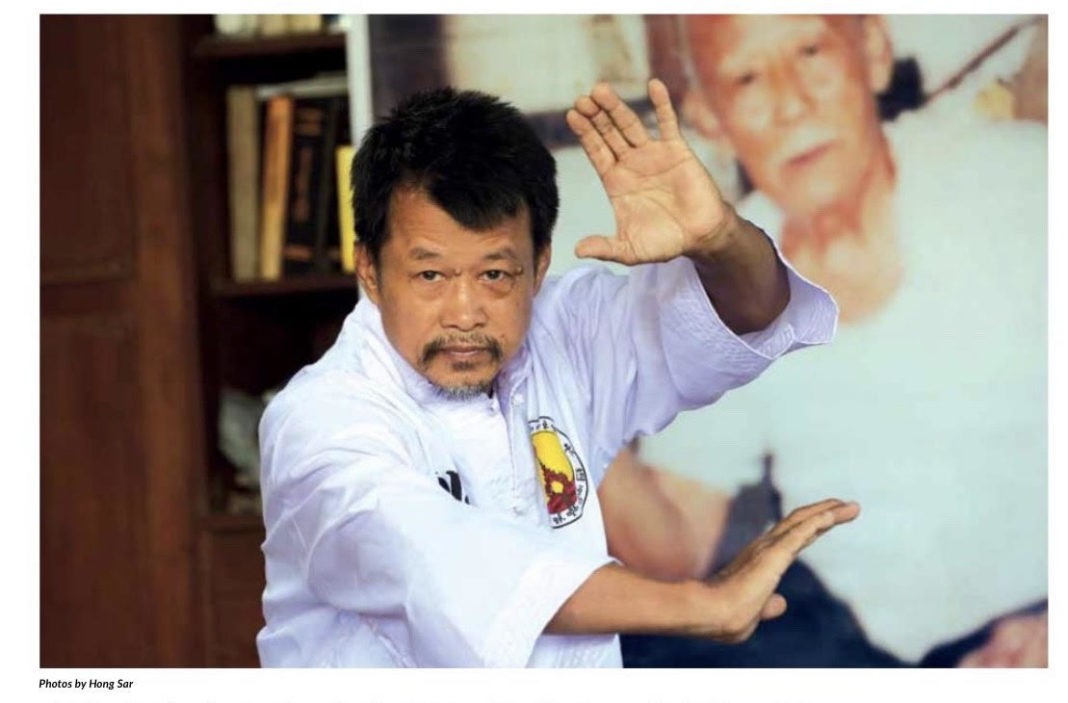 This article was published in InDepth(Myanmore) in November, 2015.

They say opposites attract, and it certainly is true of the Thaing Byaung Byan (TBB) Shan martial arts philosophy.

“It’s similar to yin and yang, push and pull, in and out,” said Aldrich, a long time practitioner of traditional martial arts and a three-year student of TBB.  “In the physical sense, that means if one hand is open, the other is closed. If somebody attacks high, you attack low. If somebody pushes, you pull him in. You use their power against them to redirect and break their energy.”

Thaing (“martial arts” in Burmese) Byaung Byan (“opposite” in Burmese) or Ku Kar Chant, meaning “reversed thaing” and “open and close” in Shan language, is a martial arts that adopts an open stance.

“Most martial artists cover their face and guard themselves to avoid attack, but in Thaing Byaung Byan, [our bodies and stance] are open.  If we are open, the other person will attack [if they choose to], so it’s like a trap, and then you close [the body] to block incoming attacks,” explained Aldrich.

TBB mimics natural human movement.  Saya Win Myint walks with his left foot and naturally swings his right arm.  He demonstrates that if a fly buzzes above your head, you naturally swat it away.  Add a small twist of the arm, and you get a basic block. If touched on your side, you would naturally swat backwards.  Adding more force is the foundation for a chop.

At its core, TBB is “not an nonaggressive martial arts because a lot of moves are defensive.  When somebody attacks, you block. When you see the defense, you chop and block away,” said Aldrich.

You the reader are surely grasping TBB’s moral life lesson.  Say, for example, somebody pushes you. There are two obvious choices: push back or step back.  By pushing your aggressor, you invite confrontation. By stepping back, you allow the tension to dissipate.  If the person still chooses to push, TBB shows how blocking and attacking can be one in the same, so you stand your ground without resorting to initiated violence.

Saya Win Myint said through Aldrich, who translated our conversation, “If you’re aggressive first, but you practice, you learn to control power.  If you control power, you can control your anger.” The hyper and aggressive learn patience and serenity.

Thaing Byaung Byan is a unique Northern Shan martial art that derives its roots from hundreds of years of unarmed Shan martial arts, which themselves originated in 678 BC and were influenced by Chinese and Indian martial arts.  TBB practices Bando (unarmed) and Banshay (weapons) techniques.

Grandmaster or Sayagyi U Maung Lay (1896 – March 21, 1985) is considered the founder of TBB.  In truth, he learned the style from Sayagayi U Che, who was a bodyguard to a Sawbwa (Shan prince or governor of specific plots of land) at the Shan State Kanbawza Palace.  No earlier history has been discovered regarding whether Sayagyi U Che created the martial arts techniques of TBB or if it already existed.

What is known is that traditionally, Shan martial arts are passed down only to Sawbwa and his family members.  As a result, very little of its technique has changed over time. However, when British meddling created an unstable political situation among Sawbwa, Sayagyi U Che, though not historically allowed to learn or teach martial arts, was afraid the practice would be lost.  When he left Shan State for Lower Burma, he selected three students to teach. Among them was Sayagyi U Maung Lay, who is singularly responsible for spreading TBB to others, including Saya Win Myint.

Growing up in Myaung Sone Village in Bago, Saya Win Myint’s body build was “quite small, and in the village, there were a lot of big guys at six-feet tall.  They bullied me, so that’s why I wanted to learn martial arts so I can defend myself.”

After observing several styles, the “well-roundedness” and systematically similar hand and weapons movements of TBB was what attracted him.  At 18 years old, he began practicing under the tutelage of Saya Tate, who was at that time still a monk.

“Teachers choose each student based on personality.  To become a student, the student needs willingness to learn and practice,” he continued.

In 1976 at age 22, Saya Win Myint moved to Yangon for deeper training by the Grandmaster himself, Sayagyi U Maung Lay.  He simultaneously started a dying and screen-printing job, which he continues today as his main profession.

In addition to a personality test, potential students customarily challenge their desired mentor.  “I tried to control the wrist of the Grandmaster. I took him by two hands at his wrist to see if the Grandmaster could break [my grip] and to see how strong the Grandmaster is.”

As Sayagyi U Maung Lay continued teaching TBB up to the day he passed away, it has only been through death that Saya Win Myint has surpassed the Grandmaster’s strength.  The two were never competitive, though; in 1979, Sayagyi appointed Saya Win Myint as an assistant teacher and also took him in as an adoptive son.

Throughout their many years together, teacher and disciple/son traveled around the country for months at a time to train civil staff, military and police personnel, and both male and female civilians.  Individuals from “all walks of life” were warmly welcomed but strictly trained for four hours per day. Trainers themselves began at 7 AM and continued until 9 PM.

Upon Sayagyi U Maung Lay’s passing at the ripe age of 89, YCDC reclaimed the land on which the training center was built.  This has curbed formal TBB training and expansion of the martial art to which the Grandmaster dedicated his life.

“It’s very rare to find a training school or big space.  A lot of [my former students, now teachers] mainly teach as a hobby, so it’s not as before, we are not professional full time teachers,” said Saya Win Myint.  Those interested mainly meet privately at the residence of a nearby master.

One exception is Sayagyi U Aung Thein, a high court lawyer and one of the most senior teachers in TBB.  He oversees a TBB school in Thanlyin near Star City, not too far from downtown Yangon.

“I would recommend it to any expat who wants to experience group training, mainly with locals and to get out of Yangon and see rural life,” emailed Aldrich of his first instructor’s school.

For more information on Thaing Byaung Byan and to contact instructors, visit the International Thaing Byaung Byan Association’s website at www.itbba.org.  ITBBA holds training camps and classes in London and Yangon and additionally is practiced in the U.S. and Australia.