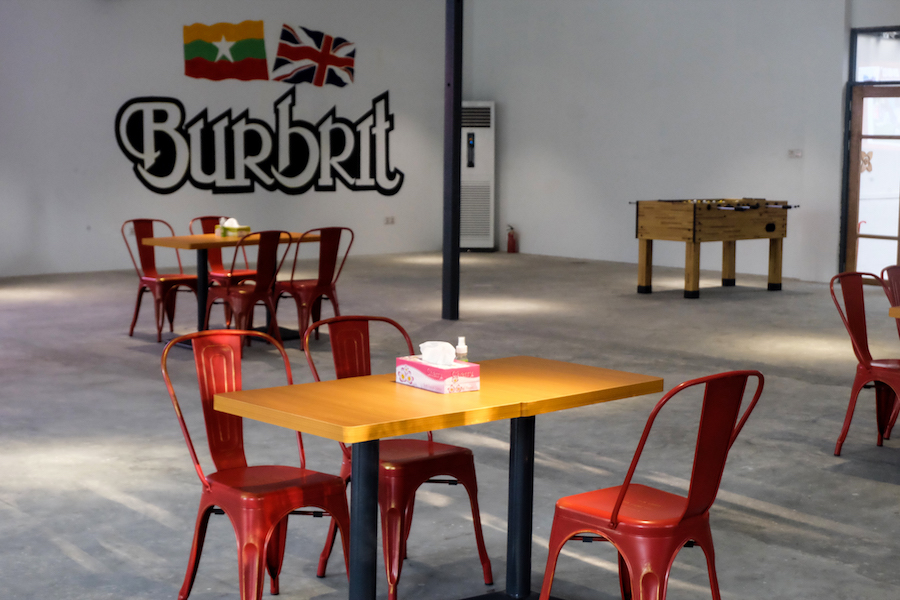 A year after opening Myanmar’s first microbrewery, the team behind Burbrit has another haven for craft beer enthusiasts.

Burbrit Taproom is tucked down a leafy lane near the Thai Embassy and Marina Restaurant—nearer to the downtown action than its riverside sister venue in North Dagon Industrial Zone.

In design though, the taproom has stayed close to Burbrit Brewery with the continuation of an industrial-themed layout: think sparse space, concrete floor and graffiti flanked by iron-and-glass walls.

One of the founders, Maung Zaw, told Myanmore that Burbrit Taproom would be the new flagship establishment for the brand.

“It is kind of like a dream come true,” he said. “Three months ago we found this place, of course we started renovating.”

The taproom was previously a tea shop where staff from the Thai Embassy would eat samosas and sort visa applications during lunch.

Then last year a restaurateur cleared the space and began building an eatery. When that project fell through, Burbrit moved in and painted on the wall its logo and the two fluttering flags of Myanmar and the United Kingdom.

The flags and the name represent Burbrit’s three founders from Myanmar and one from the UK (Bur for Burmese, Brit for Britain). In their new setting is a garden area covered by an overhead shelter and a non-smoking sports room with table football, darts and a huge projector.

Beers include a German Weizen with tones of banana; the clean, crisp Shwe Ale; the malty Burma Pale Ale; the robust London Porter; and Rangoon Blonde, a bitter and refreshing tipple.

All are made according to the Reinheitsgebot, or German Beer Purity Law, a centuries-old Bavarian law that lists the only ingredients for beer production as water, barley and hops. Yeast wasn’t discovered at the time, but was later added.

The taproom also has a fresh apple cider and—delivered on Fridays—flavorful and unfiltered cask ale for 8,000 kyats per pint.

If the beers sound familiar it’s because the menu has stayed the same as Burbrit Brewery—in fact, the kegs come straight from there, as it has the company’s only brewing license.

The hops come from US-based YCH Hops and the range of taste and aroma achieved from tweaking the volumes of hops and yeast never ceases to amaze.

A menu of Myanmar-Chinese-Western options (chicken cheese burger 8,500 kyats, fried noodles 3,900 kyats) is available and, if you can’t make it, rest assured Burbrit is distributed to 26 outlets around Myanmar now, so you’re likely to catch it somewhere.