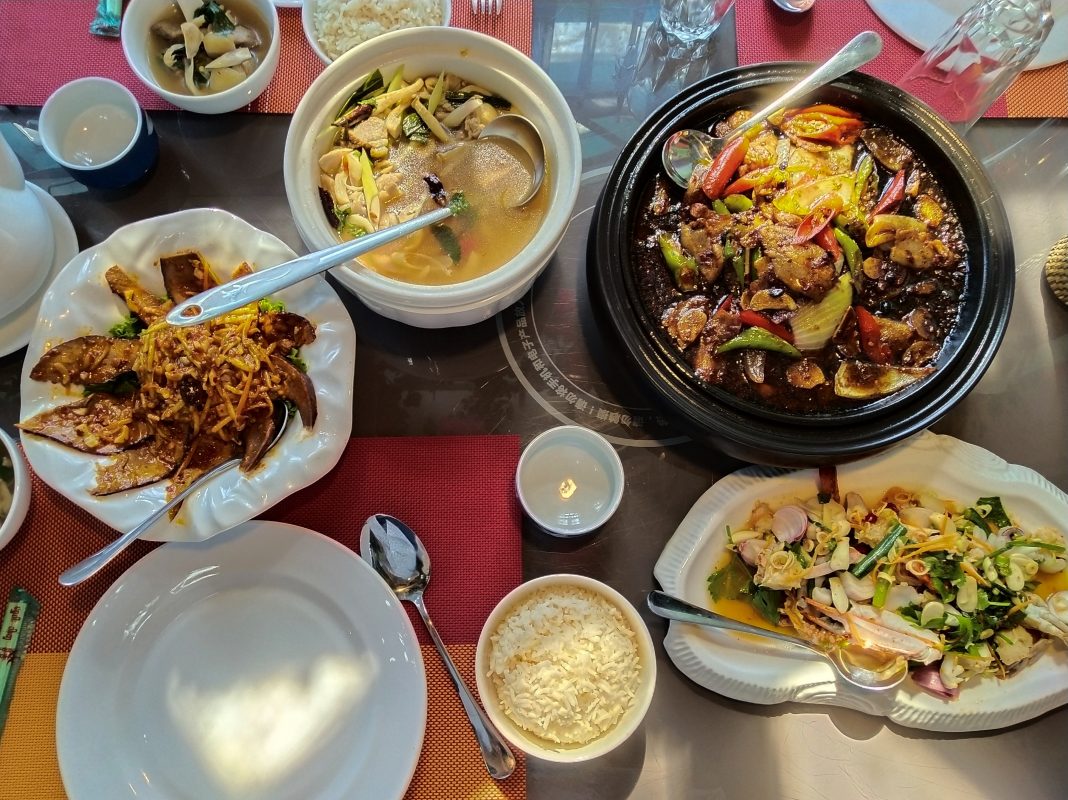 When Meru Windermere Square opened its doors in September, it was easy to dismiss it as just another fancy restaurant in Yangon’s more affluent neighbourhood. After a few months, it had grown into something more than a restaurant.

It hosted weekend markets for people to hang out and staged performances with Myanmar’s biggest pop stars, establishing itself as a community place where the middle class can also feel at home.

Concept-wise Meru is a one-stop dining experience where diners can enjoy different cuisines or chill at the bar. It also doubles as a venue for weddings and social events.

We visited there on one pleasant day in December for lunch. It was a public holiday but the room was half-filled. There were a number of menus: Thai, Chinese, Indian, Burmese, Shan, etc. We picked Sichuan-style Beef Tongue Salad (Ks13,000) and Porkbelly with Black Bean Sauce (Ks10,000) from the Chinese menu and Spicy Seafood Salad (Ks14,800) and Pork Leg Tom Yum Soup (Ks11,800) from the Thai.

My colleague and I explored the menus while waiting for the meals. It had dedicated menus for beverages, breakfast and set meals. The latter began at Ks85,000 for five people and included six dishes with steamed rice, Thai desserts, selected soft drinks and water.

After 10 minutes of waiting, the soup came first. Then it was followed by the other dishes. The total waiting time was around 15 min. We ordered two bowls of steamed rice (Ks1,000 each) and a pot of jasmine tea (Ks2,000).

I began the feast with a piece of braised beef tongue salad. The meat was tender and the salad included strips of cucumber drenched in Sichuan-style sauce. It tingled the tastebuds at the first bite. The taste was sweet and spicy with a hint of Sichuan pepper.

Porkbelly was stir-fried in rich black bean sauce, red chili peppers and veggies. The sauce gave the meat a rich texture and sweet smell. Its sauce went perfectly well with rice, too.

The heavy taste of the pork was balanced out by spicy and sour seafood salad. The salad included a medium-sized flower crab, shrimp and cuttlefish. The smell of lime was quite refreshing. It had a kick to it, so don’t forget to ask the staff to tone down the spiciness level if your stomach does not agree with hot food.

Spicy Tom Yum Soup was clear in colour and had a generous mix of mushrooms and diced pork. With a pleasant trace of lemongrass, it served as a great palate cleanser. It was not that spicy, too.

The prices were not cheap but you got more than what you paid for. The portions were generous — they could easily feed four people. My favourite was Sichuan beef tongue salad and my colleague said she fell in love with the soup.

The experience was nice. We really enjoyed our lunch. It would be better if the management could find a way to get rid of a few flies that visited the table. We know most restaurants found pest control troubling but it was a plus if you could manage it.

After the meal, we toured the place. The building was quite spacious with smaller rooms and one big hall that could host at least 50 tables at once. There was a bar and a karaoke place in the basement. The private rooms named after flowers can be rented for Ks10,000 per hour. The terrace was great for outdoor dining.

To wrap up, the meals were delicious and filling, the staff attentive and the prices reasonable. I might visit again for beef tongue salad and you really should try it, too!

The Reading Room: Home away from home