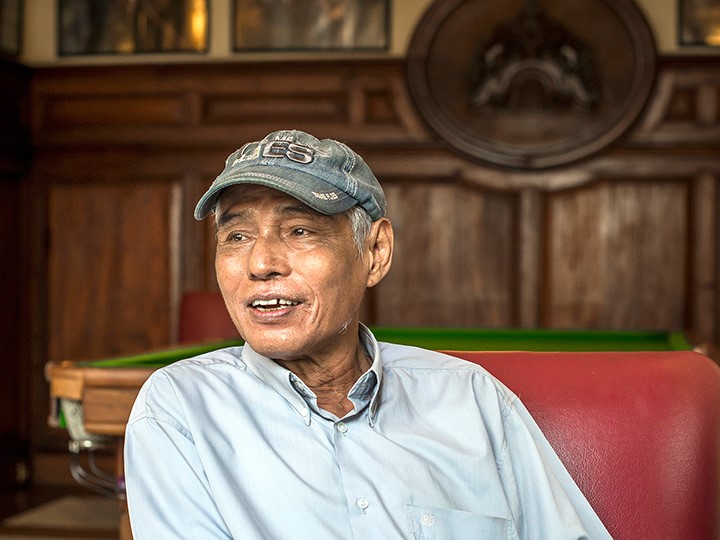 On the 9th of August, Aung Cheint, a well-known avant-garde poet passed away at the age of 73. “The pen is mightier than the sword,”- Edward Bulwer-Lytton’s phrase perfectly portrays Aung Cheint. He is, after all, a revolutionary poet.

Young Aung Cheint showed no interest in learning formal education. However, his attention was focused on literature, poetry, and politics and he preferred to spend the majority of his time in student unions and events.

“I would be absent from class twenty days out of a month. So were my friends. I wanted to taste the world even when I was young. I didn’t have much money. But with the little money I had, I would take trains to the outskirts of town and see life around me.”

The world starts to turn upside down as the military regime began in 1962. The only happy moments exist in teashops where he and his friends exchanged their ideas and share their views on poetry and politics. This was common for young people as only government personnel was employed at the time.

Aside from the tea shop, he spent much of his free time volunteering as an editor for Moe Wei Magazine. Occasionally, he and his friends would contribute and publish a few collections of poetry together in the magazine. In the 1970s, they were known as a Moe Wai group.

The public favors the Moe Wai group’s poetry since aspects of politics are veiled within. Although it was against the law to publish them, it was revolutionary for the country.

“You became a better poet by thinking about how to get around the censor. Many of us were good enough, clever enough, witty enough to outsmart the censor. It was not possible to just follow the government and write what they wanted you to say. That is not a way to create anything of value. My definition of political activism is standing by the side of the oppressed and disadvantaged, not with the government, whoever they are.”
(The Irrawaddy, Petr Lom & Khin Aung Aye)

The military arrested more than one hundred poets who were part of the revolution. Aung Cheint was only sixteen when he was held captive for fifteen months (including three months in solitary confinement).

“It was during this solitary confinement that I started to compose poems just in my mind. This is what helped me survive. Writing poetry was a way of distracting the mind; a way to keep sane.”

In MYANMORE Cover Story,  ‘A Very Modern Poet,’  Cheint describes to Bob Percival how he wrote poems in jail.

‘He would, “pick off pieces of lime mortar between the bricks of the wall.” He started writing his poetry on the floor. He would commit the poems to his mind before they disintegrated into white dust. He would then turn up his mattress and on the floor underneath, “would very gently write his poem with a nail so it was so faint you could only see it by its sideways reflection.” Again he learned the poems by heart. Then when released from his solitary cell, went back to the prison hall with the other prisoners, where he could write his poems down properly. “This is the only thing that gave me the power to live on,” he relates to the translators.’

Surprisingly, Cheint has had an interest in painting before he got into poetry. He visioned himself as an artist, but he got a deep connection with poetry during the sentence.

“It struck me. It picked me. From that time poetry became my life. Poetry is my daily life. Myself and poetry can never be separated,”

Although he didn’t pursue to be an artist, creativity never left his side. He was one of the first poets to introduce a modern era where he brought a new freeform element instead of a traditional approach.

It was rhymeless and rhythmless, yet the expressions and emotions were amplified. It touched many people’s hearts.

For Cheint, poetry comes naturally as if it was part of his daily routine. He never forces himself to write poems. When an idea comes into his head, he writes them down immediately.

In an interview with The Irrawaddy, he gave a piece of advice to future generations of poets. He states:

‘Your poems must improve every day. Don’t be pleased or satisfied with what you already have. You must know there is something better, something unachieved, behind what you have just created. Try to improve yourself after each and every poem.’

Rest In Peace Aung Cheint, You Will Live On Forever Through Your Poems. May your soul be reincarnated as a poet again.