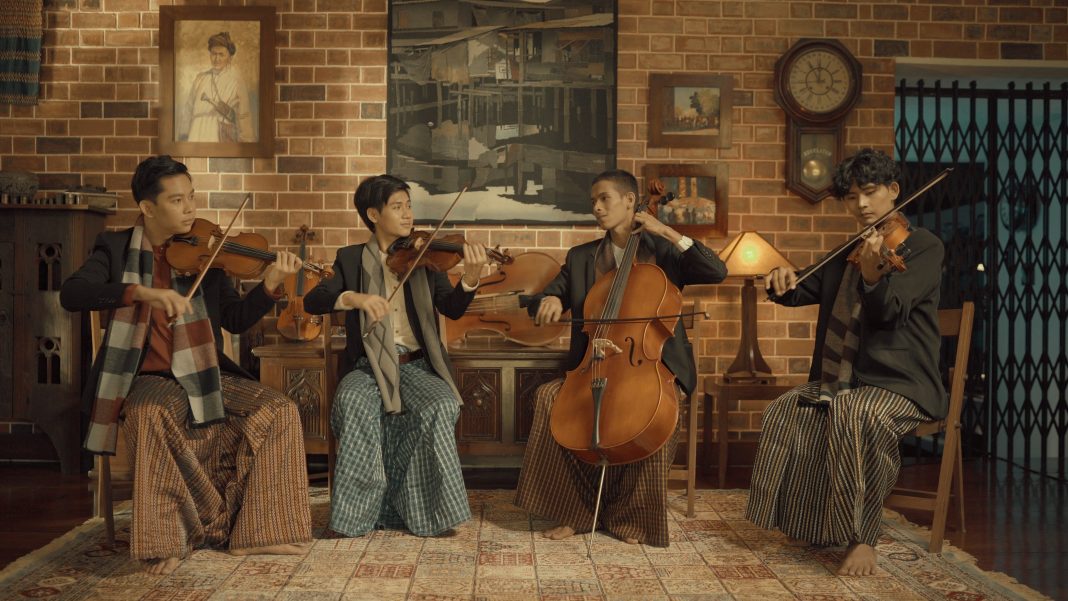 Myanmar’s music industry is never short of singers. With the prevalence of autotune and social media, the youths record EPs and share them on Facebook and YouTube. If they meet the audience’s taste, they go straight to stardom overnight.

But how do the instrumentalists fit in the age of computer-generated sounds? Burmese kings and nobles once pay handsomely for orchestras. However, it is increasingly uncommon to see such entertainment in modern showbiz.

Since the younger generation has lost touch with classical music, instrumental concerts have vanished from the mainstream and are refined to special receptions and ceremonies.

After seeing Epic Quartet’s violin rendition of a classic Burmese song Saung Ah Mhe (Before the Winter) on Facebook, I immediately visited their DM. The song tells about a woman who is writing to her lover in a faraway land to come back to her before the winter.

The four performers were dressed in vintage attires while the video itself was made in a retro theme to reflect the longevity of the song.

Although the song is decades old and fits the profile most Myanmar youths think as boring, the rendition video was surprisingly well-received by both the older and younger netizens. So, does it mean classical music can still find its place among the millennials?

Aung Myo Khine, who responded to this email interview on behalf of the quartet, says: “I get it the younger generation is preoccupied with modern music like pop and electro. But classical music is a centuries-old heritage. It is timeless and you always find something to learn and be inspired by it.”

He admits that most people are unfamiliar with instrumental performances. “We produce instrumental covers of classic songs because we want people to feel the taste of instrumentation.”

The quartet’s origin can be traced back to 2014. A violinist Sebastian See-Schierenberg founded Orchestra for Myanmar made up of musicians from all corners of the country.

Gitameit Music Institute alum Aung Myo Khine joined the Orchestra as a representative of his alma mater. His three other friends were delegates of the National University of Arts and Culture.

Epic Quartet was formed in 2017 after the four performed a string quartet under the guidance of an Austrian violin teacher Gabriel Rendel at a concert.

Aung Myo Khine and Saw Htet Shine play the first and second violins respectively. Ye Phyo Kyaw is on viola and the cello is entrusted with Hsat Paing Hein.

“Since our commencement, we have performed around 50 concerts. A lot of memories, too. Sometimes, we had to adjust the strings that got loose unexpectedly during the performance. Mistakes like hitting the wrong note happened in our rookie days,” says Aung.

The first violinist believes the practice makes perfect. They took a month or two for some pieces before the concert.

“During normal times, we used to practise once a week. Of course, we extended the practice hours if we have to perform familiar pieces for concerts. We don’t have favourite musicians, particularly. We learn from the experienced to hone our skills.”

So, how is the “new normal” treating the quartet?

“We have plenty of time since there is no concert to perform. On the bright side, it gives us more time to study and practise.”

The quartet is looking forward to producing both original works and covers in the future since the pandemic afforded them the luxury to think and study.