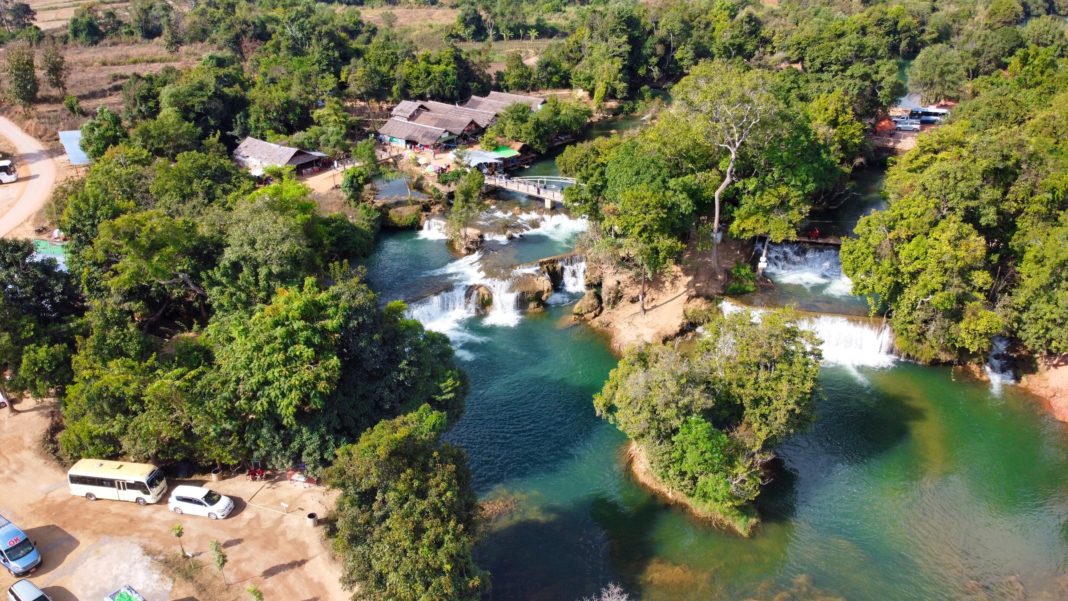 The smallest and least populated state in Myanmar. Besides the serene lakes and waterfalls, Kayah State is best known for a love story between a mortal and a celestial.

The sun is unforgiving in the hot season, March to May. June to September is the monsoon season and the average rainfall is 1,162 mm. The cold season begins October to February. You may experience the declining temperature in the evening throughout the night. The state capital Loikaw is relatively colder. The highest average temperature in Kayah State is 33°C in April and the lowest 25°C in January.

When and where to go

Kayah is composed of seven townships and is one of the least COVID-affected regions. The state is accessible year round but the best time to visit is dry season.

There is a beautiful lake called Htee Pwint, or Open Umbrella, in Demoso. It is located 14 miles away from Loikaw, the capital of Kayah State. The pond is famous because its mud bed bubbles up in the shape of an umbrella. It is said that if you see the umbrella coming up, you are a lucky person. The lake is also believed to be Boat Ta Lote Lake which played a major role in Kayah people’s origin story.

Dwe Mel Naw is a mythical half-human, half-bird creature called Kinnari (Kinnara for male). She is also the youngest daughter of the king of Kinnara.

The story goes: a prince Thu Da Nu saw a group of Kinnari taking a bath at the Boat Ta Lote lake. Charmed by their beauty, the prince decided to take one of them as a bride and hid the clothes belonging to one Kinnari.

After the bath, Dwe Mel Naw left behind to find her lost clothes and her sisters flew back to their kingdom in the clouds called Ngwe Taung (Silver Mountain). The prince came out of hiding and courted the girl. She immediately fell for him.

Kayah people believe they are the descendants of Dwe Mel Naw and Thu Da Nu’s children. Therefore, the state’s mascot is Kinnari and women dress in her style. The story of Dwe Mel Naw is still told to this day. One version of the story says the prince captured the Kinnari with a lasso.

A shrine and totem poles can be found in the vicinity of the lake. It is a sacred ground for Kayah people.

Naung Yar Lake, close to downtown Loikaw, is a scenic getaway for travellers and young couples. The wooden bridge connects the two sides of the lake is one of the most instagrammable places in Loikaw. People walk and exercise in the park around the lake.

The mountain is located in Loikaw. It is separated into nine peaks is the most important pilgrimage site and tourist attraction of Kayah State. It is officially called Thiri Mingalar Mountain and located in Loikaw. The local government had built a pagoda on each peak between 1895 and 1950. You can visit them all through interconnecting metal bridges.  It is believed couples who visited the mountain shall break up later. You are warned, love birds!

This place is the centre of ghost stories. The limestone cave is located 10 miles east of Loikaw. It is an ordinary cave except there are hundreds of wooden coffins inside.

The cave is believed to be a burial place of an ancient tribe. So far, 150 coffins have been found and the longest of them is 15 feet and shortest just 2 feet. Locals say the ancient tribe places the dead inside the coffin along with their possessions. You can tell the wealth of the person inside by the length of the coffin.

Skeletons were found inside the coffins but removed during the 1950s. But the coffins are still there. Some of them are lying on the ground and some hanging from the ceiling above 20-30 feet above the ground.

You have to first climb the hill through the stair to reach the cave. The shoes are not allowed near the cave, so be prepared to walk at least 100 feet barefoot. It is said those who took something from inside the cave were “haunted or worse”. Also, abstain from drinking, swearing, fighting, littering, etc. The cave is dimly lit, so do not forget torch lights. You can explore the cave from 9am – 4pm.

Drive 15 miles north of Loikaw to Htee Sel Khar Village and you will reach the waterfall. Originated in the northern Shan State, the waterway crisscrosses through the forests and flows into the Belu Chaung before merging with the Salween River. If you have a drone camera, please bring it. The waterfall is quite a sight to behold.

The Silver Mountain dam is located in Demoso Township. Ngwe Taung Dam not only irrigates over 6,000 acres of farmland but serves a go-to destination. It is an earthen or embankment dam surrounded by three mountains namely Gold, Silver and Ruby. The dam is over 50 years old.

Drive from Loikaw for two hours and you will reach the village of Kayan people famous for their long-neck women. Women of Kayan tribe wear 2-3 brass coils since 5 years old. As they grow older, the coil gets longer. A 20-year-old Kayan woman would wear at least 20 coils. The coils are not separated but attached into a long series of coil.

The purpose behind this tradition produces many speculations. Some anthropologists say it is to make Kayan women less attractive to other tribes. One assumption posits that the appearance of the long neck resembles that of the dragon, an important figure in Kayan culture. But the tradition is diminishing.

You can buy artisan ware at their houses. Brass coils and traditional clothes are also there for rent, too.