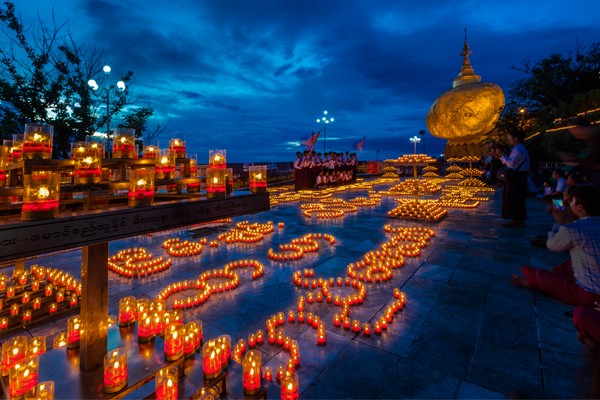 The last month of 2020 is already upon us. Phew, what a year! December is a festive season, but with you-know-what around, the festivities would be a small-scale, intimate affair with families.

The twelfth month of Gregorian Calendar coincides with the Nadaw month of Burmese Lunar Calendar. Usually, local people organise literature events where authors are invited to discuss ideas with and give lectures to the audience.

In ancient times, the seasonal festival was to honour Nat (spirits). But this tradition had vanished in 1885. In the year 1944, an entirely different kind of event emerged: a celebration in honour of the literati (Sarsodaw).

Since the government has yet to permit gathering more than 30 people, festivals are not likely to happen any time soon. Anyway, we have an Online Festivals Series in collaboration with Exploration Travel where we share a short story and pictures about each festival at the time it is supposed to take place but cannot due to COVID-19. We invite you to add your own pictures, stories and memories of the festival.

These are the festivals for December:

In 1920, on the tenth day after the full-moon day of Tazaungmone on the Burmese calendar, students from the Rangoon and Judson Colleges began protests against the British administration’s Rangoon University Act of 1920. This protest was a major catalyst in the Burmese independence movement.

The national holiday is a day to remember not just the 1920 protests, but also the key role played by students in the creation of modern day Myanmar. Usually, this commemoration is accompanied with stage performances and public lectures.

Ministry of Hotels and Tourism

This festival is celebrated for 8 days from the 8th Waxing (22nd) to Full Moon Day of Nadaw (29th) in North Okkalapa Township in Yangon. Prayer recitals last for 24 hours in this celebration. Locals participate in merit-making activities to provide aid to the temple and monks.

Rahine is another place rich with cultural heritage. Sandaw Shin Pagoda, located in Pauktaw Township, is believed to contain the hair relic of Buddha. The pagoda festival usually happens in mid December. But it was not held last year due to security concerns. The trustees said it would not happen this year, too, because of COVID-19.

Mahagiri Nat Festival is held in Popa Mountain, Mandalay. Unlike the Popa Nat Festival in September, this event is dedicated to Mahagiri, one of the most important deities in the Burmese Nat pantheon. Since this is the time of harvest, farmers in rural areas offer food to Nat (spirits) and wish for a bountiful harvest next year.

Ministry of Hotels and Tourism

One of the most iconic Buddhist places of worship in Myanmar, Every December, people of Mon State would celebrate the light festival at the Golden Rock Pagoda. The wellwishers light 9,000 candles and offer flowers to decorate the pagoda.