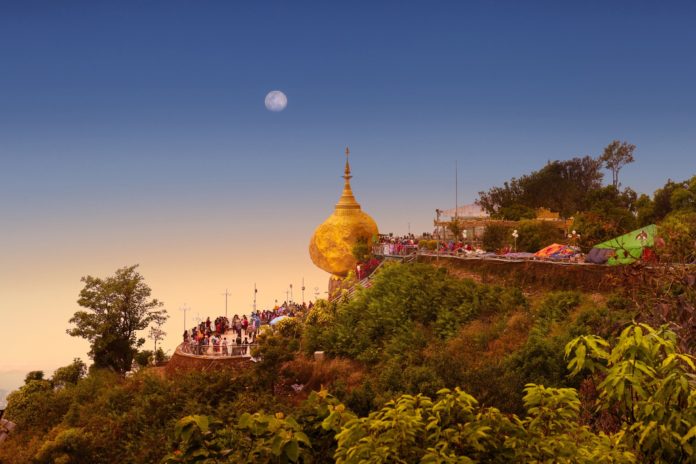 Rich with religious and cultural heritage, serene mountains and beautiful beaches, Mon State is also a place Buddhism emerged. It is a popular pilgrimage site and its Kyaikhtiyoe Pagoda is one of the most iconic Buddhist religious structures.

It lies between Kayin State to the east, the Andaman Sea to the west, Bago Region to the north and Tanintharyi Region to the south, also sharing a short border area with Thailand’s Kanchanaburi Province at its south-eastern tip. The state’s capital is Mawlamyine.

The major crops are rice and rubber. Since it is gifted with coastal lines, production of dried fish and fish paste is also common. It can be divided into eight administrative districts and the most popular destinations are Mawlamyine, Kyaikto, Mudon, Thanbyuzayat, Ye, Thaton and Paung.

Mon State has a tropical climate. It has temperate weather as it is located in the low latitude zone and near the sea. But the Kyaikhtiyoe Pagoda is located at a higher altitude, and therefore colder than most places. The average temperature of Mawlamyine in January is 78 °F (26 °C) and in April is 85 °F (29 °C). Annual rainfall in Mawlamyine is 190 inches (4.8 m) and in Thaton is 217 inches (5.5 m). Rain is especially heavy in July and August.

When to visit Mon State

It depends on what you expect from your trip. While Mon State is accessible around the year, the busiest time is December when the pilgrims offer 9,000 candles to Kyaikhtiyoe Pagoda in Kyaikhto. But other towns are worth visiting because of their natural landscapes and heritage buildings. However, Mawlamyine and Belin have been on the stay-at-home programme since September.

The capital of Mon State is the fourth largest city in Myanmar. The city was once famous for its Gaung Say Island where ancient kings visited to organise hair-washing ceremonies during Thingyan Festival. Since Mon State is historically Buddhist, Mawlamyine is teemed with pagodas and monasteries that are hundreds of years old.

The must-go is Kyaikthanlan Pagoda which is believed to have been cited by Kipling as “the old-Moulmein pagoda”. It stands on a ridge, giving a panoramic view of the city, and is surrounded by 34 smaller temples. Among its sacred treasures is a hair relic of Buddha,[23][24] received from a hermit in Thaton, as well as a tooth relic conveyed from Sri Lanka by a delegation of monks in ancient times.

You can visit Kyaikhto from Yangon overnight. The town is famous for its Kyaikhtiyoe Pagoda or Golden Rock. The pagoda is located at the tip of the 3,615-foot mountain. The summit is pretty chilly especially in the cold season, so don’t forget your jacket. You can climb the mountain on foot, by car or cable car. The trekking is recommended if you want to test your fitness and have some great time with friends. Then, you can visit the Saung Naing Gyi Waterfall which is eight miles away from that pagoda and let off some steam.

If you’re into bird-watching, this is the place to be. The mangrove forests near Thanton, Paung and Yangon Region are important for water birds and the resident species. The mangrove in Bilu Island of Chaungzone Township is home to Red-breasted Parakeet and Roseringed Parakeet, of which the first is near-threatened. Ahlap Village in Paung has a bird-watching station. Moreover, Zinkyike Waterfall is also a popular tourist attraction.

Once the seat of Thaton Kingdom, the town was often described as the semi-historical kingdom of Suwarnabhumi (The Golden Land). Now, it is famous for its golden temples such as Shwesaryan and Myathabeik. The latter is a hilltop temple which has 999 steps. If you can’t take it, there is a sealed road in good condition.

A town with a history, Thanbyuzayat is known for the infamous “Death Railway” that connects Myanmar to Thailand which was built during World War Two. Its affiliated museum has a collection of photos and a dramatic 3D painting depicting a scene from the railway’s route. But the town has more than the colonial infrastructure to offer. The visitors can enjoy the beautiful sunset at Setse Beach and relax at Welkali Hot Spring. Kyaikkhami Pagoda, which is constructed on the sea using the natural foundation of its ocean reefs, is a popular Buddhist pilgrimage site.

The queen regnant of the Mon dynasty, Shin Sawbu, built the Kyaikmaraw Pagoda whose stone inscriptions are rich in linguistic, religious, and historical information. If sightseeing is more of your interest, visit the Yepu Village famous for its hot springs and the limestone cave called Phabaung. The village is 24 miles away from Kyaikmaraw and the residents make a living from limestone works.

Photos are provided by the Ministry of Hotels and Tourism 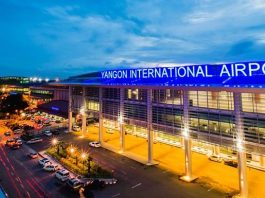 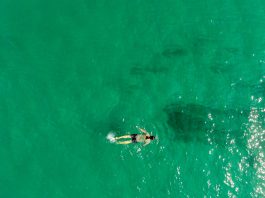