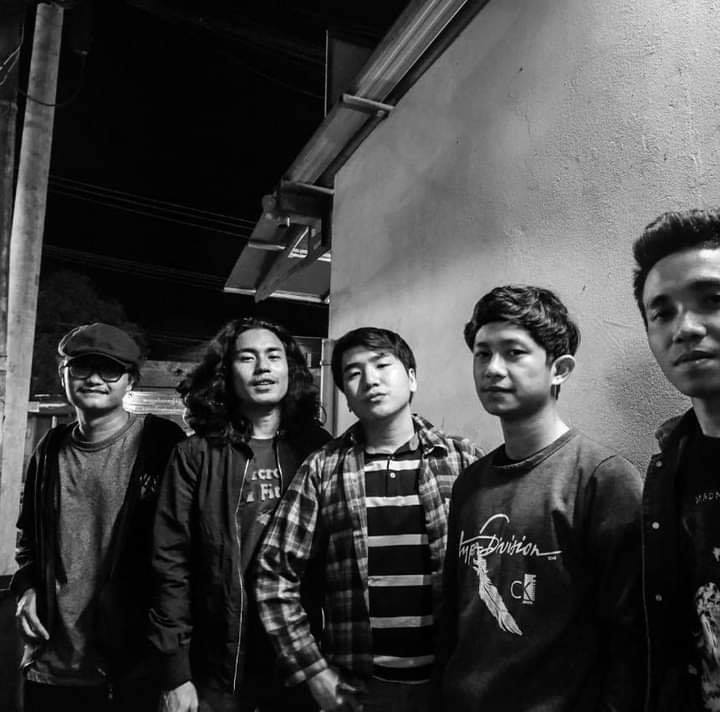 I was reminded of a recent article I did where the artist rightfully said that it doesn’t always matter if you don’t understand the lyrics of a song. A good song can take you places emotionally if it is well written and produced. So when I listened to the opening bars of the newly released EP from local band The Apple Jack I was swept back to a time when the charts were filled with guitar and synth-driven pop in the 80s and 90s.

The band was formed in Yangon in 2018 by frontman and guitarist Paing Soe. Since the beginning, the band have played regular gigs around the city including shows at The Voice of the Youth music festival and alongside the excellent Reasonablists when they launched the latter’s Day and Night album..

The Apple Jack draws inspiration from Myanmar rock bands of the 1970s and early 1980s, such as The Medium Waves of Khin Maung Toe, The Wild Ones by Sai Htee Saing, Seng Kham Leik, Khaing Htoo and more. They also say they listen to a few western indie bands. Certainly on the opening track လှပ there are echoes of everyone from The Cure to The Smiths.

The new EP has 3 songs recorded on a budget from cash they received from a gig just a week before the recording. There is no big flashy production here but what there is, while a bit rough and rushed at times, is pure joyful indie-pop in its feel.

Lyrically frontman Paing Noe, who wrote all the songs, says his words are poetic in nature like Burmese essays. He says all the words are chosen very carefully.

“For example, the first song “Hla Pa (Beautiful)” is the most Burmese lyrical song among them. Its chorus goes “Ti Ti Tar Tar A Kyin nar chit sagar, Kyin kyin nar nar tu tu wai mya…” like double-sided words in the same phonetics. It makes the song catchy and that’s where everyone sings along with them in gigs and concerts. It is about the beauty we can see in nature as there is beauty in human beings in which we see as the warm and close relationships, the empathy we share by helping each other, for example; “Nway htway swar kyo pr apyone nae…, ta yout myat nhar ta yout yae a pyone nae… hla pa swar wai mya a hla tayar kabyar tway” (Welcoming warmly with the smiles on each other’s face, sharing the poetry of beauty in us).”

He goes on to give me a synopsis of the last song on the EP which he says like many other of his songs is metaphorical “Lan Shout Htwet Khae Dal (Took A Walk)” was written about a blind man who wants to walk freely at night in the dark. He says he wrote it from the point of view of a blind man and how and what he could possibly feel or encounter.”

I imagine this band is at its best in a live setting but with the world in such a locked-down situation playing any gigs soon will be difficult.

“Based on the statistics, Yangon will not be comfortable to host live music right now. Many artists depend on social media and as Facebook is the most popular in Yangon and Myanmar I see live broadcasting from musicians here very often. However, we need something new.. it’s better if we could find something more intimate like new methods of hosting events in future. We are really hoping to enjoy gigs and concerts again in new normal styles.”

In the meantime, the band have started writing and recording the preliminary songs for a new album. Again they will do it on a shoestring budget.

“We will make the next album in a DIY mood so that from the beginning of writing songs and playing instruments to the final stages of mixing and mastering, it will be very special to create it all on our own.”

Personally, I will be right there when they play the first chord at the next live show. The band is still rough and ready but with time, a lot of live gigs and some more recording experience they will shine through and become a force to be reckoned with on the Myanmar music scene.

Photo credit to The Apple Jack.

“From Italy for Myanmar” with the Italian Embassy on November 14th