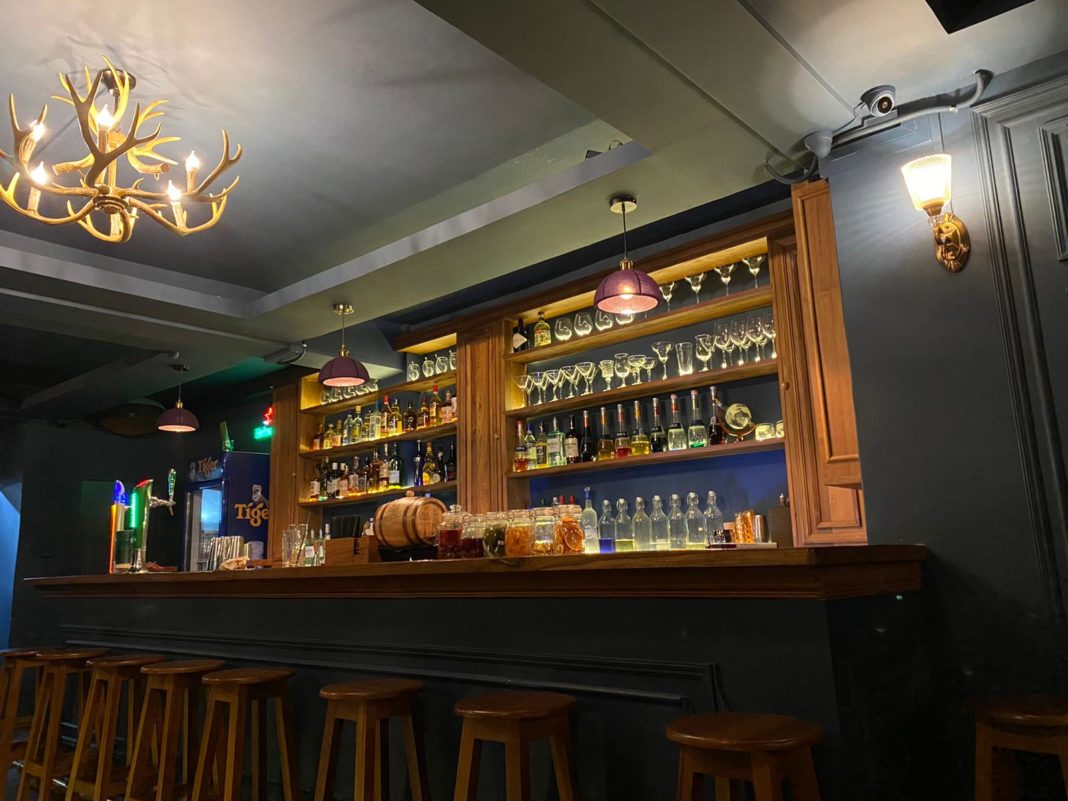 In search of a strong drink after a rough day, my friend and I headed to Redhill Blues on Sanchaung’s Zawtika Street. The venue is billed as a ‘prohibition-era style speakeasy bar’, secretive bars where Americans could sneak a drink when alcohol sales were banned in the 1920s. This style of bar has come back into fashion with modern-day speakeasies popping up in major cities from New York to Hong Kong and we were as interested to see how this concept played out in Yangon.

Like many speakeasy bars, both old and new, the entrance to Redhill Blues is obscure and we walked past it twice before spotting the dark blue door. Further adding to the secrecy, a keypad entry system is set up at the door and customers must call in advance to get the code, which changes nightly.

The interior is cozy, with low tables and sofas to seat around 40 with an additional 10 stools at the bar. Dark turquoise walls and the hipster-approved faux antler chandeliers created a nice vibe. Or would have had the music been better. The playlist of Bon Jovi cover songs was bad to the point of being amusing. At one point, the music stopped and the opening riffs of ZZ Top’s ‘La Grange’ played which was a far better soundtrack for a bar such as this. Sadly, the melodic joy was short-lived as the song stopped midtrack and fake Bon Jovi returned.

But we were at Redhill Blues to drink and so we got down to business and ordered. I opted for the first drink on the list: the bar’s signature Redhill Mules which was described as a mix of vodka and ‘homemade Centella gigger beer’. The drink arrived in a copper cup, as is customary for a Moscow Mule, and topped with Centella (pennywort) leaves. Ginger was the dominate flavour, confirming my suspicion that the menu had a typo, and the measure of vodka was large enough to provide a decent kick.

My drinking buddy sampled the Drunk By Mandalay Moat cocktail. Made of Mandalay Rum, local espresso, Pandan syrup and vanilla, this elaborate concoction of ingredients was the star of the night. It was a too small a serving to make anyone drunk, as the name would suggest, but the taste was dynamite. The bitterness of the espresso paired wonderfully with the rich rum and sweet flavourings.

Looking to order the next round, we were told that some of our preferred tipples were unavailable, so we opted for a classic Negroni and a draft Tiger beer. Having been impressed by the first two cocktails, I was looking forward to the Negroni. However, the bartender must have been a bit heavy-handed with the vermouth as the drink was sickeningly sweet. Thankfully my friend shared his beer which I used as a chaser to finish off the drink and wrap up our visit.

The cocktails at Redhill Blues range in price from 6,000 – 7,000 kyats per drink and draft beer is 2,000 kyats per glass. A small menu of snack items is available, such as French fries and fried pork ribs, to help soak up the alcohol. While my first experience at Redhill Blues was hit and miss, I would be willing to give it a second chance – but only if they change the playlist!

See the listings details here for address and map

The Reading Room: Home away from home