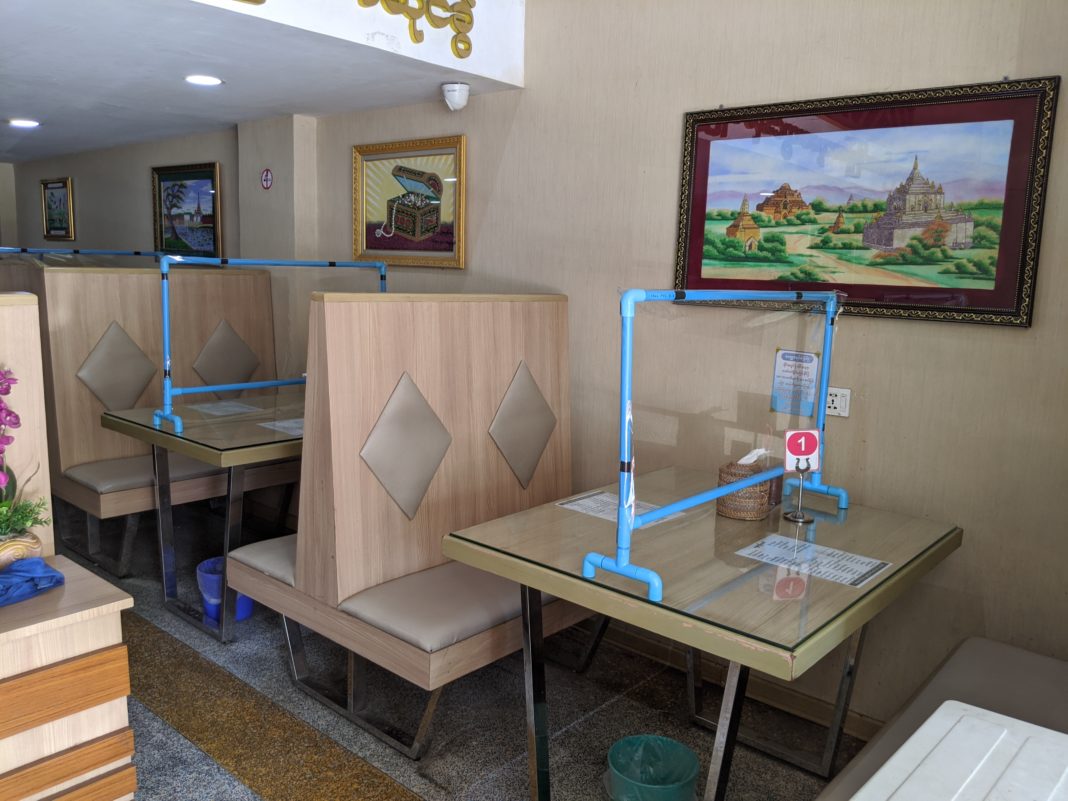 Over the past two months, schools in Myanmar have been closed, bars and restaurants were shut down, and the streets were eerily empty. As the government lifted some restrictions on 14 May, more residents have returned to tea shops, restaurants and bars.

Yangon may not be the same carefree city we are accustomed to, yet as more restrictions are scrapped, the masked faces in the street will hopefully be more relieved than before.

While some supermarkets have extended their opening hours, small shops and wet market have gradually led the way in reopening after lockdown. Wet markets which are fundamental sources of fresh food have commenced operations with vendors wearing masks to protect themselves.

In Myanmar Plaza, one of Yangon’s busiest shopping mall, there are scores of people lounging in public chairs, enjoying free air-con and shopping around, however, the mall is not as crowded and popular as it used to be, as some segments of the market have shifted to online shopping, even for groceries.

As more restaurants and bars reopen, many have started to elevate their hygiene efforts, including temperature check-up at doors, sanitizing hands, mandatory mask-wearing and deep cleans at every table.

In most of the tea shops, owners have set up plastic dividers between or in the middle of tables and some have lowered its capacity rule to ensure a longer social distance between different eaters. The once-lively scenes of men from all walks of life chilling and chatting on stools in tea shops are now changed to solo eating. And of course, almost all waiters and waitresses have been seen wearing personal protective equipment to serve diners.

Some bars in Sanchaung and 47th Street have also reopened last week after a month-long coronavirus shutdown, despite no late-night boozing is allowed.

Going to gym is supposed to be one the healthiest things people can do to themselves. In advance of the re-opening, some gyms have conducted a deep clean, disinfected and wiped down literally everything. Many of the gyms in town have planned to implemented its own phased reopening such as YGN gym branch, Infinity Easy, Balance Fitness, Training Ground, F45 and so on.

Apart from going to gym, there are plenty of places to swim and relax too, without worrying about masks or the social distance rule. Swimming pools in some of the hotels have opened up to non-guests, such as Novotel Yangon Max, Rose Garden Hotel, Parami Hotel and Prestige Residences.

Despite more sports facilities are re-opened, some yoga studios such as Yangon Yoga House and Yankin Yoga Yangon have turned virtual.

Some domestic airlines have already resumed their operations in May, including Air Thanlwin, Myanmar National Airlines, Air KBZ and Golden Myanmar Airlines. But how about the quarantaine? It is still unclear how the different cities act on this.

The vast majority of Yangon’s tourist spots—including the Shwedagon Pagoda, Chinatown and The Secretariat —are open partially. Other landmarks have added mask requirements, temperature checks, and crowd control measures as needed.