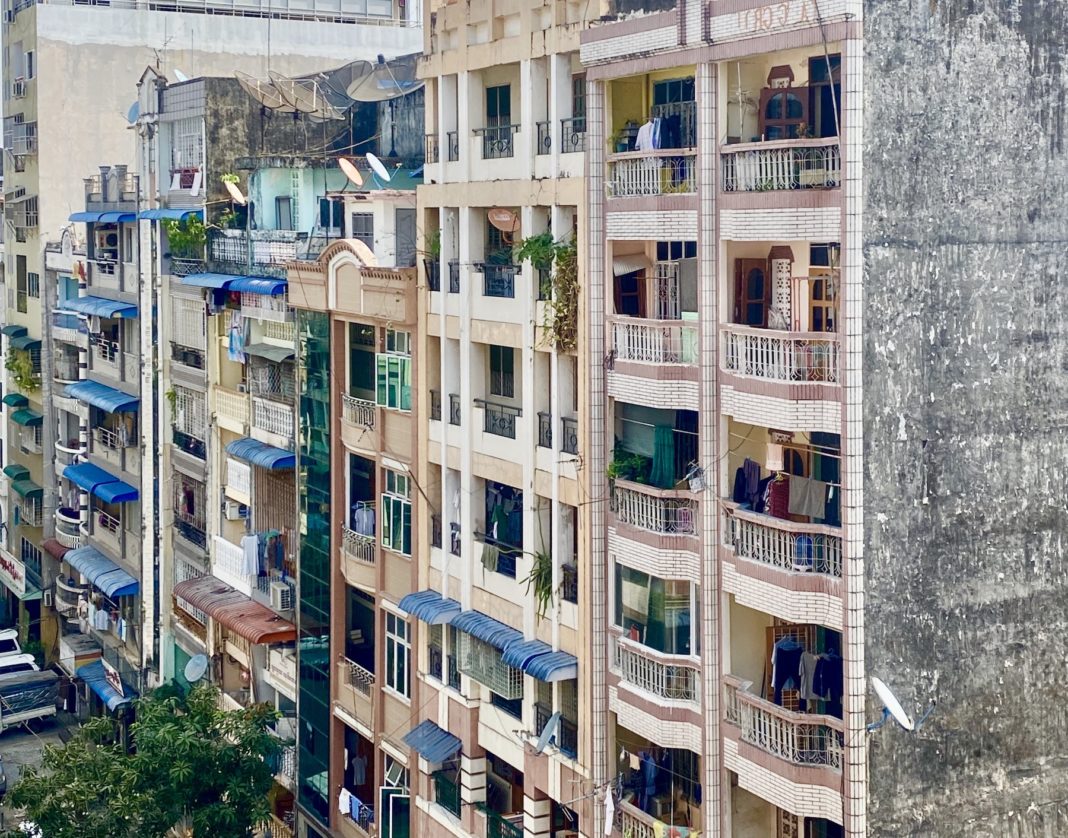 When American Jay Taylor* woke up this morning he was homeless. When renewing his visa, with a two day overstay, the township office told him “don’t worry, just overstay and pay the fine later.”

Relieved he moved into his girlfriend’s apartment, provided by her employer. After three days a staff member reported seeing him, which was against the terms of her lease. The fear for his girlfriend was that she’d be sacked and evicted.

No visa means hotels or hostels can’t legally give him a room.

“It’s a Catch 22. The rules are changing so fast, no one knows which set of rules applies”.

“I know three other people who are couchsurfing. One friend was living in a suburban unit and his neighbours hounded him; ‘you’re responsible for this virus!’. He simply had to leave.”

In the month following Myanmar’s borders shutting, Jim Edmund’s* Visa expired. Everyday the business visa renewal requirements seem to change. He was terrified he’d be refused re-entry if he flew to Bangkok. The idea of being separated from his Burmese girlfriend and business destroyed was too horrific.

In March he went to the Immigration Ward Office asking for an ‘Extension of Visa’ but a Catch 22 emerged. He had no current business visa, nor did he have a Form C.
To get his Form C, he needs to go to court for overstaying his visa and cop a $3 per day up to 90 days, and $5 thereafter.

Within the week he turned up at court but was told proceedings had been adjourned. The system’s overwhelmed with people and visa issues. “I was told ’Don’t worry go home and we’ll send a new court date’”. It’s been silent, there is no date. So he remains illegally in Myanmar.

In this mad world of COVID-19, Luke Daves, Properties In Yangon is warning all foreigners “Get your forms together now!”

All foreign residents are required to hold a current Form C.

Your Landlord must, within 24 hours of signing your lease, apply for a Form C. Everytime you renew your visa, the landlord must renew the Form C.

The paperwork must be filed with the local Ward Administrative Office, then your district Labour and Immigration Office, and also Township Office filing may be needed. When a Form C is renewed, it is stamped with the updated information.

Make 3 sets of papers for each office, which includes:

“Today we have a very different world. The government has realised that it has only a patchy and vague idea where foreigners are living and departments are worried they haven’t been actively following up on Form C’s.” said Moe Lwin.

In 1948, “Form C’s were designed to keep tabs on foreigners. There have been a few amendments to the regulations, but yes, they’re redundant,” said Moe Lwin.

In Moe Lwin’s experience, less than 60% of foreigners have updated their forms with Due Diligence.

Daves, puts the figure at far less. “80% of expats won’t renew after their first Form C is submitted. We work with landlords who either simply don’t know of their legal responsibility or don’t care.”

Why Form C’s Should Be Updated Now!

Although Myanmar is not locked down, no-one can leave or enter, so how can expats renew their visas? Thankfully the Government has altered the rules so short-term visa extensions can be obtained at the Immigration Office, 122 Pansodan Street, Yangon.

Expats on extended visas, six or twelve months must also have a Long-Term Stay Permit & Foreigner Registration Certification (FRC) The Long-Term Stay Permit and FRC applications are made to the Directorate of Investment and Company Administration (DICA) and the Ministry of Immigration at No. 1, Thitsar Road (off Kanbae Road), Yankin Township, Yangon.

E-visa and Embassy renewals outside Myanmar don’t require Form C’s. However, in-country renewals must have a current Form C’s.

Can I do it myself?

Yes you can – but you need to identify your local Ward Administrative Office and district Labour and Immigration Office to obtain the relevant Form C .

Complete 3 copies of the Form C, including your passport number (P.P. No.), business visa number and FRC number (if required). Take the Form C to your landlord and get them to sign.

Submit the form to the Ward Administrative Office/ Township Office/ Labour and Immigration Office relevant to your apartment or house.

There are good Lawyers and Agents around who can help as the process is stressful, confusing and sometimes not worth the effort.

What happens if the Landlord Won’t, complete the Form C, Or Has Gone AWOL?

“Make as many attempts, via email, or text to contact your landlord and if there are any problems go to the Township Office and ask for help. The penalty for landlords can be a tiny fee or 3-5 years in jail. But officers can put the fear of the devil into landlords” said Moe Lwin.

What If My Business Visa Has Run Out

To get a Form C updated you can go to court, and expect a fine. Then you can apply to update your Form C and visa. If you are leaving the country, pay at Immigration.

Demand any new lease include a clause ensuring that the Landlord will organise your Form C’s within a week of you renewing your visa.

Properties In Yangon have designed a lease that balances the rights of Landlords and Tenants.

The Tenants Agent is responsible for the Tenant during the entire tenancy agreement, ensuring that all standards in the contract are met and to support with communication and any difficulties the Tenant may need help with regarding the Landlord or the property.

“Form C’s are a good test of a landlord’s knowledge of the law. When you are negotiating the lease ask for the clause to be included and if they don’t agree, you know something is just not right” said Moe Lwin

P.s. Names are changed inside this article regarding to the safety and personal information.