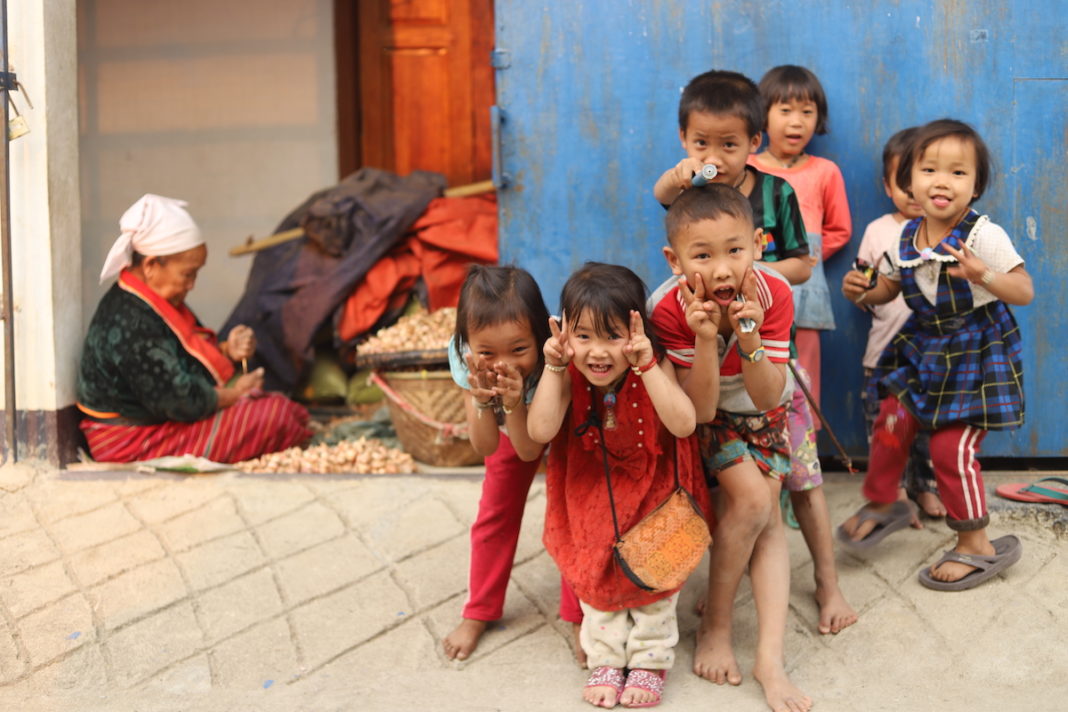 In War-Torn Myanmar, Secluded In The Rugged Mountainous Hills Guide Sai Leads Us To Meet The Villages And Understand the Legends.

In recent years a window of opportunity has opened to trek and meet the extraordinary communities around Kengtung still practicing animism. A spiritual belief system that includes animal sacrificing, and hold ‘flocking’ or fertility festivals that raise the eyebrows of even the most liberal minded travellers.

Through providing medical, financial and social support, Myanmar Shalom Travel and Sai, their guide, have built trust to gain access to stories, and are welcome to sit on any village veranda for a chat and giggle with locals.

A motorbike roars up the steep rocky road shattering the silence. His pillion casually holds a long, incredibly large, front loader gun pointed over his shoulder.

These ancient guns need to be loaded with dynamite for each shot and yet; Ann men are known as magnificent hunters.

As the bike disappears through the wooden houses, a pig groans as it’s being chased away by a grumpy chicken.

The village has a temple with two enormous stone phallic symbols centre-stage. They’re an alter to the spirits that have guided this village since the 9th century in spiritual practice.

Sai sits with the Shaman’s wife on her veranda that’s buzzing with children. “Paternity isn’t an issue here”. Every child is looked after by every grandmother; men teach men, women teach women, children care for whoever.

Everyone looks around, “It’s Mr Shaman”, whispers Sai. His broad muscular shoulders hold the machete that’s tucked away on his belt as he stomps up the stairs to share with the kids a bowl of peanuts, then takes a wooden stool to sit with Sai, this man is a true charmer.

Now in his 60’s the Shaman is the village’s spiritual leader even though the real authority of the village comes from ancestors.

Under the watchful eye of the village the Shaman begins his work as a Medium. The tempo increases as he begins to move from this world into the ancestors. He begins to speak in tongues to receive instructions that the villages will follow to the letter. It may be a chicken, maybe three pigs must die.

Tradition holds that when a Shaman dies the role is switched between two families, moving down the generations.

The afternoon sun reflects off the green tips of the rice paddocks that cover the ground to the far away hills. Behind muddy walls dividing the paddies a hat pops up in the field. Working in her veggie garden is sixty-six-year-old Mae San Sip.

Her gardening clothes are the traditional red dress and two stunning silver belts marking her tribe and an Angel’s child.

As a young girl her mother passed onto her thick silver belts. Worn loosely around her waist from dawn till dusk, in the garden, and during cooking those they’re worn with pride.
The village is a social haven for women separating pungent garlic or weaving colourful bags on the balcony of their wooden homes.

Every house is built on stilts, designed to keep wild animals at bay, so ancient panels have been lost to time.

Sai holds a bunch of garlic chatting, but the women ask him to stay away, they are nervous, does Sai have Covid-19? Even here messages seep through.

Legend states that Angels came to play in the jungle’s shallow lake. Through the woods a Prince out hunting came across the girls wearing nothing but golden laced dresses.

It was a sight directed from heaven; he fell instantly in love.

Expecting a reciprocal response, he stumbled through the water, but the angels ran in horror.

The Prince returned home still determined to make an angel his wife. Every day he prepared a trap of the finest food and a magic rattan ring that he’d throw around an angel’s waist.

While hiding in the bush the angels returned to play.

With a flick he threw the belt high in the air to land on beauty he’d seen just once before. These are their children, the Palaung.

Of Myanmar’s 135 tribes the AKha is the most famous.

Over centuries from the 15th century the AKha migrated originally from Mongolia, through Tibet down the Mekong River valley to Southern China and Myanmar.

The practice of animists delivered harsh justice. Children were not immune from infantilized, particularly those with a disability, or a twin; the child was deemed evil.

For twins, villagers had no idea which one was possessed so both babies were placed under the village gate.

Men and women would spit on the children, stones thrown at the delicate bodies until their life faded.

In the 1800’s Christian missionaries trekked with the British colonial army challenging Animists beliefs and infanticide was cast aside.

Despite the church being influential in many villages, some spiritual practices are still maintained.

When a couple don’t have a son, after three children, they select another wife. While rare, the practice still exists, even under the eyes of the local Priest.

Traditional communal life goes on as before. In homes a great wall separates gender, dividing men and boys, from women and girls.

When a woman needs pampering, she places a stick through the slatted floor where her bed rests, a code for her husband to meet her in the ‘love house’.

Above the fields on the mountain rests the small bamboo Love House where couples meet. There are no walls, just a floor and long thatched roof. It’s here during a quiet moment that couples meet, for fun, for pleasure, for the future.

While the AKha are dominant in the region there are breakaway tribes, in Kengtung it’s the AKhu.

The AKhu women are known for smoking long bamboo pipes and whose garments are black including headdress. In contrast the traditional costume of Akha women wear headdresses of silver metal, with balls framing their face.

Legend has it that greed split the AKha. An elder son worked tirelessly on his parent’s field, while the younger relentlessly demanded an inheritance from his parents far greater than the other.

‘No’ the parent’s insisted each son would receive half. Years went by and his parents grew frail as did the intensity of his demands. In a fury he killed his parents high in the hills, unaware his crime was witnessed.

For justice he was sent away and called in the AKha language, ‘AKhu’ or ‘Dog’ while his brother’s tribe remains Akha.