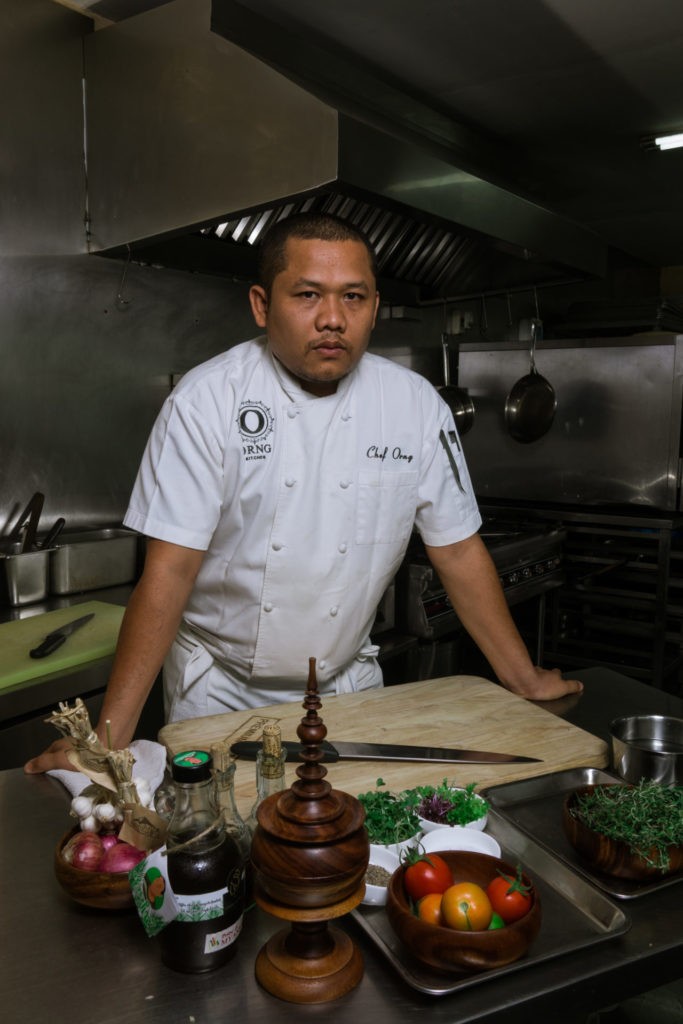 “In the first six months there were countless occasions where we had to cut the loss, we had to call it off, there was no money; there were a few nights a month with zero turnover. We had to sleep in the restaurant. We could not afford the flat.”

The chef looked to his staff, his family, closing up the restaurant.

“A lot of people said, ‘Oh, you are very brave.’ Actually, it was not brave. It was naïve and stupid, and we had no clue about business coming from a kitchen background. You think you can cook food, you are passionate about the food, then you open the restaurant. No. That is wrong. Wrong. We are very fortunate and very lucky.”

Chef Orng introduces his award-winning restaurant, ORNG Kitchen, as a fluke, a bit of lightning caught in a bottle, but when you taste the variety and creativity in his dishes you realize that the man is very humble and a little genius. The restaurant survived in its early days, not because of luck or fortune, but because Chef Orng and his staff dedicated all they had, never compromised on ingredients, and delivered great culinary experiences time after time.

The chef and his team have come far since their rough start in 2017. In February of 2018, Chef Orng won the MYANMORE Chef of the Year, which was a surprise launch into the limelight. “Everyone was coming, jumping on me; I was delayed for like three to four minutes. I couldn’t believe it. My regulars back at the restaurant, they opened champagne for me.”

The restaurant moved just as the industry began to struggle; it was expanding as the economy was shrinking. Chef Orng gives a lot of credit for his survival to winning the Chef of the Year. The rest of the credit goes to his team and his family. “Although they may not agree with me, they have been very supportive throughout. Financially, psychologically, mentally: they’ve been very supportive.

The following year ORNG Kitchen continued to impress and won the 2019 MYANMORE Restaurant of the Year award. “We didn’t expect it. There was a lot happening in 2019. I got married in 2019. I got more business-oriented. There were plans to expand the business. The team had been with me for over two years and I could step back a little bit.”

Success created some breathing room, and the man who worked every day to keep his restaurant going could start looking forward to the future. He began sending his employees out for training and job experience.

“They need to know what is outside their own kitchen. I just wanted to give them the message: ‘your life is not just ORNG Kitchen.’ When I worked for someone before, it was never my intention to work for someone for the rest of my life. I worked there for my future. I said to them, ‘You’re not working here for me. You’re working here for your future. This is a stepping stone. When you find something better, you have to move.”

Chef Orng does more than prepare amazing food; he prepares amazing people. When a hotel needs a cook, he is first with a recommendation. He wants the people who work with him to grow as much as his restaurant and opportunities are growing. He gives everyone a chance and if they take that chance and they give their best, they are family. Chef Orng wants the best for his family.

Looking forward to 2020, Chef Orng has big plans and his team is at the heart of them. New projects invite veteran employees to be shareholders, allowing a level of ownership that allows them to grow. He hopes to prepare the restaurant for five-day weeks, giving staff members more time with their family. He envisions a seasonal daily menu that replaces the set menu; he would like the adventure of adapting to the ingredients available rather than keeping stock. With his changes, he will face challenges, but as he and his team overcome them, they will all prosper together.

Chef Orng might be well known for ORNG Kitchen has his Myanmar inspired French-style cuisine, but he has a lot more going on. He is working with a friend on a Thai restaurant, Lemongrass Thai, which is located off of Min Ye Kyaw Zwa Road downtown. He is also partnering with The Envoy to cook up some delicious comfort food. With three projects in as many years, it is safe to say that Chef Orng wasn’t lucky with his first restaurant in 2017, he dedicated, passionate, and hard-working.

2020 will bring a lot of changes to ORNG Kitchen and the people dedicating their love and energy to the food and service it provides. Foodies will delight in the creativity and mastery of the chef, staff members will enjoy more time with their family and more learning experiences, and Chef Orng will continue to push himself and the boundaries of the restaurant industry in Yangon.