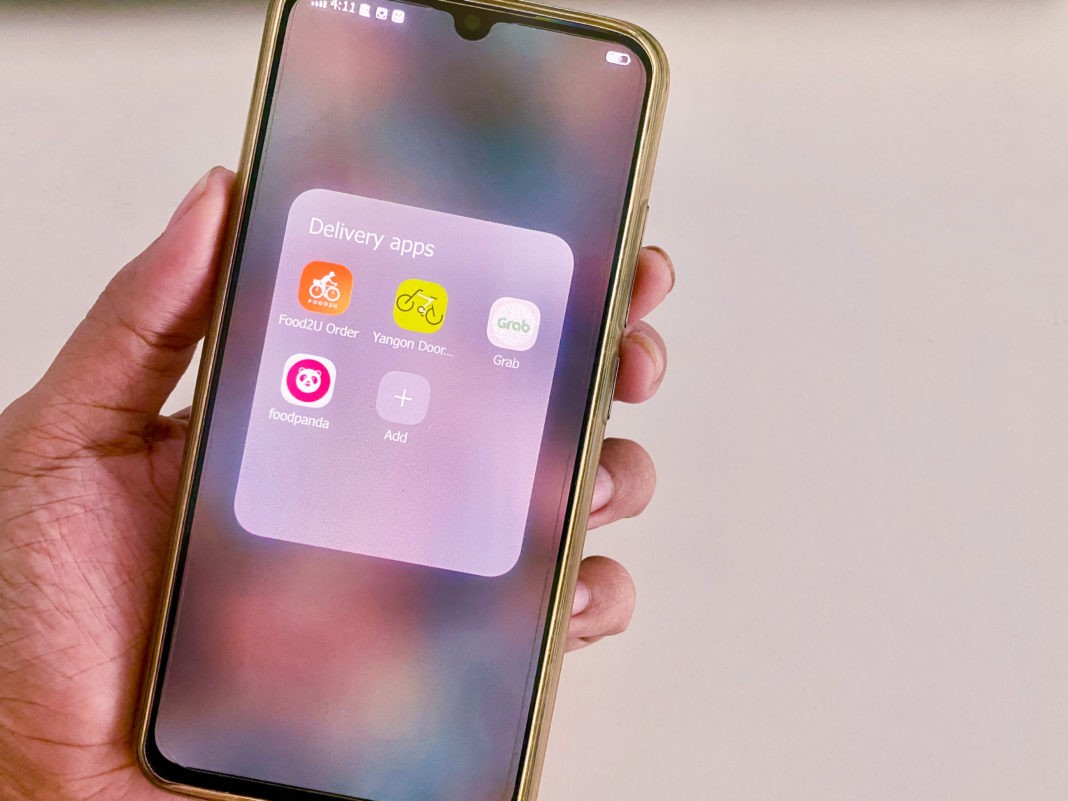 With the coronavirus scare, many people have started to order food online rather than eat out. We tested four food delivery apps to find out how they really work. This is the experience of the Myanmore editorial team on 13 March, the first round testing the apps against each other during lunchtime a working day.

I started with the local derby: Food2U vs Yangon Door2Door.

Food2U – easy enough to use. When I chose the Delivery option, it asked for my address. I used location service but somehow the app could not detect my address. So, I chose the township, which is Botahtaung, manually. Then, the available restaurants appeared. Many items have a description and a photo so you can easily have a glimpse of what you are ordering. You can order from as far as Yankin.

We felt like pizza so checked Pizza Hut. I ordered an Italian Delight pan pizza. My order was picked up by the Junction City branch and the delivery fee was Ks 1,500. It accepts several payment methods including WavePay, KBZPay, OnePay, etc. I opted for cash on delivery.

After filling up my contact number and address, the order was confirmed at 2:28 pm and estimated to arrive at 3:17 pm. Subsequently, the operator called to confirm my order and address. An SMS with the delivery guy’s name and phone number was sent to my phone.

Yangon Door2Door –  You have to put in your township before anything. Its app interface is nice. I ordered the same item from Pizza Hut. When I tried to check out, it said: “This restaurant is not available for the time or address that you have entered.” Puzzled, I tried again and the same message appeared. I gave in. Many things in life need your constant efforts. But ordering food online is not one of them.

The giants: GrabFood vs foodpanda

Grab Food – Grab launched its food delivery service late last year. To my surprise, it did not have any popular pizza places in Yangon. Since pizza is out of option, we went with the comparable fast food, fried chicken.

I ordered two pieces of Peruvian Aji Lime chicken and it was picked up by the KFC Bogyoke branch. The delivery fee was staggering Ks 2,500! You can watch the progress and the biker on the app’s map. The waiting time was 23 minutes and the delivery arrived a minute earlier than the expected time. I asked the biker why the Bogyoke branch picked up my order since the Secretariat branch was closer to my place. The biker replied that it was perhaps there was no delivery guy near The Secretariat. I learnt that he biked all the way from Thaketa to the Bogyoke Road to pick up my order.

foodpanda – The Germany-based service, launched right after GrabFood, is currently giving free delivery and a 20 per cent discount! So, enjoy while it lasts. I ordered the comparing meal from KFC and it was picked up by the KFC Secretariat branch. The delivery time was estimated to be 45 minutes but it took him just 15 minutes!

We were enjoying the fried chicken but the pizza had yet to arrive. I called the Food2U delivery guy at 2:20 pm and he said he was coming from Kyi Myin Daing. Although I should have cancelled the order since it did not arrive at the expected time, I decided to wait a little more. A few minutes and two drumsticks later, my phone was rung by an unknown number. I picked up and it was the Food2U rider saying he was in the building. After talking with him, I learnt that the first delivery guy relayed the order to him who happened to be in Shwe Gon Daing which was closer to Junction City. I appreciated the move but my order came in 23 minutes late.

In the end, Yangon D2D was disqualified as it could not deliver from the same restaurant as Food2U and only mentioned it after the order was placed which was a big disappointment and a waste of time. We will give it another chance in Round 2 with a new set of restaurants.

And the winner is…..with speedy delivery, no delivery fee and a 20 per cent discount foodpanda is a winner in round 1 although their current selection of restaurants is a bit more limited.

The battle is not over yet. The second round will see how each service performs during rush hours and handles long-distance orders. So, stay tuned!

Share your experience and services you use in the comments.