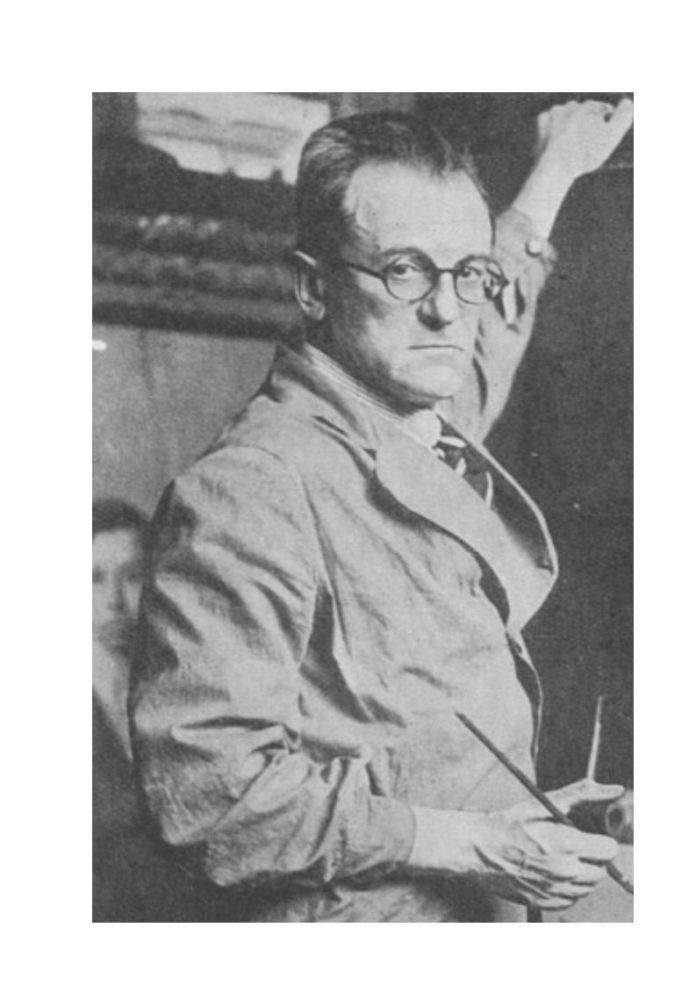 Sir Gerald Festus Kelly (1879-1972) was an Irish painter who became famous for his enchanting and colorful pictures of Burmese dancers and Shan princesses.

Born with a silver spoon in his mouth, Kelly’s father was a vicar and his mother an heiress.

He attended Eton and Cambridge, and then, at the age of twenty-two, departed to study painting in Paris, the centre of the avant-garde.

While in the “City of Light”, Kelly hobnobbed with the best and most cutting-edge French artists of his day, including Rodin, Monet, Renoir, Degas and Cézanne. But Kelly was not a radical, and, to those around him he was an upper middle-class symbol of the establishment.

It was at the insistence of his great friend, the writer W. Somerset Maugham, that Kelly went to Burma in 1908, in the wake of a failed love affair.

Maugham himself would later travel to the country, his recollections of which would be published as The Gentleman in the Parlour (1930).

Kelly was enthralled by the landscapes, traditions and people of Burma. In Rangoon, he was the guest of Daw Mya May (the wife of nationalist U May Oung), a well known socialite and patron of the arts. It was likely in her house that he met the Burmese dancers Ma Si Gyaw and Ma Sein Nu, whom he would later paint.

Kelly’s fame as an artist, however, was cemented by his series of portraits of the Shan Princess Sao Ohn Nyunt.

In 1931, the young woman accompanied her cousin Sao Ohn Kya, the Sawbwa of Hsipaw, to London to attend the Roundtable Conferences on constitutional reform in Burma and India.

Kelly wrote that the princess was homesick for her Shan state, and that, when he encountered her at a reception, she was nearly “bored to tears” by England and its abominable weather.

Enchanted by her beauty, and no doubt reminded of his visit to Burma twenty years before, Kelly asked the princess to sit for him. She agreed, and Kelly made sketches and photographs, from which he would later go on to produce a number of oil paintings.

Even when he was court painter to the Royal Family during WW2, none of his paintings would earn him more acclaim than the 20 portraits of Sao Ohn Nyunt that he would paint over the course of the next 30 years.

Posters of these works would go on to sell more than 50,000 copies and are still available today.

Kelly was able to complete the pictures in London largely through the help of Bilat Pyan Ma Than E, a well known Burmese singer, who posed as a stand-in for Sao Ohn Nyunt.

Apart from his fame as an artist, Kelly (now Sir Kelly for his service to the Queen) was known for his rambunctious personality and his acerbic wit.

When asked why he had painted over 40 portraits of his wife, he once explained: “I paint her because I don’t think anyone has a prettier wife.”

Maugham based a number of characters in his books on Kelly, including Lionel Hillier in Cakes and Ale, Frederick Lawson in Of Human Bondage, and O’Malley in His Excellency.

In them, we see a portrait of a young man with a high opinion of himself and his art, as in the words of Frederick Lawson: “What has nature got to do with it? No one knows what’s in nature and what isn’t! The world sees nature through the eyes of the artist…if we paint grass red and cows blue, it’ll see them red and blue, and, by Heaven, they will be red and blue.”

His straight-talking demeanor landed him a gig as a presenter on British television in the 1950s, placing him amongst other art historical personalities such as the late Sir Kenneth Clarke.

But, unlike Clarke, Kelly was rarely analytical in his praise for a picture. Instead, he preferred laconic statements such as “bloody good painting” or “work of genius” which had the effect of encouraging his audience to get out and view art.

And get out they did. The morning after his first television broadcast, he passed the queue to the Royal Academy from which he had been presenting the night before. It snaked around the block. The taxi driver turned around and said to him: “I reckon you did that”.

At the same time, he could be cantankerous and rude. Born to privilege, he was spoiled by everyone around him – including Lady Kelly. “If anything irritated him, he was like a petulant child,” remembered one BBC producer. “But he was also a brilliant actor.”

Kelly’s misogynistic quips about the physique of women in his paintings belied his work, and his portrayal of Burmese scenes and people could be criticized for their idealized, Orientalist representations of the “Far East”.

Nevertheless, his art has remained popular in modern-day Myanmar (the painting Sao Ohn Nyunt V was purchased by Burmese businessman U Thet Paing Soe in 2011).

Moreover, Kelly’s photo-realistic style meant that he was able to capture a great deal of the humanity of his subjects. His work also serves as a document of the hairstyles and fashion of 1920s Burma.

The late American author Andrew Ranard wrote that “one curious point about Kelly’s Burma work is how strongly his color compositions reflect a “Burmese sense.”

“If the signatures on Kelly’s early Burmese work were hidden, connoisseurs of Burmese painting would still be able to identify the work as Burmese in a flash.”

Whether or not a work by a British artist can rightly be called Burmese, Kelly had a profound influence on later Burmese artists such as U Lun Gywe, creating an entire subgenre of dancer paintings.

In any case, the Irishman was a man who loved life and was clearly aware of his good fortune.

“I really do believe that I am the luckiest man that I have ever known,” Kelly once said in a radio interview. “Things have turned out marvellously well.”