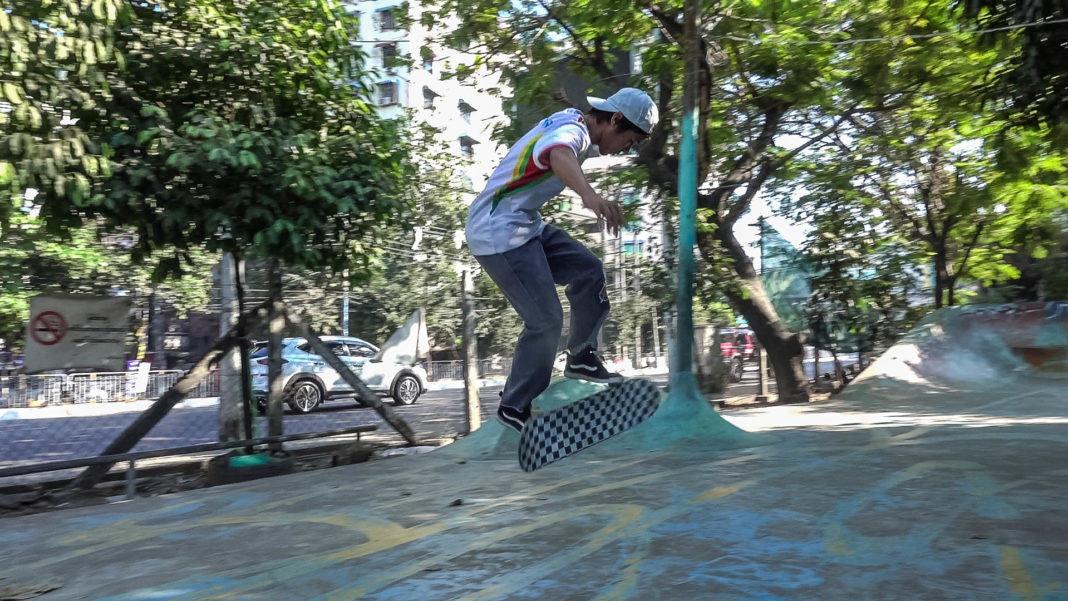 A 10-year-old boy rides down the ramp, jumps and flips his skateboard mid-air. Without success, he falls on the ground. “Go on, son. Try again.  Don’t mind the fall,” cheers Lwin Latt, deputy chairperson of Myanmar Skate Association (MSA), founded in 2013.

With his encouragement, the boy gets back on his feet and tries again to master the trick – the kick-flip.

This is a usual scene at the Mya Lay Yone Skate Park on the Bayint Naung Road where kids learn skateboarding and tricks. Many of them are residents and comers from the neighborhood. But some live as far away as Dala.

“We have street kids at the park. Some of them work at night, sleep here in the morning and practise before their work. We give them food from a monastery not very far from here. Their parents don’t seem to mind as long as they’re fed and protected,” explains Lwin Latt.

Despite its developments and rapid urbanisation, Myanmar is still struggling with child labour issue. According to the 2015 Labour Force Survey Report, over one million children aged 5 to 17 years – or 9.3 per cent of the child population – are engaged in labour.

Pius Peru, one of the best skaters in the country, serves as a trainer for the kids. The 26-year-old participated in the SEA Games alongside four other skaters in the Philippines last December and ranked 12th.

“We need parks with more obstacles to improve our skills. The skate parks here are no longer challenging for us,” he says regarding his experience at the Games.

Pius started skateboarding at 13. There was only Thuwunna Park to practise back then. The MSA has supported training and skate parks in which the youths like Pius can hone their skills.

“When I first learnt how to skate, there was no trainer. I learnt by observing the foreigners who came to the park to skate. They gave us skating enthusiasts skateboarding videos to study,” Pius recalls.

“When the internet becomes faster and widespread, we learn from YouTube. Now, the Myanmar Skateboard Club is training the children here.”

He participated in five overseas tournaments and most recently won one gold and two bronze medals at Rayong Extreme 2019 in Thailand.

Skateboarding is hindered by the lack of quality skate parks. When the government reclaimed the Thuwunna Park, the Yangon City Development Committee gave the skaters the City Centre ground behind Junction City for training. But some people outside the skateboard community had used it for gambling and the authorities closed it as part of their strategy to crack down the gamblers.

“We then practise under the Hledan Flyover since May 2014. This park (Mya Lay Yone) is good. But it’s so small only five skaters practise at the same time and we have 80 to 100 skaters,” says Lwin Latt.

Besides, documentation of the street kid-turn-skaters is also challenging. Many young skaters that are qualified to join the tournaments abroad do not have official documents or national registration cards.

“The registration and documentation of street kids alone has cost us Ks 7.3 million (around US$5,000) between 2013 and 2018,” says Lwin Latt, adding: “The MSA is planning to hold a competition in March when schools are closed for summer holidays. I will make documents for the kids who emerged in top-ten positions.”

Despite its many challenges, the local skateboard scene is blooming like a flower in the rocks. The self-funded MSA sent five skaters to the SEA Games and Htet Myat Naing, one of them, was ranked fourth and Thawdar Shin Thant sixth in the male and female rounds respectively.

Since its inception, the MSA has sent dozens of athletes to over 20 tournaments abroad so far. Only three of them have received the government’s support. The rest was financed by the association’s funds and its leaders, according to Lwin Latt.

“We want the kids to practise full time. But many of them have mouths to feed. So, we also have to let them work. We still can’t expect much from them at the tournaments abroad. As long as they train and stay away from drugs, I’m proud of our work here,” says the deputy chairperson with a smile.

The MSA is slowly morphing into a haven for the underserved – plans to provide the youths on the streets with English language, computer and waste management training are in the pipeline.

As we abridge our conversation to the summa, Lwin Latt and I watch the children skate in silence. Out of the blue, he says: “You know, some of these kids couldn’t even maintain their balance on the skateboard a few months ago. Now they’re jumping ramps and doing tricks. They fall… a lot. But they never quit.”