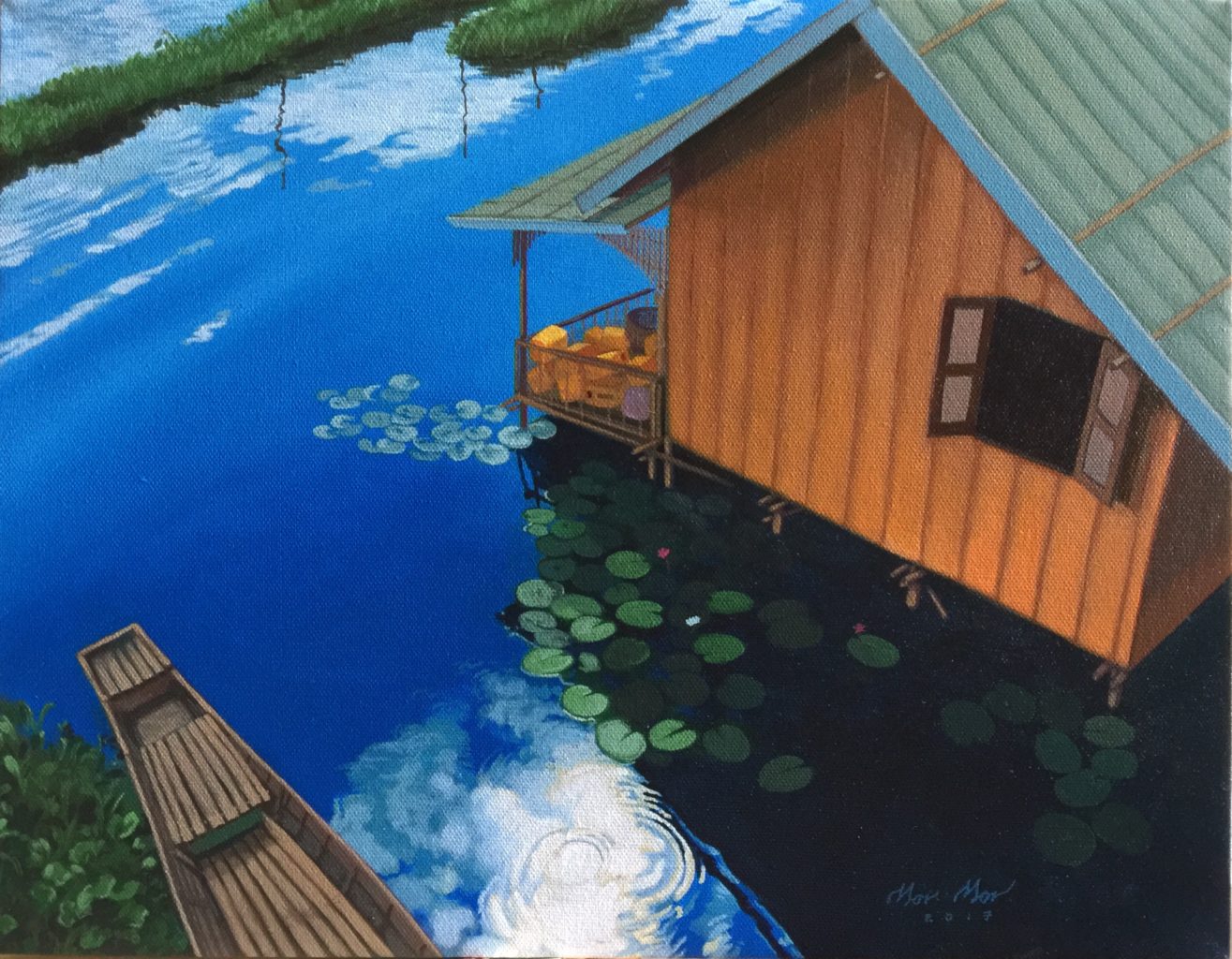 Mor Mor is an Engineering-graduate-turned-artist experimenting with droplets of water after an inspirational revelation. In this issue, Min Pyae Sone sits down with her to chatter what’s got into her mind of artistic career path.

Being a predominantly male community, the Myanmar post-modern art scene had its glass-ceilings. However, it is also hard for any artist – both male and female – to find their own niche. It may be convenient to just paint the repetitive landscapes or the over-used “beauty” of Myanmar.

Mor Mor describes her works as pre-planned and meticulously thought of, but still reliant on her feelings and emotions throughout the entire process, “Like everything should be, in my opinion,” she says.

With her very photorealistic droplets of water, Mor Mor breaks away from the norm of nudes, self-portraits, and landscapes to try and represent the finer details of life – specifically nature. She possesses an array of skills, ranging from meticulously laying out the texture of a single droplet to imitating extremely fine speculations of water, cracks on the wall, and even the human figure.

Her artistic coming-of-age was when she graduated from the State School of Fine Art – while also on track with completing her Bachelor’s Degree in Engineering at Yangon University – this was no easy feat on its own, let alone becoming a successful artist in a country where scrutiny still exists.

Water in all its forms represents purity and tranquility, but in a larger scheme – revolving the painting itself – it possesses the effect of contradiction and the altering of moods along with other representational qualities of a piece. For Mor Mor, the latter can be thought of as her niche; the water itself is unchanging, but in the presence of water, distortions and reflections appear in the things surrounding or it.

The artist describes her epiphany with an anecdote of her past: “I was painting a small still-life piece one day, but as I cleaned my brush and shook off the excess water, I noticed the drops that formed on my backing board. I was transfixed, looking at the different shapes of the droplets, how they altered the look of the wood in the background, and of course, the paths they made as they trickled down the board.”

During our interview, she also expressed her love for values of true Myanmar realism, something that extends beyond pagoda stupas and still-life depictions of fantasy landscapes. After all, she takes her own pictures, which she then uses for her paintings. What needs to be commended is her ability to bring out motion from sources of water, and said ability can be seen in her piece Diamonds 3 – acrylic on canvas – that portrays a novice monk fetching water with a plastic bucket. In the painting, the water is seen rippling across the surface as the novices reach in with the bucket; the shadows and light reflections are also well depicted across the canvas. If the fact that it’s a painting wasn’t known, it would pass for a photograph.

However, in recent years, Mor Mor has shifted to more abstract forms of expression. Finding inspiration in cracked walls and other surfaces, she demonstrates her ability to reach a whole new level of artistic maturity with her semi-abstract series – with her signature water droplets of course. This series was a breakthrough with multiple curators and galleries collecting her work and fetched her the Audience Choice award in the prestigious Sovereign Asian Art Award back in 2008.

Since then, she has been developing her series into one with droplets galore. In her latest addition to the series, the painting September, she correlates two domes of clear water than amplifies the abstract orange background. The droplet on the right trickles down slightly leaving a wet trail, this brings the piece back to “reality” which surprisingly does not hold back Mor Mor in experimenting with abstract subjects.

Throughout the years, Mor Mor has seen little improvement in the growth of contemporary art from the time she started being an artist till now. This is not surprising. As we’re leapfrogging through the times, skipping various movements of art that have shaped other countries’ cultures but have rather not existed in Myanmar, we’re seeing a whole new wave of art that seemingly does not make sense to artists that are still active decades after their debuts. This has stunted the creativity in some of our youth who choose to explore more practical things as opposed to the whimsical ideologies of real contemporary art.

Having said that, I believe Mor Mor’s droplet series is, no doubt, pushing things in the right direction and will continue to do so as time progresses. Some of her works are currently featured at the River Gallery – who also has endorsed our interview and the production of this article.

Mor Mor can be reached at her email address, [email protected], and her Facebook page Painting Artist Mor Mor.