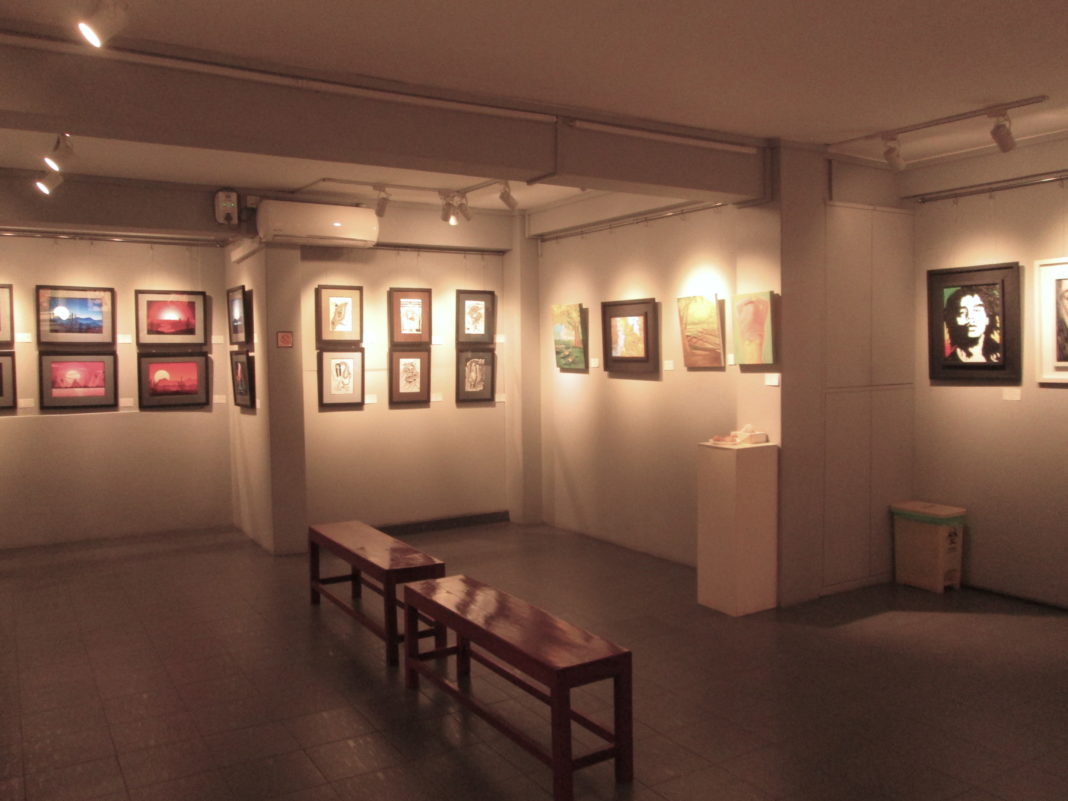 The hospitable 43 Art Gallery hosted “True Image”, the 20th volume of the said show and consists of three young and very talented artists on  14th September 2019.

While the title doesn’t define each and every one of the artists’ themes, it does, however, give us an idea of what it symbolizes: a little sample of each artists’ qualities, which are totally unique. From fantasy landscapes and solitary imagery to psychotic subject matter with little or no context on its own, I was given a real treat both in visuals and appetite – the gallery manager offered me some sandwiches.

First impression-wise, I wasn’t really ‘over the moon’ with the paintings that were set before me. Yet this peculiar pen on paper drawing of a Victorian neighbourhood with the houses lined in perfect composition and the shadows set by the houses adjacent to the main buildings caught my eye. Given that May Su Su Kyi – the artist – is someone who respects proper lines and composition over emotion, we can expect most of her works to be carefully placed accordingly.

In more of her works, such as “Lady’s pose” was something begged to be looked at. The voyeuristic glimpse of a lady undressing makes the viewer feel like a spectator looking in. It is not lewd or lustful in any way, but rather comes off as teasing or tempting. The colour tints used in this painting also suggests an innocence as opposed to a darker alternative which could give you other ideas.

Htoo Htoo, whose paintings had a deep amount of angst and self-questioning, decided to portray his frustrations and confusion by painting a series, with its name inspired by groundbreaking Korean psycho-thriller, “I Saw the Devil.” The paintings are all horrendously detailed and display a great amount of good shadow work which is borderline chiaroscuro. One particular piece, number (18), was a supposed depiction of himself in three stages with the painting’s narration going up vertically. The lower part of the painting or the two dolls marks his childhood – something he defines as nonchalant. As the story (in this case, his life) progresses, we’re introduced to a very weird uncanny character with its tough stretched to form the artist’s teenage episode. I applaud Htoo’s storytelling and concept, as well as his technique to provoke fear, anxiety and sometimes even madness into a visitor’s mind.

This is only a few of the paintings that were showcased in the exhibition which runs until the 18th of September. This is a good chance to check out a few works by the country’s up-and-coming generation of artists. I had a fun time here and look forward to the 21st volume of “True Image.”