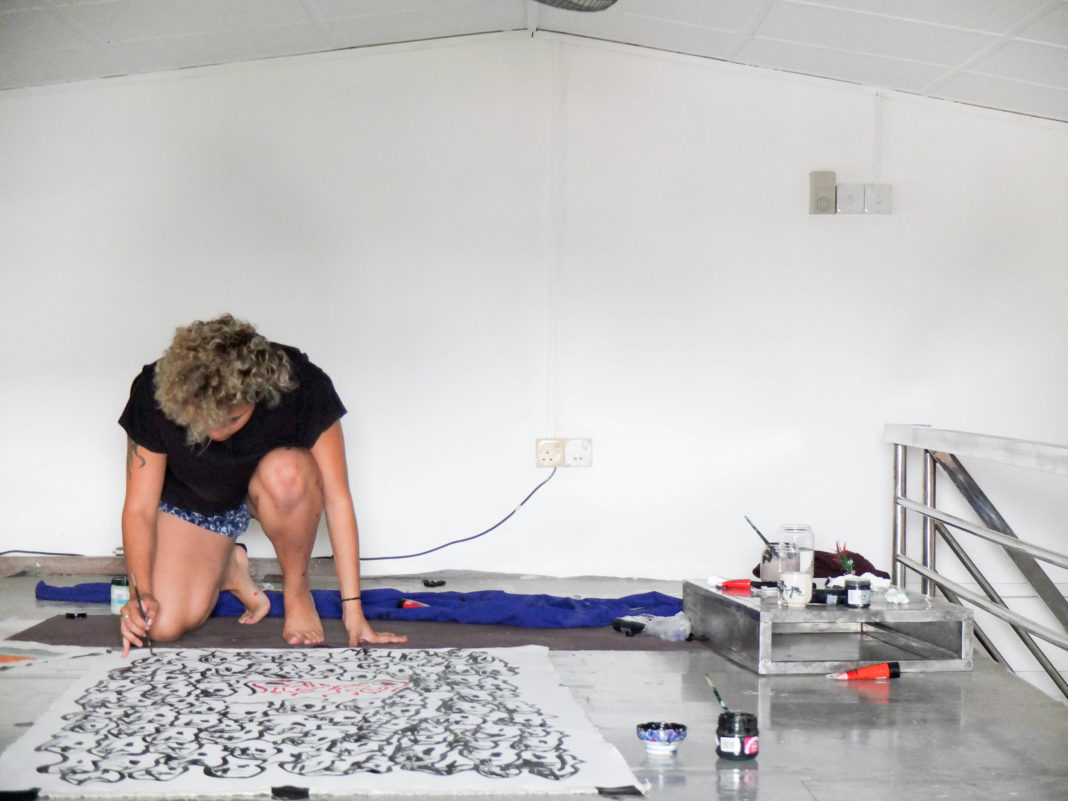 Araya Komai is a non-binary visual artist, assistant manager at Myanm/Art, queer advocate of Fijian and American ethnicity, currently based in Yangon for 11 months. Min Pyae Sone sits down with Araya to discuss their different forms of art and potential contributions to Yangon’s growing contemporary scene.

In society, where the implications of conformity run rampant, we’re encouraged to be different and stray away from the pack. We live in a time where art can be made, interpreted, and perceived by people all color, gender, race or religion. So where does ‘being queer’ and ‘queer art’ fit, especially in Myanmar’s rather backward culture?

For Araya, as someone who operates without a specific guideline, their art is experimental, especially in their cutting-edge videos. Remarkably, these videos may seem meaningless; maybe even primitive. I believe it takes an open mind to understand what they’re really trying to put through the viewer’s mind. Speaking through their work, as if these videos were mediums for a generous, much grander perspective.

During our conversation inside an empty hall, with a few curious passersby staring either at my excessively hairy arms or Araya’s nose ring, Araya elaborated on their childhood and how having a Fijian father and a Caucasian mother pretty much allowed their to experience, and later overcome the prejudice shown towards their and their family. Araya also comments on the beauty standards that exist in Myanmar, most of which are overwhelmingly discriminatory, having spoken about the bias upon people who either are brown or have curly hair.

Their Non-Binary Bodies series portrays solitude and unconditional loneliness. The focal point lands on the subject which is usually surrounded by columns and columns of smiling faces – symbolism among the ignorant. The pattern embedded with the faces communicates a sense of balance, harmony, and contrast. Araya uses thick bold lines to express their feelings towards misogyny and as someone who is the living embodiment of different experiences, they have executed it well. They have also traced their feet, in one of their paintings, to represent a part of their and capture a sense of belonging onto the canvas. The Non-Binary Bodies collection provokes a sense breaking away from a social collective and to question one’s beliefs despite criticism.

“It was me…like I was in this piece. It represents my soul, and then from that, I just created what was around it – which was basically society and a bunch of faces facing one direction. So I would describe my art as pockets of me but not a hundred percent me.”

Araya also partakes in other projects such as experimental photography and videography. The videos are simple, but with a lot of complex thoughts put into it. In their 54 second short, Horizontal Sounds, Araya documents running water, an approaching figure and binaural recordings that stimulates “horizontal movements of mass/elements in both audio and visual contexts,” as mentioned in their video explanation. The video itself imitates and expresses a sense of someone or something moving towards you but at the same time, never reaching its destination.

Araya is also heavily motivated and inspired by their brother, who does music and experimental soundscapes and goes by the name, Sinepainter. He, having introduced music altering software, has steered Araya to start experimenting in videos – which they are very thankful for.

Araya is also open to the idea of assimilating Myanmar elements into their own work in a way that wouldn’t disrespect or butcher the art. With admiration, I can only look forward to their future pieces and see how maturity and experience can shape an artist.