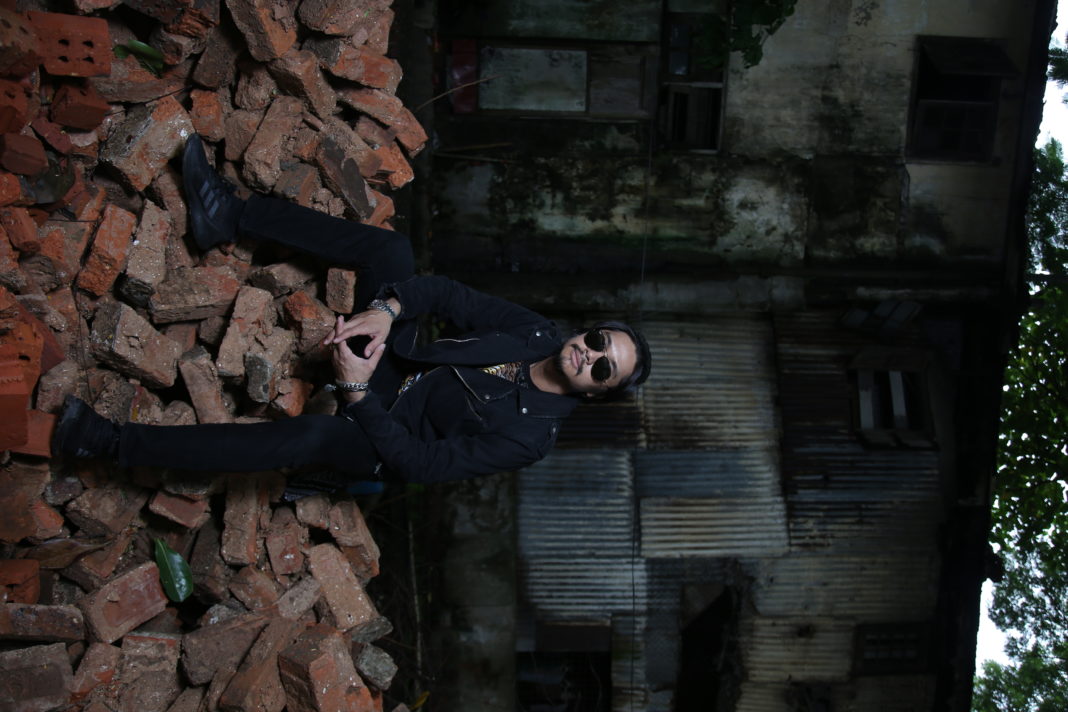 Wearing a black t-shirt encrusted with a colorful sequined tiger, arms covered in sleeve tattoos, and hands bedecked with gold rings and silver bracelets, R Zarni is quiet and demure – a rockstar in the Myanmar tradition. Growing up in Yangon’s Tamwe township, he has had a long journey to the heights of fame and success. Even today, he is one of Myanmar’s most recognizable faces, a symbol of rock and roll in a time when the country was first opened to western culture, and beloved singers across every age and class.

Despite speaking little English, the rockstar is the very picture of friendliness. Softly spoken, he is happy to pose for photos both with us and with the slightly starstruck bar staff at the hotel in which we meet him. R Zarni is accompanied and assisted by his wife Onee, an ex-model who runs The Lace fabric shop, and she often answers questions, prompts him with details and steers the conversation. One gets the sense that their partnership runs deep.

R Zarni didn’t always want to be a singer. It started as little more than a hobby until a series of victories in local competitions made him realize that this could be a viable way of life. At that time, he was singing Bon Jovi, Metallica and Guns N Roses – American bands that were surging in popularity – as the excesses of eighties music excess thrilled Burmese audiences with hints of a world outside of the then isolated Myanmar.

So unsure was R Zarni about his future that at one point he almost became a sailor. He had the papers in order, his registration number and was ready to go, but at the last moment hesitated before stepping onto the boat – a loss for the Burmese tradition of seamanship, but a boon for his many fans.

R Zarni’s extensive catalogue includes both covers of English and Chinese songs, alongside a smorgasbord of original material. For the singer, it is his original music that defines him. He has written an incredible number, finding inspiration through his songwriter friends and extended jam sessions with his band. R Zarni claims that a single jam session can generate two or even three songs, which might go some way to explaining his prolific output and range of styles and materials.

Perhaps the headiest heights for R Zarni were around 2011, and when I ask him about his greatest and most memorable shows, it is this period he refers to. When he played a one-man show in Myanmar’s Thuwunna Stadium in Yangon, the crowd was packed with fans ranging from kids to middle-aged women, and there was no bigger star in Myanmar than this homegrown rockstar. Most of his live performances are highly polished and expertly delivered affairs, his virtuoso voice always on key. Even today, the singer smiles as he tells me that he can still hit the high notes, an impressive feat for a man with his age and vocal range.

R Zarni has certainly mellowed out since his young, rockstar days. Asked what he thinks of the current state of rock and roll in Myanmar, he grows pensive. “Most people have a lot on their minds right now. The old generation and the young generation, both are struggling in many ways. It can be hard to reach out to more people. In that sense, it’s harder than older times. People are struggling with other issues.”

Asked what he is most proud of in his long career, R Zarni points to his loyal fan base, who run the gamut from younger rockers to middle-aged women, where his boyish good looks and singing skills have found an adoring audience.

As he looks to the future, R Zarni sees room for more shows, more music and evolution as an artist. He believes that his prolific nature is key to his success, opening that anyone can find something in his catalogue to connect to – especially on the oldest and most universal topic – romantic love. Whether you are heart-swollen with new love, cut up over a recent breakup, or resigned to a “forever alone” life of cigarettes, instant noodles and warm Bawdar beer, there’s something in his lyrics for you.

A family man, the singer has two sons and is keen to emphasize his hopes for them. If they wish to become singers, he says, he will support them with all the resources he has available. There’s a note in his voice that suggests that he hopes that they will choose a similar path to his own, although when he is asked what advice he would offer the younger generation of aspiring Myanmar musicians, his reply is a little more conservative.

“Young people should know, don’t be too rash. You’re supposed to learn when you’re supposed to learn. Don’t be foolish and give up on your studies. This isn’t like other countries. This is Myanmar. Have something to fall back on.” It’s a surprisingly wise take from a man who is no longer as young as he once was, and a worldly attitude from a rockstar with a reputation for partying.

R Zarni can be a little cagey about some topics. When asked about his biggest fear, he replies with a demure “nothing”, and when asked which band he would most like to play a show with, his answer is a diplomatic “any band.” Die-hard fans of the singer will know that he has dealt with both ups and downs in his life, and an instinctive sense of privacy may be the reason for these careful answers.

R Zarni has also been active outside of his music. Most recently, he hosted Enslaved, an MTV EXIT special focusing on human trafficking, which continues to plague Myanmar and the S.E. Asian diaspora. By connecting real-life stories to his audience, and discussing how young and vulnerable people can help protect themselves and their families from trafficking, the singer is clearly looking to give back to the people who have made him a star.

I ask R Zarni where in his catalogue new fans should start to get into his music, and he wife answers with a quick smile. Easy, with Kabar Thar (Son of the Earth), his newest album.

It’s been a long and winding road for a man who once planned to live out his days as a seaman, but R Zarni’s path has not yet come to an end. Kabar Thar is available now online and in stores across Myanmar.