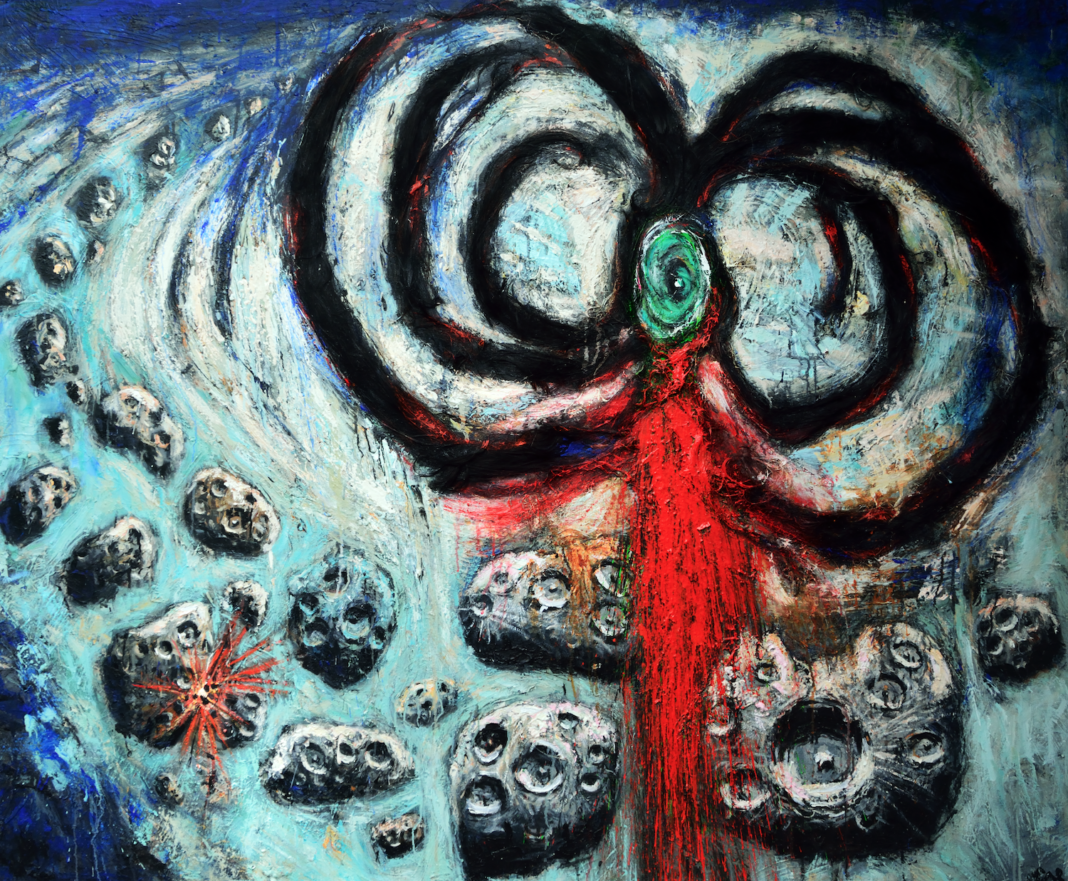 In about 3200 BC, the two earliest civilizations developed in the region where southwest Asia joins northeast Africa. From that point onwards, establishments have existed and many have fallen. This is only one of the many subjects that experimental artist Kaung Su explores with a sense of concealed radicalism. Min Pyae Sone meets him at his studio to talk about his motif and outlook for ‘the bigger picture’.

What Kaung Su calls the ‘Genesis’ of humanity began when human beings started to grow crops. The process of agriculture marks the start and the beginning of growth in civilization. From Mesopotamia to the Roman Empire, every one of these great civilizations began with a settlement in which fertile land and a body of water played a role; but a select few have withstood the test of time. Why? Kaung Su’s latest exhibition explains, questions, and portrays this topic.

“It’s more of a look into both the past and the future; a ‘warning,’ than a statement,” he says, going for the intricate cycle of over-ambitiousness that human beings have utilized over and over again in the past.

The Tower of Babel, may it be myth or reality, was the topic of the discussion. It can sometimes be ambiguous, but it represented the epitome of human over-ambition; in exchange, the people of Babel and their civilization were disbanded.

”My works are containers loaded with depictions of the celestial hierarchy, a history of mankind, and a devastated environment. At the same time, they are tied to distant cosmic history and have multiple meanings. The depth image of the impact crater refers to the fate of humankind and the randomness of evolution. I am trying to recreate a memory of cosmic catastrophe.”

In his mixed-medium (all sorts of materials or mediums) heavy canvases, most of which he implements less oil or acrylic paint, Kaung Su uses animal bones. The reason is understandable; the animal bones that are ground up and smear across huge canvases are to indicate “fossilization.” Everyone will eventually become fossils, and this is how Kaung Su expresses it.

Kaung Su is the first neon light artist in Myanmar and a conceptual artist by nature. His style is very expressive, free, and to be frank, ‘mature.’ In a world where the amount of time for an issue to go viral and become stale is very very short, it isn’t very wise to base your entire motif on it. According to Kaung Su, the maturity of an artist is a key factor in the overall quality of the artist and how they perform.

In his neon light set-up, “Earth’s Pay,” featured in his solo exhibition Infinity Rising, Kaung Su tells us these works are, and his own words: “[a] celebration of our outrageous fortune in existing at all.”

Kaung Su has participated and has been featured in many exhibitions. He has an upcoming exhibition, in September, on the topic discussed in this article. Follow the Myanm/art page on Facebook to stay up-to-date with his latest works.