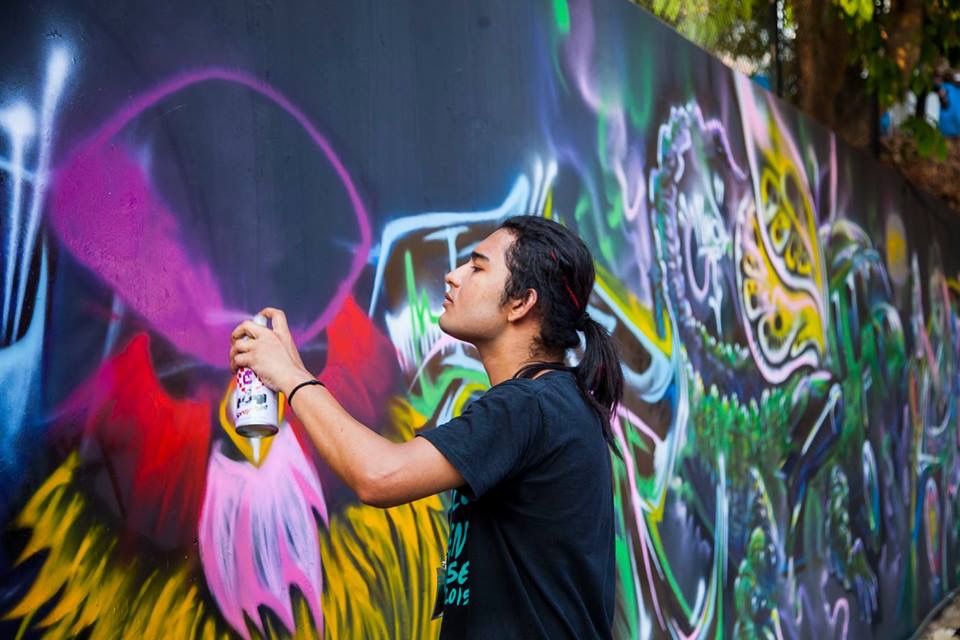 A kindred spirit, and a great guy to talk to; Kyaw Moe Khine or Bart Was Not Here is a Myanmar-born graffiti artist/painter based in a small studio in Mingalar Taung Nyunt. He’s a familiar face via the God Complex exhibit that we’ve featured. In this Q&A, Bart talks about clout chasers and the art industry.

Who are you and what do you do?

I am Kyaw Moe Khine, also known as Bart Was Not Here and I paint wherever I can—either walls, canvas, wood panels… whatever I can get I my hands on.

As a kid, I went to public school, BEHS No.1 Dagon and weekend classes at ILBC, Horizon and even summer classes. Honestly, I felt like I didn’t learn anything. Like, I had to go to tuition after school, and weekend English classes; and in the summer, I had like 3 months of school. It was basically school, school, and school. At first, I kept a drawing book to ‘escape’ while the teacher was teaching. Then slowly, one book became two, and even three. In the end, I had more drawing books than school books. My bag was always packed with Pokemon cards and sketchbooks and that’s how I learned drawing by trying to sketch the Pokemon.

What role does the artist have in society?

I think an artist has no role in society. We can do pretty much whatever we want and people don’t really care about it. So it’s pretty much okay, it’s more based on the fact that we get to do what we want to do. Culture is more important than artists, in society and in general. For a country/society, you should have a culture. That’s how the U.S dominates the world—Globalization.

Should art be funded?

Some art, Yes. Maybe all art. I don’t really care about government funding art, because they’re still a trainwreck. I don’t really have hope in the planned institutions that are to come. What I expect is things from younger people, people who can change the country.

What makes you angry?

Clout chasers. Pretty much social media attention seekers. These days, people can do whatever they want and get attention. People who just live for the clout, they just piss me off. Another thing that pisses me off is when you’re a fan of something—like a comic or artwork and you’re a fan of the artist or the author. The higher-ups, the execs; they have different plans for the product. It’s the same with music, movies and pretty much all of the entertainment we get these days. We love the artists, but the industry changes it and all we get is the diluted, watered-down version.

What do you dislike about your work?

It’s the fact that it ends. Usually, when you start a painting and it’s finished, you feel like, “Okay, I just finished a painting.” I don’t want to end a painting because there is no ending to a piece of art. You can do whatever. If it were up to me, I’d be painting one painting for the rest of my life.

Describe a real-life situation that inspired you.

I don’t think I can recall anything like that, but I remember going to the train tracks. After school, I’d start walking all the way to Thuwanna, or Bayintnaung. Really far places, just looking around and painting. It’s great because there’s no one there and it gives you this state of mind. It’s like the most Buddhist kind of thing — you do something and you’re detached from.

What art do you most identify with?

All kinds of art; comic books, films, and music—especially 90s hip-hop. It’s strange, Frank Stella is super different from your typical expectation of an artist. He’s his own beast, he inspires me the most. Also Jordan Nickel or his other alias POSE, he’s like a big inspiration for me. Mostly these two guys.

Neil Gaiman, you read his stories and they’re like the epitome of what art is—I don’t know why. It just gelled well with me, it reflects everything inside of me. Frank Stella, like I said. Finally, Hieronymous Bosch, I think he’s like the first comic book artist. The story-telling in his panel work, a three-part story: The Garden of Earthly Delights, The Haywain Triptych, and The Last Judgment, is just surreal and it’s very detailed.

My favorite would be this painting [provided in the cover] that I haven’t featured in the God Complex exhibit. It says “Show You How To Move in a Room Full of Vultures.” It’s a line from Jay-Z. It’s like the best painting I’ve ever done. Even though the sketch wasn’t that pleasing, the tiger, the shark, and all the other elements; as they came together—full-fledged.