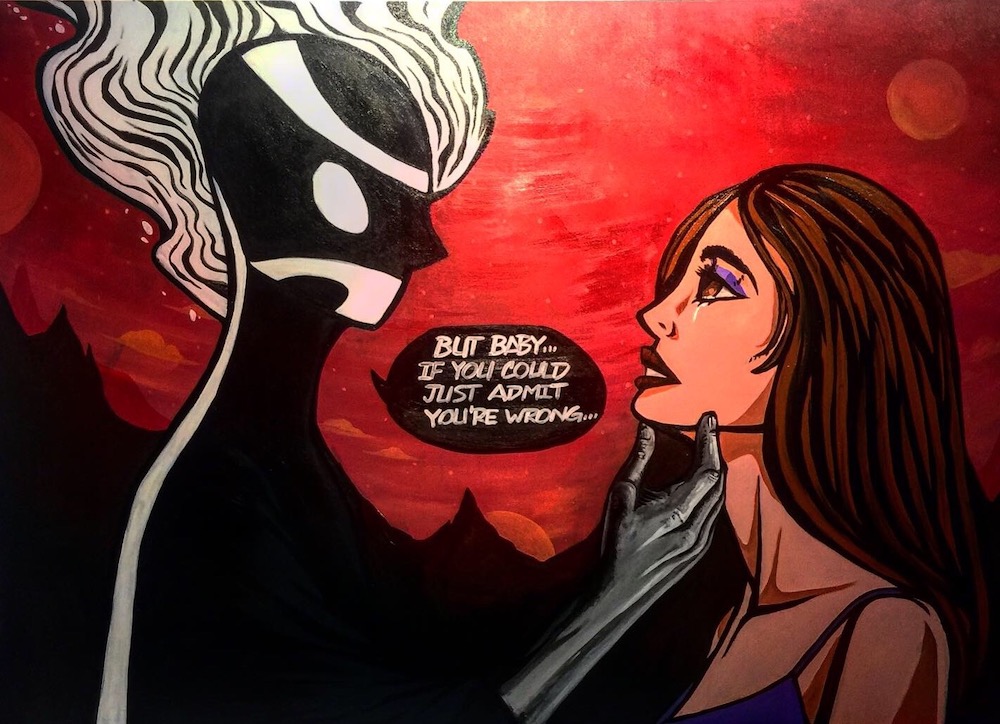 Bart Was Not Here—or there; when I checked out his solo exhibition at the Myanm/art gallery. Oddly named God Complex, many would find it improper since we are living in a country where any unconventional ideas around God are deemed disrespectful. That was not the case. It’s hard to keep saying Bart Was Not Here, so I’ll just call him Bart. Although he clearly states his inspiration from Lichtenstein, Bosch, and Gaiman—especially his work on The Sandman series—it was also apparent that in most of his works, a Dali-esque background (the one with the elephants walking on sticks).

On a large board, his motives are explained: “The main character is the artist’s take on a Jinn (Djinn) from Islamic Mythology with a twist of pop culture influences.” His reiteration of Lichtenstein’s famous works, such as “In the Car” and “Crying Girl,” Adam and Eve is to be praised as it contains a relatable message along with a hypnotic backdrop. His influences via the Pop Surrealist movement and his love for the art of spray paint graffiti blends in well with the message to deliver. God Complex is as Wikipedia defines it: “[The] unshakable belief characterized by consistently inflated feelings of personal ability.”

Whereas we may not have had the chance to interview him, it was loud and clear that his art revolves around this character that seems to be stuck in limbo where he spends his days surrounded by theme parks, architectural ruins, and sometimes gardens. Among patches of zebra patterns—some in orange, stuck in the middle of a hundred dollar bill is his character and written are the words: “In God Complex We Trust.” Most importantly, the highlight of the show was his piece Play with Power! — something that really spoke to me, mostly because of the subtitle Other Toys Are Boring…

However, Bart hasn’t always been painting Djinns and pretty landscapes. His older works, while still having the signature graffiti lettering and purple/maroon combo—which he pulls off effortlessly, were mostly satirical, politically incorrect, and most of all, funny. He isn’t going anywhere anytime soon, a talented artist; check out his art via his social media via Facebook and Instagram.

Check out the event information below;

BEHIND THE CURTAIN: Htet Htet Aung of LADY Hand Made Products