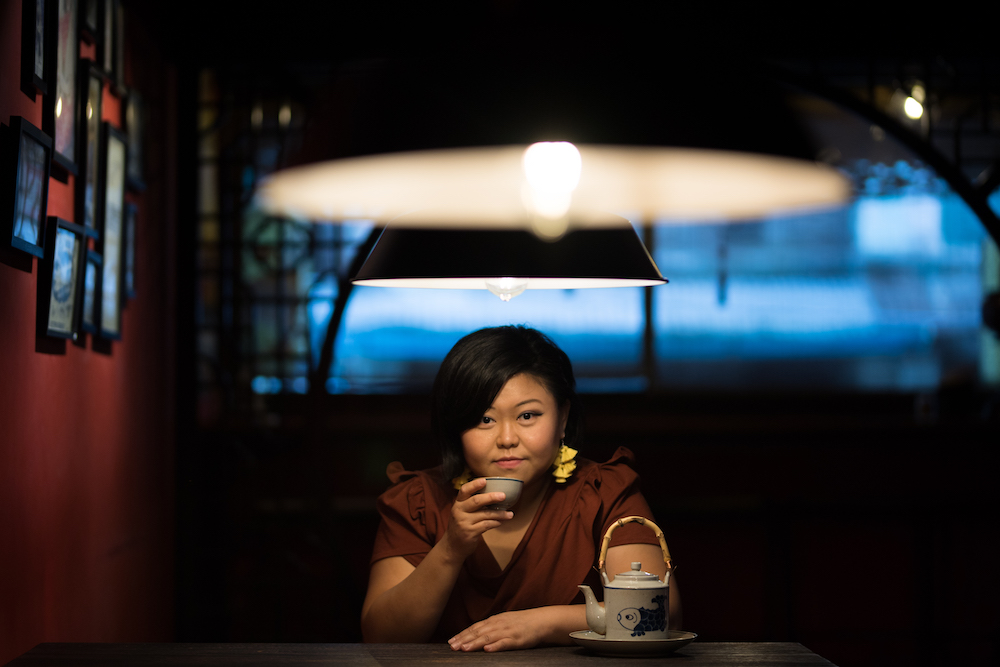 From finding her name listed in Forbes 30 Under 30: 2019 for Art & Style to shining a light on gender issues in her serpentine sculptures, ceramic artist Soe Yu Nwe is a force to be reckoned with. Here she discusses exploring her Chinese heritage, finding inspiration in everything from the natural to the divine, and searching for mushrooms in Chinatown. Words by Issy D’Arcy Clark. Photography by Shwe Paw Mya Tin.

In the streets of Chinatown, strings of red and gold lanterns create a canopy overhead, while small shops selling decorations for Chinese New Year spill out onto the street; a tangle of gaudy banners, stacks of red envelopes and boxes of golden pig ornaments, stuffed with jellied sweets. The preparations for the new era, welcoming in the Year of the Pig on February 5th 2019, have electrified Yangon’s “Little China”, found between Shwedaungtan Street and Shwedagon Pagoda.

I am here to meet the ceramic artist Soe Yu Nwe who is freshly buzzing from finding herself listed in Forbes 30 Under 30: 2019 for Art & Style, as well as the success of her recent solo show ‘Serpentine’ at Myanm/art, which proved so popular it was extended by 10 days.

As we walk through this vibrant area that speaks volumes about Myanmar’s multicultural history, she tells me that Chinatown has significance for her family too. “My mum and I come here when we need to buy special ingredients for Chinese dishes, like wood ear mushrooms,” she tells me. “And also things for ancestral worship.”

As a third-generation Chinese immigrant, Soe Yu Nwe has not always been so at ease with her heritage. While at school she was painfully aware of her difference to the other children as a result of being ethnic Chinese. Though times may be slowly changing, she tells me she grew up sensing distrust and misunderstanding among different ethnic groups and her childhood experience was tinged with the feeling of alienation. “I noticed that the language that I spoke at home was different from school and I remember not understanding what people are saying,” she says. “That sort of barrier, that distance and confusion, is something I try to explore in my work. I’m interested in intimacy and the complexity of individual identity.”

It’s obvious that since embarking on her journey of self-discovery through her work, Soe Yu Nwe has begun to find her voice. Though during the photo-shoot at Chinatown 125 Café Soe Yu Nwe is a little shy, relying on her sister, Kyi Zar Thein, to give her direction, when it comes to speaking about her work and inspiration, Soe Yu Nwe transforms. She is eloquent, almost to the point of being poetic, and has a quietly burning focus on the ideas that echo in her work.

At the ‘Serpentine’ exhibition in Myanm/art, four huge ceramic snakes, one gold, one silver, one brightly pearlescent and one multi-hued, adorned the walls. The snakes are a precursory representation of the Burmese dragon queen, Naga Mae Daw who is described in Buddha’s birth stories. Soe Yu Nwe developed her fascination with the creatures while casting around for an animal to use as a self-symbol and she started to explore her Chinese identity – and the fact that she was born in the Year of the Snake.

“Snakes have very contradictory connotations. In a lot of cultures, they are a symbol of evil, but in Burmese spirituality, snakes sometimes take on the meaning of guardianship. They’re powerful and strong, but
they use their strength and power for good purpose,” she explains. “In my new series, I am exploring the Naga Mae Daw, an underworld guardian. Even though ‘naga’ means ‘dragon’ in Burmese, it actually means ‘snake’ in Sanskrit. I’m interested the root of this transfiguration from snake to dragon.”

In addition to having a spiritual implication for Soe Yu Nwe, the snake as a symbol also has an additional, equally double-edged, nuance to it. “Snakes are associated with a dangerous sense of femininity, like a femme fatale who can lure men into doing bad things, but then it’s also a masculine symbol as it’s phallic- shaped,” she tells me. “It’s a very loaded symbol and I think that’s a very interesting starting point, especially to talk about gender issues.”

In Soe Yu Nwe’s hands, the representation of the Naga Mae Daw is fragmented, often wounded; with sections of her body burst open to expose bodily tissue or scales, but also delicate flowers, glass leaves and golden buds.

“It’s the wound of being female in a society that tells you that you’re inferior,” she explains. “In Burmese society, women are thought of as being born with less ‘hpone’ than men. This essence gives all men a spiritual power and places them on higher spiritual ground, allowing them to reach enlightenment. To reach enlightenment as a woman, you need to be reincarnated into a man’s body. This thought deeply wounded me – the thought that I am born less, spiritually tainted and will never be what a man can be.”

As well a being a comment on the state of womanhood, I wonder if this interplay between the exterior and the interior, the serene smooth surface breaking at the wound to reveal turmoil and injury beneath, is also a metaphor for Myanmar society. To this, Soe Yu Nwe gives me a tight-lipped smile. “I think it’s a very interesting read,” she says kindly. “I leave my work open to how people interpret it and I’m sure as an artist who has lived here, I’m influenced by the undercurrents of the politics and the socio-economy of this place.”

When considering the delicate flowers, the sculpted hands and feet, the exposed sinews in snake flesh, it may be unsurprising to learn that Soe Yu Nwe originally wanted to study Biology to become a pharmacist. While at school she had never had an art class, but had a particular interest in the anatomical drawings she studied in science at school in Yangon. After being accepted into Albion College in the USA to study Biology, she soon decided on a drastically different course and changed her major to Bachelor of Fine Arts.

This interaction between the natural world and the spiritual is another omnipresent theme within Soe Yu Nwe’s work, a link that was solidified during her upbringing when her parents anointed a tree in her grandmother’s garden to be her godmother. “This idea of having something in nature, non-human, as your mother and also given a spiritual meaning interested me. It means they connect with you, interact with you and have a relationship with you,” she explains.

Nathalie Johnston, the founder and director of Myanm/art, was also drawn to Soe Yu Nwe’s work for it’s spiritual themes. “Her examination of spiritual practices is relevant for Myanmar society, where Buddhism reigns as a lifestyle, as much as a religion or philosophy,” says Johnston. “She looks at the symbols and rituals and helps reimagine them in physical form.”

But as well as the spirituality, Johnston also admired the medium in which Soe Yu Nwe expresses herself. Speaking of her decision to show her work at Myanm/art, Johnston says; “The fact that she practices ceramic and glass, both incredibly difficult mediums that require well equipped studios and good quality material, neither of which you can attain in Myanmar, was probably the thing that made me think that the art community in Yangon need to see her work.”

But though her work is unique, I can’t help but ask if sometimes, when she’s packing up her fragile pieces for the next exhibition on some far-flung corner of the world, she ever just wishes she had chosen flat-pack- friendly canvas instead? “Every time!” she laughs. “Especially when they break.”

But over the years Soe Yu Nwe has learnt the tricks of the trade to make her work mobile, using pillow stuffing to fill the negative spaces in her sculptures and creating pieces that can be dismantled. These steps have been necessary as she has a connection to ceramics and glass that goes deeper than the aesthetic.

“When I was in the US, I felt depressed and lonely, alienated from my surrounding,” Soe Yu Nwe remembers. “Working with clay was good because it brings a kind of intimacy. By touching the clay and feeling what’s in my hand, it bridges a gap in my own psychology. You don’t feel the same distance compared to working with a paintbrush.”

In the future Soe Yu Nwe has an ambition to move more into glass blowing, with a vision to create a huge glass chandelier that will descend from the ceiling into a big installation of sculptures of animal-human- hybrids below – and perhaps even an ogress.

After seeing the sculpture of the ogress Sanda Muhki on Mandalay Hill, Soe Yu Nwe was inspired by the story behind this female figure, who cut off her breast to give to Buddha as a gesture of devotion. Though Buddah refused the ogress’s offering, he predicted that she would be re-born as a king who would rule the country and myth has it that King Mindon Min was the reincarnation of Sanda Muhki. From the open wound to the conflation of the male and female, it’s easy to see why this story means so much to Soe Yu Nwe.

2019 is sure to be a busy one for this artist on the rise. Bolstered by her fantastic achievement of being listed in Forbes 30 Under 30, Soe Yu Nwe is helping to further the recognition of artwork from this forgotten corner of the world by curating an exhibition of Southeast Asian contemporary ceramics for Pottery Northwest, Seattle in May. In addition she is also planning two residencies, one in Australia and the other in Cambodia. But despite the accolades and ambitions, the hype and the hopes, while the residents of Chinatown prepare for the Year of the Pig, Soe Yu Nwe remains ardently focuse on the new era that’s dawning for her: the Year of the Ogress.