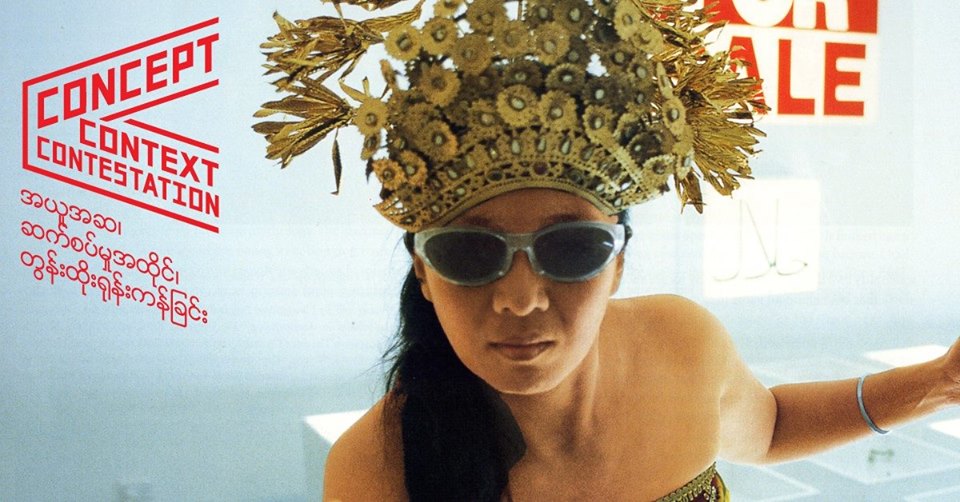 A heap of bright pink guns made from crackers, the charred remains of a rural home, rows of multi-coloured passports strung up like bunting, the curious and thought-provoking exhibition “Concept Context Contestation” at the Secretariat opened on January 19th and will conclude on February 10th.

Featuring the work from 41 artists from Southeast Asia and Myanmar, the exhibition explores themes of injustice and power while commenting on social and political issues from each of the countries represented. In one room, a durational performance piece titled “The Intruders” shows an outlined map of Myanmar drawn in rice, created by well-known artist Aung Myint. Within the map, garish plastic dolls and cars mark Yangon, while toy trucks loaded with wood, papier-mâché cows and gems stones rush across cross the boarder into China. Elsewhere, the works of Thai artist Manit Sriwanichpoom depict his series “Horror in Pink”. Smiling and serene, often pushing a shopping trolley, the character of the Pink Man, a symbol of consumerism and passivity, has been placed in the crowds of horrific historic photographs. Standing in shocking pink against a monochrome crowd, he genially observes a man being beaten by armed police and stands by while the body of a hung man is abused.

As the exhibition shows, in countries where free speech and open criticism of the government are prohibited, conceptual art has become a coded weapon, revealing unspoken truths.The topics explored in the exhibition are made all the more poignant in the setting of the Secretariat, which was former centre of British colonial power, before using the first Parliament of independent Myanmar and the site where Aung San was assassinated in 1947.

Concept Context Contestation was originally commissioned by Bangkok Art and Culture Centre and was first shown in Thailand in 2013. The concept then moved to Hanoi and Java, before opening in its final incarnation in the Secretariat. Conceptualised with the help of the Goethe-Institut, the exhibition features the works of 10 Myanmar artists.

Pamper Yourself in July with These Upcoming Events & Promotions