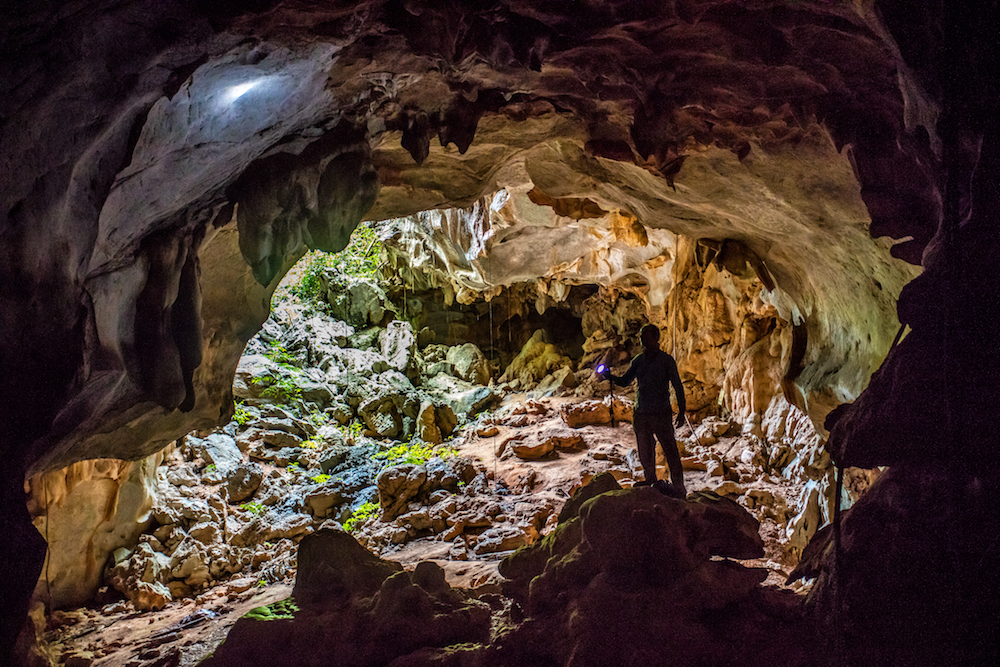 On a recent destination scouting trip in southern Myanmar, two things were unclear: the location of the un-named cave, and even how long it would take.

I’d been led to believe it involved just a short boat trip from an Andaman Sea coastal town bordering the Gulf of Martaban, with a few steps into the cave. I thought that in less than an hour or so, myself, travel veteran Bjorn Burchard, and remote place photographer David Van Driessche would be back in the air-con comforts of the Toyota Alphard, having—how I dislike that phrase—‘ticked that off our bucket-list’ on our busman’s holiday from Kawthaung north to Yangon.

So when we finally finished the excursion, we had every reason to be disgruntled. My hiking trousers were torn, one gaping, irreparable rip from the crotch down to my ankle. My hands were scratched from the unforgiving rock, and I had a nasty splinter still embedded in my foot. I was dehydrated, starving and fatigued. I had not signed up for this.

Did I complain? Nope. Was I a happy camper? Yep. How come? I’d just explored a cave that is so unknown, that even though many karst systems around Hpa-An and Mawlamyine had been documented since 1827, nearby residents don’t even know about its existence. As far as we know, we were the first foreigners to go inside.

The day started with an uncomfortable journey in a leaky longtail boat ride. Wearing peasant bamboo coolie hats, and SPF 30+ ‘white man’s thanka,’ we sweated in the May heat, squinting at the water’s glare. I went into a Zen-like doze-meditation state, trying to rise above the excruciating pain in my hips.

I imagined I was traveling with Huckleberry Finn down the Mississippi River, but, instead the ‘Duelling Banjo’ theme music from Deliverance played in my head. As we motored up the meandering olive-green river, the beguiling landscape won me over, and the soundtrack switched to the slow dirge Be Still, My Soul. Instead of worrying about what lay ahead, I focused on the river flat topography, beyond rice, cane and corn fields rugged jungled limestone hills rose, some—if you squinted and cocked your head to one side—looked like reclining ladies, or the profiles of bearded poets exhaling clouds into the arching blue sky. The occasional fisherman on wooden skiffs attending to fishing nets, and woven lattice traps, were the only inhabitants seen.

After what seemed like hours, we landed, and walked through fallow fields to a towering limestone cliff-face, where swallows gracefully looped around preparing their sought-after nests, and giant butterflies flitted this way and that, a ballet of ADHD.

We skirted around the massive karst outcrop, ducking under smooth water-sculptured limestone where black-stem lianas and dimpled chalky white stone were intertwined. “During the rainy season,” said the guide, gesturing with a sweep of his hand, “all this is underwater.” The previous week, torrential rain had flooded some caves.

With a machete, one of the youngsters at the front hacked clear sharp grass and springy spiked vines, until we reached a narrow, steep, slippery drop into darkness.

Our inadequate supply of headlamps and torches scanned the interior, unable to illuminate the extent of the cave, but unsettling enough to disturb the hundreds of bats hanging upside down high above us, their eyes glowing angrily, the flap of wings beating the still, stagnant air of the cave. As we watched the flustered silhouettes and the menacing shadows on the distant walls, I felt a bat fly past my head, and let out a short “Aagh” which echoed further into the cave.

After walking over rounded, eroded dripstone mounds, we found more columns formed from ceiling stalactites joining floor stalagmites, and even delicate frozen draperies of calcium deposits, crystallised and moist, some hollow and one forming a natural xylophone—but we were careful just to look and not to touch.

The cave twisted and turned, and as I swivelled around to look back on where we have been, one formation seemed like a crouching tiger. I went to mention this to my fellow spelunkers, but they had already disappeared into another chamber, leaving me with the bats.

It was hard to get a sense of the scale of the labyrinth, as we entered open areas where the ceiling had collapsed, and climbed out of potholes, scrambling over rough, uneven rocks to enter new tunnels with river silt linings and the acrid smell of bat guano.

Our flashlights illuminated side caves, and thin fissures where perhaps Harry Houdini could squeeze through. At one cave junction, we came across a surprise—a nat icon and a discarded net—probably from bat catchers, speculated our guide.

Close by, two snakes coiled around each other, but on closer inspection, it was just one very long snake. “Pretty harmless,” was the verdict of the assembled Burmese.

In the next chamber we encountered a trouser-snake, the tall penis-like stalactite, a ‘phallactite,’ and further on natural arches and middens of spiral shells beneath our feet, which one day, will be reduced to limestone to start the cycle again: testament to the truth that given water—and time—anything solid can change.

You can visit the cave, but only with a guide, on a planned trip, with Moby Dick Tours (myanmartravel.cc), outside of the rainy season—you need to be fit and agile, and have an adventurous spirit.

Keith Lyons (keithlyons.net ) is a New Zealand travel writer with a decade-long obsession with Myanmar. He edited and co-authored ‘Opening Up Hidden Burma’, and is currently working on a coffee table book and travel guide for Mergui archipelago ‘The Last Untouched Paradise’ with photographer David Van Driessche. (davidvandriessche.com)