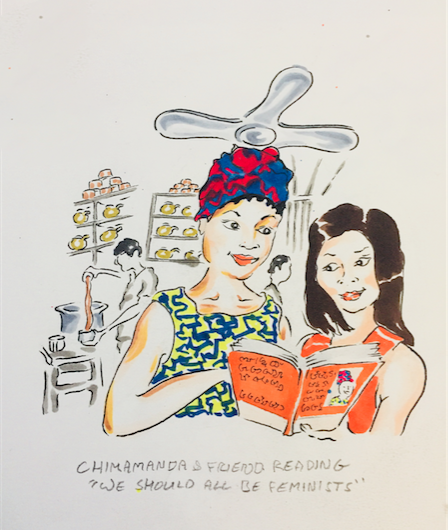 LGBT Film Festival is back!

&Proud returned to Mandalay March 2-3 with its LGBT film festival. In addition to movie screenings, the free festival included panel discussions, games and more. The event was held at the Jefferson Centre, the US Embassy’s outreach hub named after the third President who, ironically, tried to introduce an anti-samesex marriage bill during his tenure.

Mandalay Moat gets a much-needed makeover

MCDC started repairing the sidewalk and fences along the southern stretch of Mandalay’s moat. New steel railings will not only be an aesthetic improvement but will also help block fishermen from illegally catching the moat’s aquatic residents (and keep drunk Thingyan revelers from going for a swim) and the smooth sidewalks will prevent joggers from twisted ankles. However when the other three-quarters of the moat will be renovated is anyone’s guess.

Myitkyina on the high rise

The Kachin State capital Myitkyina is growing like mushrooms in a cow pasture. Some of the most notable changes over the past two years include an influx in large hotels—from only a handful of main venues like The Madira and The Palms Resort to an abundance of choice, such as Myit Sone hotel with it’s gaudy horizontal, gold colored stripes of lights and it’s name in tacky 10 foot tall, red Chinese characters. Also a supersized, full on golf resort has broken ground north of town. “We already have two courses in this little city,” said one resident. “Who are these things being built for?”

Speaking of Myitkyina, one of its most famous sons Aung La ‘The Burmese Python’ N Sang made history at the end of February when he knocked out Brazil’s Alexandre Machado in Yangon to become the ONE Championship Light Heavyweight Champion. The fighter already held the middleweight belt and in the post-match interview exclaimed, ““One thing is for sure: Myanmar, when we are united, nothing can stop us… If we are united and we are together, we can do anything!”

Chimamanda Ngozi Adichie’s book-length essay We Should All Be Feminists was met with international praise and spent months on the New York Times bestseller list on its release in 2014. In fact, the following year Sweden’s government announced that a copy would be distributed to every 16-year-old high school student. Then, in September 2017, 500 copies of a Myanmar translation by Nandar were published with the help of Mote Oo Education. With another 1,000 copies published in December, the book’s message of embracing the term ‘feminism’ has resonated in the country.

A young me once asked

To grow up to be

Not knowing it had nothing to do with looks.

They told me I should aspire

To be a woman so beautiful,

And desirable by men,

A woman who makes no fuss,

And complies with orders,

So that I am easily ordered,

A women who is deemed a strong suitor

To tend to domestic affairs,

Who can satisfy a counterpart,

Much stronger than she

To motivate the breadwinner

To go out and get bread,

While she cooks and cleans and waits,

A strong women is not an aesthetic,

By any socially-constructed means

A strong woman is not beautiful or attractive,

As men want her to be.

Beauty is not about the shape of your nose,

Or the color of your eyes,

Beauty is about who you are inside,

Beauty is about defiance,

And standing up for yourself.

Who tell them how or what to be.

Strong women are women who work,

Who know what it really means

To be confident and beautiful.