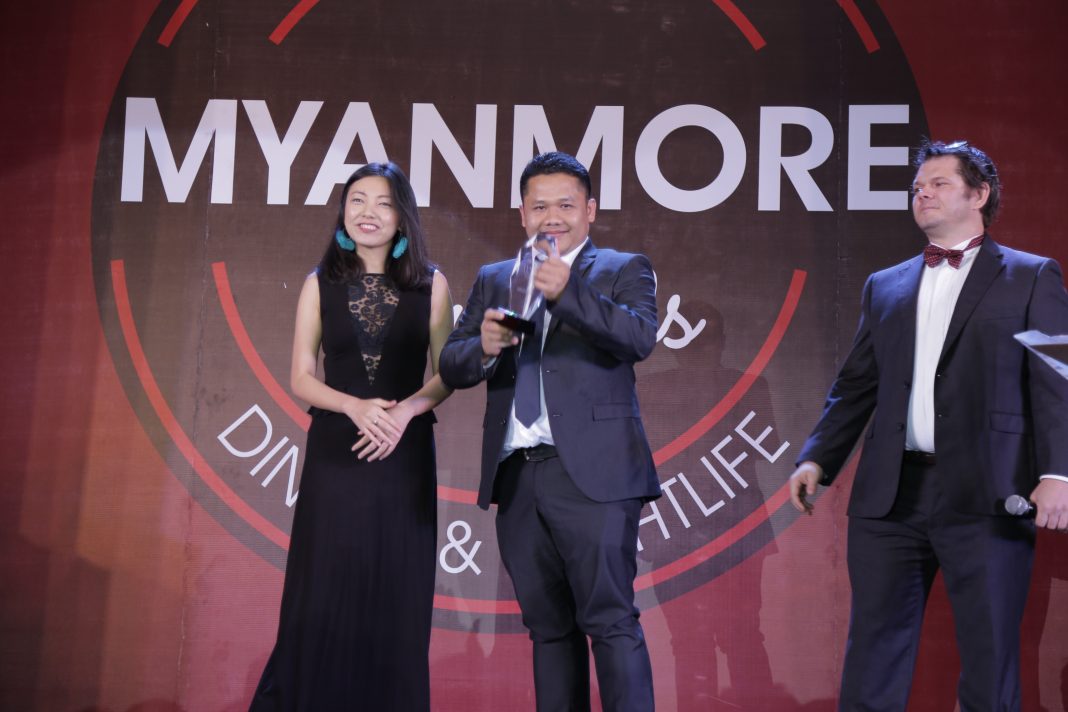 The biggest cheer of the night went to Chef Orng. His journey to the stage was delayed due to the number of people who had leapt from their seats to congratulate the chef who, despite only opening his first restaurant less than a year ago, impressed the judges with his meticulous approach to food.

Chef of the Year was a particularly difficult award to select for the Myanmore judging panel this year, as Yangon is blessed with such a wealth of international talent in the kitchen. But after a great deal of deliberation and dégustation the panel were firmly in agreement that Chef Orng of Orng’s Kitchen was without a doubt worthy of this title.

Chef Orng’s meticulous attention to detail and consistency were the deciding factors in the panel’s decision. Every single diner who visits his restaurant receives an exceptional experience at a standard on par with a Michelin star restaurant on every visit. A secondary and equally important consideration of the panel was the emphasis Chef Orng places on the affordable price of his fine dining offering.

Chef Orng began his culinary career working as a part time kitchen porter at a small restaurant near Edinburgh in Scotland, UK, whilst he studied for his undergraduate and masters degrees. He fell in love with the working environment of the kitchen so much that when his studies had finished, he stayed on in the industry and slowly climbed the ranks. Starting out as a commis chef at Seafood Restaurant Ondine in Edinburgh, he eventually worked his way up to junior sous chef at the Michelin star Restaurant Castle Terrace. He briefly led his own kitchen brigade in Scotland before returning home to Myanmar in 2016. Inspired by the burgeoning Yangon food and dining scene and the apparent abundance of opportunities, Chef Orng decided to stay on in Myanmar and open his own restaurant.

In almost the exact opposite to most new places, Chef Orng concentrated his efforts into his product first and his location second. His dream of presenting fine dining high quality food at an affordable and accessible price meant that he had to compromise somewhat on the location of his restaurant. Although he struggled for the first four or five months, Chef Orng stayed true to his dream and kept pushing himself. And eventually the word got around, he built it and they came, in their droves.

Classically trained in the French style of cooking, Chef Orng has shared his passion and knowledge with his team of young, enthusiastic and talented Myanmar chefs. In his tiny kitchen at the back of his tiny restaurant he has built and trained from scratch some of the best young chefs in Yangon. All who share his passion, dedication to excellence and work ethic. They produce exceptional food, using the best local products available.

Chef Orng says the thing that makes it all worthwhile is a satisfied customer. “Smiling faces, that’s what makes me happy, that’s what it is all about. That’s what all the hard work is for.”

At the end of February ORNG’S Kitchen restaurant will be moving to new and larger premises that will accommodate more diners, and one that will have a kitchen that will give his talented team more elbowroom to work their magic.

The concept will be the same and the restaurant will continue to follow Chef Orng’s philosophy of love dedication and passion.

Congratulations to Chef Orng (and to his kitchen team) on winning Chef of the Year 2018. Myanmore wishes you every success with your new and exciting adventure in the coming year.

Chef Paul, has set the benchmark of quality for Sunday brunch in Yangon, and has excelled in the quality of food he and his team consistently deliver. The Market restaurant is one of the few hotel restaurants to make it into the TOP 100 guidebook, and that is tantamount to his passion, creativity, innovation and consistency in the kitchen.

One nomination we received for Chef Sujit suggested that he was “ahead of the cookbook”. This perfectly encapsulates why Chef Sujit was in the running for this prestigious title. He is a visionary in the kitchen, and the fine reputation that the Marina Indian Restaurant has built up as possibly the best Indian restaurant in the country is very much due to his incredible talent.