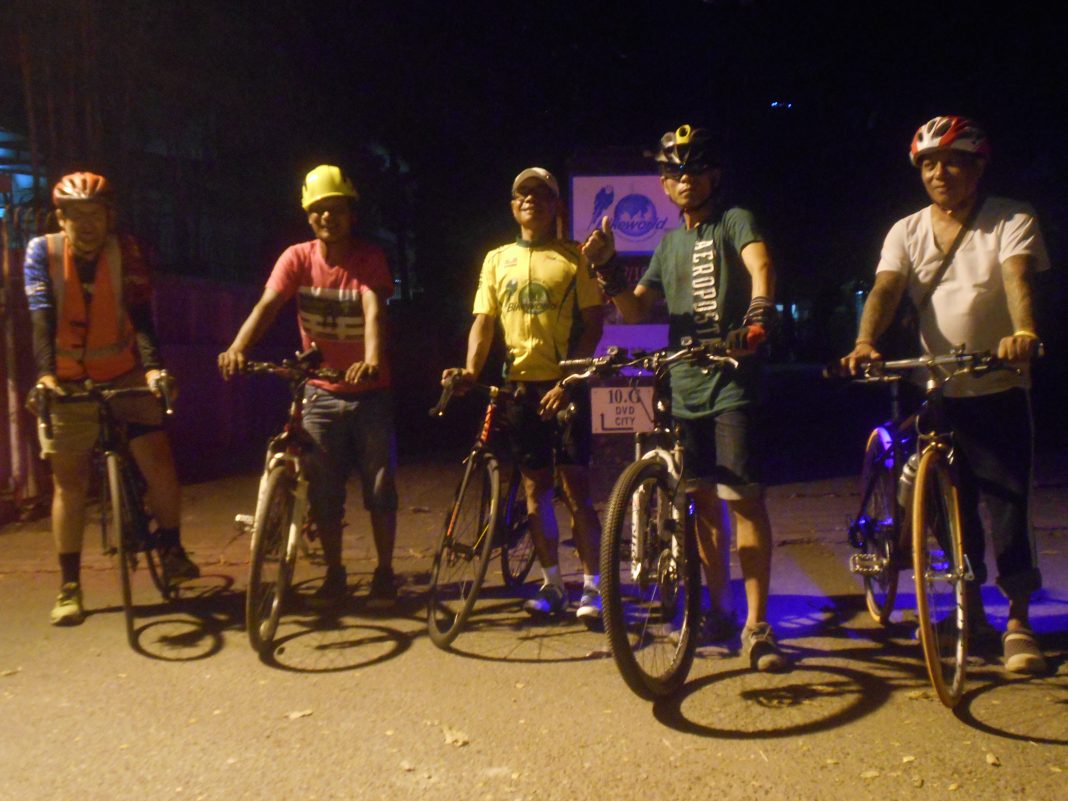 Loren Lee Chiesi joins cyclists on a beloved free bike ride through the city streets. Photos by the writer.

Every Friday at 10pm the workers of BikeWorld Myanmar lock the doors to the Hlaing Township shop and wish a safe ride to the swarm of local cyclists that gather outside the shop. Jeff Parry, the guide for the evening, has been the owner of BikeWorld Myanmar Trading for more than a decade.

Parry first came to Myanmar in 1988 from his native Australia to develop the dairy industry in the country. An avid cyclist since childhood, Parry’s passion for biking manifested into BikeWorld bike shop. Yet, the cycling business was not always easygoing.

“It’s been an unwritten rule in Yangon that no bicycles are allowed on the trafficked roads. There are laws, actual documents, prohibiting the use of motorbikes and motorcycles, but nothing specifically outlawing bicycles,” he said.

However, as the city’s population increased, so did the need for efficient, low-maintenance, low-investment transportation. Over time, the BikeWorld brand developed from a lone bike shop to a tour agency, a 15-room guesthouse with a restaurant (which serves arguably the best thin-crust pizza in Yangon), and the sole distributor of Trek brand mountain bikes in Myanmar.

When asked why he started the free Friday night bike rides, Parry’s answer was as multifaceted as his business dealings. “Well, initially, I just saw it as a way to promote cycling in the city. But, what it’s turned into is a weekly community event. We keep it free, because it keeps the barrier to entry very low.”

He said the choice to keep it on Friday nights was geared to encourage as many locals to participate as possible.  “Many people have weekends off or can, at least, sleep in late on weekends,” Parry explained.

Another benefit is that the infamous Yangon traffic and heat has died down by that time. To enhance the safety of the ride Parry chose routes that are “well-lit and streets that are wide and pretty well maintained.” Riders are encouraged to wear helmets and use bike lights (these items come with the US$15 bike rental fee for those without a bike).

The 21-kilometer Friday night route is well rehearsed and remains the same each week. It starts on Pyay Road near Inya Lake, passes Shwedagon Pagoda on U Wisara Road, loops around Chinatown, and curves around Kandawgyi Lake, before heading uptown through Yankin Township back to Inya Lake. There are three planned stops along the way, to regroup, with the third always at Modern Tea Room on Banyar Dala Road.

Enjoying a tea was rider Markus Halbedel, a German tourist who had just arrived to spend the holiday with family.

“It was not what I was expecting,” he said. “We just got off the plane a few hours before. I thought it would be very relaxed, stopping to see landmarks and get a bit of the history. But no, we are doing real cycling.”

The most expert rider was 25-year-old Soo Gyi, a champion cyclist who rides with the Myanmar national team. “I am here because I like to be around other people that like to bike,” he said. “It’s so much fun to ride at night.”

At 21 riders in total, this Friday night’s group was small. According to Parry, 30-40 people usually attend—“mostly Myanmar locals, some tourists, and generally male.” Parry recalls the largest group comprised a staggering 74 riders.

Currently, Parry and the team at BikeWorld are preparing for their second annual triathlon, which will be held on January 28 at the Alaingni Dam near Bago. Last year, while scouting areas for the triathlon, Parry became interested in Kalitaw, a village just an hour-drive outside Yangon that has no electricity, and until quite recently, no school.

Parry wanted to help; so, he raised funds to build a school. “Right now, there’s 30 students and two teachers, all funded by BikeWorld and donations,” he said.

Parry hopes to add more teachers, grade levels, and electricity. He believes that education gives impoverished students more options and life choices that wouldn’t be available to them otherwise. “There’s a real value [in Myanmar culture] on education,” he said. “I think our efforts can add to the cultural foundation that’s already there.”

So, be it breaking the cycle of poverty or night cycling around Yangon, BikeWorld’s future in Myanmar is right on track.

For more information on BikeWorld’s bike tour and triathlon visit their website: http://www.cyclingmyanmar.com/

To donate to the Kalitaw School, visit their Generosity website: