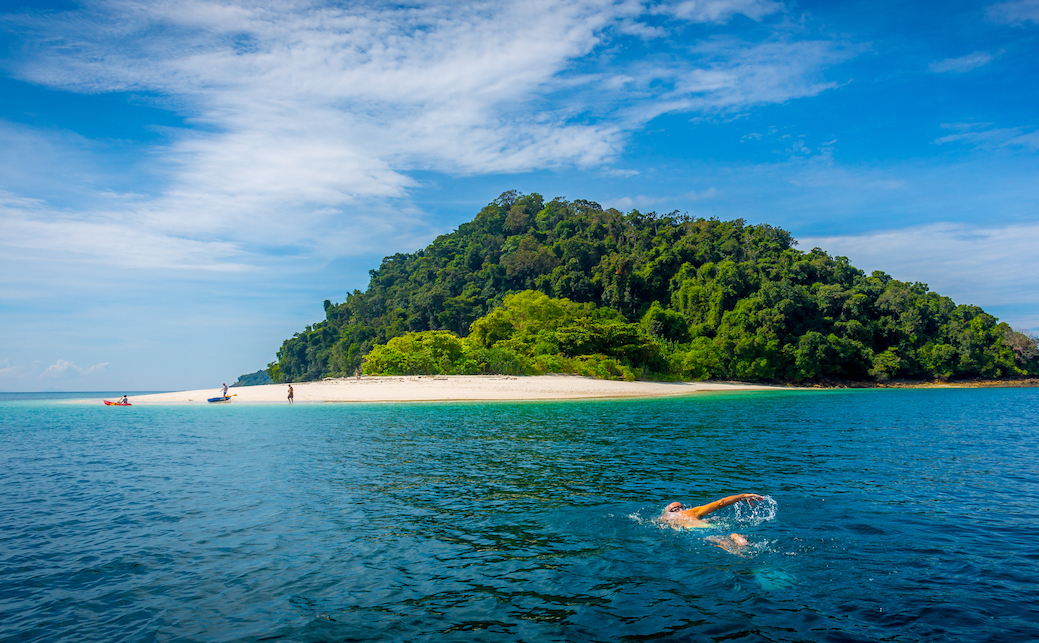 In Myanmar’s deep south, the remote 800 or so islands of the Mergui Archipelago have remained inccessible, hidden, and mysterious. But soon – as Keith Lyons discovers – more intrepid visitors seeking a ‘back-to- nature’ experience may be able to get the pristine white-powdery sand between their toes.

When the MV Sea Gipsy rounded the rocky headland and cruised past the guarding
limestone pinacles, we all assembled on the upper viewing deck to survey the unfolding
scene.

Some of the eight passengers aboard the converted Burmese cargo boat, roused from
afternoon naps in mahogany-trimmed open-air quarters below, rubbed their eyes, and
blinked at the panorama. Between a vast expanse of sky overhead, and the deep teal
Andaman Sea below, lay a broad forest-cloaked island.

Others reached for their cameras, or peered through binoculars, as we sailed into the
bay, scanning the long ribbon of white sand hemmed between dense, dark-green jungle and an azure coral reef.

A sea eagle soared on the thermals above a promontory. It seemed an auspicous sign.
As we transfered to a small runabout to ferry us to dry land, a school of small fish lept
out of the water in silvery synchronicity.

The crisp sea breeze – salty sea charged with negative ions and infused with vegetative
lushness – was pushing in gentle swells which tumbled and spluttered onto the shore. I
clambered ashore, feeling the fine sand beneath my feet. Above the white noise of the
waves, I heard Bjorn Burchard of Moby Dick Tours declare, “Welcome to Boulder Island.”

To be honest, I didn’t know what to expect. Off-limits to all for half a century, and a
challenging (and prohibitively expensive) destination since Myanmar’s opening up, the
string of islands off the southern coast has been coveted by divers and those seeking
respite from the stresses of modern life.

Not only was I going into the great unknown, but I held a deeper question: how would I
‘be’ in that place. And more importantly: where will I sleep?

I need not have worried. For tucked behind the coastal screw-pine palms were rustic
wooden bunglows with thatched roofs and sea views out to a landmark perched
boulder. Combining a down-to- earth Myanmar ethic with a Scandinavian design
aesethic Boulder Bay Eco-Resort occupies one of most diverse islands, situated at the outer edge of the Mergui Archipelago. Five hours’ cruising from the gateway port of Kawthaung, adjacent to Thailand’s Ranong, the island is blessed with fresh water springs, and soon will be self-sufficient with its own solar energy farm, with plans for a permaculture kitchen garden. The resort is ‘walking the talk’ when it comes to a minimal environmental footprint, so guests arriving on the scheduled twice-weekly trips ‘take only photographs and leave only footprints.’

Visitors are among the first to step foot on many beaches in the archipelago, says
Burchard, a self-confessed island addict who has been involved in tourism and
hospitality in Southeast Asia since he left his native Norway as a 19 year old. “There are
some islands that haven’t been properly mapped, and some islands don’t even have
names. This really is quite a special place – much of its charm and appeal lies in its
untouched nature.”

Having watched the demise of other island destinations in Thailand, he is an advocate
for sensitive, small-scale eco-tourism that provides soft adventure activities on land and
on water. “Mergui Archipelago is the ultimate ‘get-away- from-it- all’ destination. I
sincerely hope it doesn’t turn into another Phuket.”

While only a handful of people visit each week, the 135-hectare (half a square mile)
Boulder Island hosts an amazing variety of plants and animals, including some IUCN-
listed endangered species. Burchard is pushing for Boulder to be the first marine no-take
zone in the area. Colonies of branching, plate-like and sponge corals provide a rich
habitat for teeming fishlife, including brilliantly-banded surgeonfish, gliding angelfish
and the iconic clownfish lurking in sea anemones.

But after we snorkel out to a vibrant reef at one of the island’s four beaches, a short hike
along jungle paths away, Burchard says more than preservation is needed. Circles
devoid of coral from dynamite fish and dragging boat anchors are being restored using
discarded fishing cages found washed up on beaches, in a trial by Project Manaia. Fish are already returning to these new habitats where coral is growing again.

Around a communal dining table Burchard and David Van Driessche, a Belgium
photographer and photographic location scout (expeditionsinphotography.com), share their concern for the indigenous inhabitants whose semi-nomadic sea-faring lifestyle is under threat. Prohibitions prevent the Moken ‘sea gypsies’ from felling trees to make their traditional wooden boats, says Van Driessche, who leads boat-based tours of the islands. The combination of place and people make the archipelago truly unique, he says. “Where else on this Earth can you find such a place?’”

Where else indeed. I took a kayak out for one last paddle over the crystal-clear waters of
the Boulder Bay reef, sitting back to savour the serenity and solitiude of it all, as the sun
set on a perfect day in the newfound tropical paradise.

Getting There: Flights from Yangon to the gateway port of Kawthaung, cost around
$US160 one-way.

Entry: a marine park fee from US$100 upwards depending on route and length of stay
must be paid in fresh, crisp new US dollar bills.

5 new restaurants worth your time