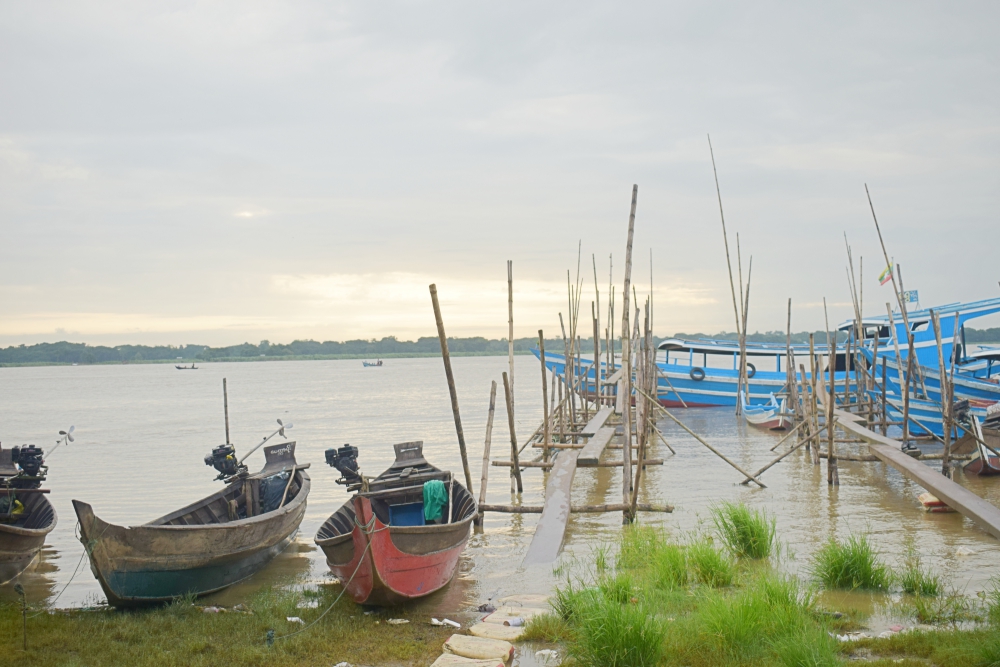 Travelling through the Ayeyarwady Region

Off the tourist trail, Nyaungdone and Danubyu harbour the charm of delta life and make for a pleasant weekend escape from Yangon. Stilted wooden houses and plush rice fields offer snapshots of local life, while monastic complexes of dilapidated colonial buildings promise an intriguing insight into British imperial history and Buddhist tradition.

Locals may know Nyaungdone as the birth place of prominent Burmese poet, Pho Thaukkya, but few tourists and expats have heard of this quaint rural town 50km north-west of Yangon. It’s easily reached from the big city – just hop on a 1,000-2,000ks bus at Dagon Ayar Bus Station and you’ll be there within the hour – but expect protracted passport and visa checks upon arrival because of the lack of tourists. Fortunately, the locals are welcoming and keen to help however they can.

Accommodation options are twofold: Osaka Guesthouse in the centre of town and Kay KhaingOo Guesthouse on the verdant outskirts, about a five-minute drive from Nyaungdone’s downtown area. The latter is run by the friendly Peter Lwin, who kindly let me use his moped for the day and later treated me to dinner and Myanmar’s favourite spirit, Scotch whisky. For 8,000ks you can stay in a double room with a shared bathroom, or for 20,000ks you can upgrade to a double bed with an ensuite.

Nyaungdone sits at the point where the Irrawaddy River, the largest of Myanmar’s many rivers, diverges into one of its tributaries, the Pun Hlaing River. The riverside walkway may not extend far, but a stroll along it nevertheless offers an insight into life on the river’s edge: whether it’s to transport the principal local crops of rice and corn, go fishing or simply as a soothing spot to squat down for a chat, the Irrawaddy is the essential provider.

There are three main pagodas in downtown Nyaungdone and all are worth visiting. NaingganayePaya, is decorated with shiny mosaic columns and houses a 48-foot seated Buddha built in 1913. The scene at sunrise is especially pleasing, as worshippers sit round low wooden tables and ladle out rice over cups of plain tea.

MogokPaya is scattered with buildings of red, gold and green and features an elegant pagoda flanked on either side by towering palms. A narrow path through a swampy garden leads to its southern entrance, and outside its northern entrance stands one of the country’s ubiquitous, weather-worn statues of General Aung San.

MahadediPaya is Nyaungdone’s most striking pagoda, and walking round its photogenic complex is a rewarding experience that shouldn’t be missed – no matter how many pagodas you’ve seen. Commanding chinthes (lion-like creatures) guard the western entrance, but its true allure resides in the delicate yet profound contrast of intricate golden trelliswork and modest red-edged buildings.

The Ayeyardwady Region is at the forefront of Myanmar’s rice production, and just outside Nyaungdone lie many flourishing rice fields which are best viewed by bicycle or moped.

If you’re lucky, you may even be able to visit a local rice mill.I was invited into one by a friend of Peter Lwin’s, whose business exports rice to China. Lying just off the road between Kay KhaingOo and downtown Nyaungdone, this dusty, atmospheric warehouse provides a wonderful opportunity to see men and machinery at work, sorting, sifting and packing thecountry’s chief export.

Situated on the Ayeyardwardy River about 30km north of Nyaungdone, Danubyu is best known for its attractive paya-kyi and as the place where King MahaBandula was finally defeated in the First Anglo-Burmese War (1824-1826). Catching a bus from Yangon or Nyaungdone is the easiest way to get there, bicycle or trishaw the favoured ways of navigating its small streets (though tourists may prefer their own two feet). Besides its bustling market, Danubyu moves at a pleasantly slow pace – even the enormous fruit bats that emerge around sunset flap their wings languidly.

Like Nyaungdone, there are only two guesthouses – but this time both are to be found in the town centre. Again, expect to pay around 8,000-10,000ks for a double room with a shared bathroom, and anticipate more stringent passport and visa checks. Once you’re finished with the legal formalities, though, Danubyu has plenty to offer.

The grave of MahaBandula lies in a remarkable monastery mainly comprised of neo-colonial buildings. This may seem a cruel irony – considering he was defeated by the British in 1825 after an unsuccessful attack on Yangon the year before –but MahaBandula is believed to have died in the exact spot he’s now buried. MahaBandula Park sits just down the road and features a raised statue of the eponymous kingon horseback.

Opposite the monastic complex once stood an old fort, supposedly built in the Mon period, around 300AD, and renovated by Italian settlers in the 19th century. Sadly, all that remains is a crumbling red-brick walkway extending from the roadside to the riverside, lined by rows of wooden huts.

Danubyu’s most venerated pagoda is a spectacular sight: the gold leaf zedi (stupa) and jewelled hti (umbrella) are resplendent, the old buildings magnificent – especially the red and grey church-likestructure built in 1512. The array of Buddha images and Buddhist statues is also impressive, but perhaps kyaikkalunbon’s main point of intrigue is its mini pagoda curiously contained within a glass room half filled with grimy water.

Danubyu’s vibrant market is a hive of activity that you’ll likely hear before you see. It’s the living heart of this delightful town, and the abundance of flowers, fruit and colourful characters make it a pleasure to walk round. A newly painted beige and green mosque with an elegant interior awaits you down the road, and around the corner a golden statue of General Aung San.

Nyaungdone and Danubyu are charming country towns that provide the perfect opportunity for experiencing life in the delta. Their striking pagodas, friendly residents and quirky traditions ensure an engaging, enjoyable visit and awelcome getaway from city life.