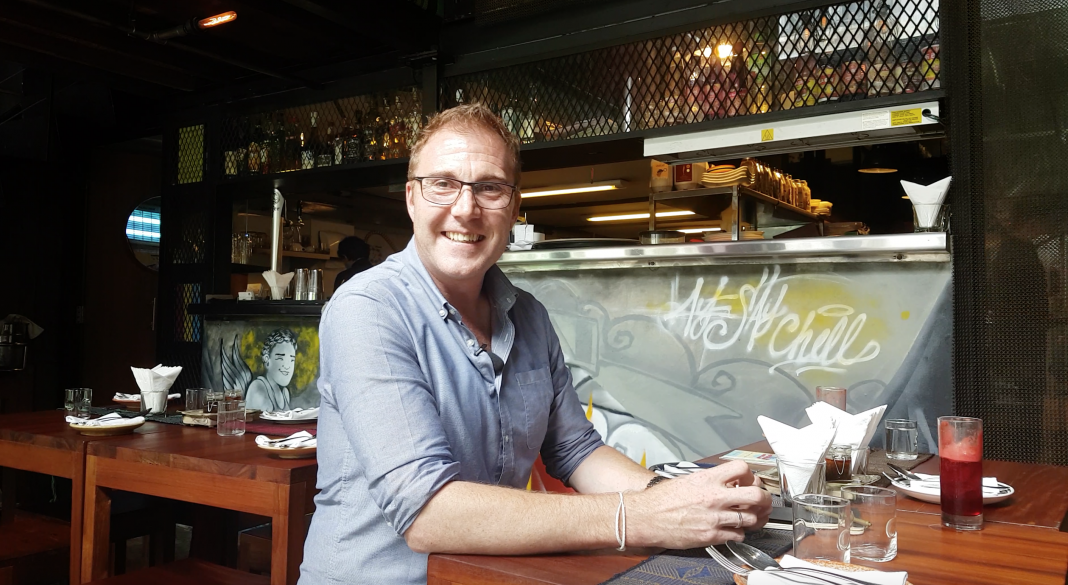 Tin Tin Yangon is charting into new waters and making waves. The venue regularly invites pirate chefs from around the world to storm their kitchen, mutiny the crew, and revolutionize the menu, only if for a weekend.

This week, Tin Tin is relinquishing the helm to Aussie Chef Matthew Albert, an expert in Thai cuisine and former head chef of Nahm London when it became the first Thai restaurant in the world to be awarded a Michelin Star.  Chef Matthew has been in Yangon for a week now, so what has he been up to?

Is this your first time in Myanmar?

Second time. But, the first time I was here I was here about four days.I didn’t get to see much of it. But this time, we’ve seen a bit more, particularly the markets and the things like that.

How do you find it here and what have you been doing so far?

The first few days we hit a few of the local markets, the fresh produce markets, which was very impressive. After that [we’ve been] spending time with the guys in the kitchen. We do about three or four different recipes a day, working with the guys, training them. Then we changed the recipes to adapt to the local ingredients. Towards the weekend, we will be inviting more people in with our dishes that we are going to be putting on the menu.

Let’s go back to the very beginning. Who Introduced you to Thai Food?

At first it was Dave, working with David. I first met David when I was working in Australia. Then, I decided to take a break. I don’t know what the challenge [was] that I was looking for when I decided to leave. Was it cooking, or a career change? I decided to study Thai cuisine. Then, I headed off over to the States and then I ended up in London. That was at the beginning of 2001 and that was when I started to work with David at Nahm in London.

I’ve been cooking Thai food for about 17 years.   Then traveling in and out of Thailand for probably about twenty years. I was trained in western food, obviously, in Australia. I think what captured me with Thai cuisine was the complete challenge. It was something completely foreign and new to me which I found as exciting to learn. Even after doing it for eighteen years I [think] that there’s still a lot more to learn. As you know, it’s a very complex cuisine. It’s also a huge part of Thai culture. Studying Thai culture and having the pleasure of working with [Thai cooks] has been a very interesting and learning journey.

I think there’s no greater honor or pleasure [than] if you’re invited by a Thai friend to their home and see their mother cook, or they cook, where you truly see it in the traditional form. Yes, you have so much beautiful food in the streets and in the markets, and food is all around you, but to see it authentic-style, it’s like a new cuisine. If you go back and somebody’s mother cooks for you, you see the true cuisine itself.

[I’m trying to keep it] more traditional and [with] respect to the traditional techniques of cooking. Also, it probably goes back to, as I was saying with Yangon, that you’re not always going to get the beautiful produce and all the different herbs and spices that you can get in Thailand, but you try to use the best around that’s in the market. So, the ingredients may change slightly to adapt to which area that you’re in. Trying to keep, I suppose, traditional, to its truest form, as much as you possible can.

What have you been doing since the closing of Nahm in London?

I was in Nahm, London for 13 years working with David Thompson and then I left and flew to Bangkok. I was working on the project called Long Chim, which is [a collection of] David’s restaurants more focused on street food-what’s available in the markets and on the streets in Thailand. So, much more relaxed, casual, but still done with the best produce we can source and with respect to the traditional techniques of cooking. So, we opened up in Singapore then we moved to Perth, then Sydney, and then Melbourne. I finished up in Melbourne in April. The team is all up-and running there and we’ve just moved to Bangkok again. So, we took some time off and have been spending some time here in Yangon with the team at Tin Tin.

Have you ever had anyone question why you as a foreigner are cooking Thai food?

Oh, all the time! Especially when I’m in Thailand, the locals ask me what do I actually do, and I tell them. Normally I’ll just start with saying I’m a chef, but then they’ll say, “No, what do you cook?” And I’ll say, “Well, Thai food.” They normally look me up and down and sort of laugh, which is understandable. But, I’d like to think that when they try the food that I can sort of prove that I can sort of cook Thai food. Yeah, it always raises eyebrows and gets a laugh from the Thai when I stand there and say, “I’m a chef and I cook Thai food.”   Yes, they’ll normally laugh at me at first!

What could we expect from the pop up menu that you are presenting this upcoming weekend?

I hope some delicious Thai food! We’re working on a few dishes from each category. We want to keep it in the idea of shared dishes, that with tables being shared with friends.

We’re working on a few new fresh salads. Pomelos are beautiful at the moment, in season. So, I want to do a pomelo and seafood salad. The nahm tok of roasted pork with the roasted rice. We’ve found some nice coconut cream in the market, so we’re doing green curry, some massaman curry, a few stir-fries. The guys have just put a wok burner in the kitchen, so definitely a few new fresh stir-fries. Then, looking at even a couple more lunchtime dishes, like the khao soi noodles. You can come in and just have a bowl of noodles and enjoy that more probably at lunchtime. So, trying to sort of put a few new fresh things on the menu that will be appropriate for any time of the day.

There’s a growing trend in Thai cuisine right now in Yangon. So, what would be your advice for them to successfully master Thai cuisine?

I’d never say that I’m a master at Thai cuisine. I’ve got a lot more to learn, yet. I suppose to always run a restaurant is a difficult thing. You need to enjoy it. It’s a hard-enough industry to be in. You need to have your beliefs in what you want to present to the customer and whatever that focus and that belief is, is in the food and in the style that you present it.   Not everybody’s going to love it, and some people will. If you’re happy with your cuisine then you should focus on being proud of your cuisine. It shouldn’t change because you get a lot of comments about a lot of things. You should keep it true to how you feel.

Book your tickets at [email protected]

“Keep myself busy and stay positive”: Q&A with Christophe Bonzi