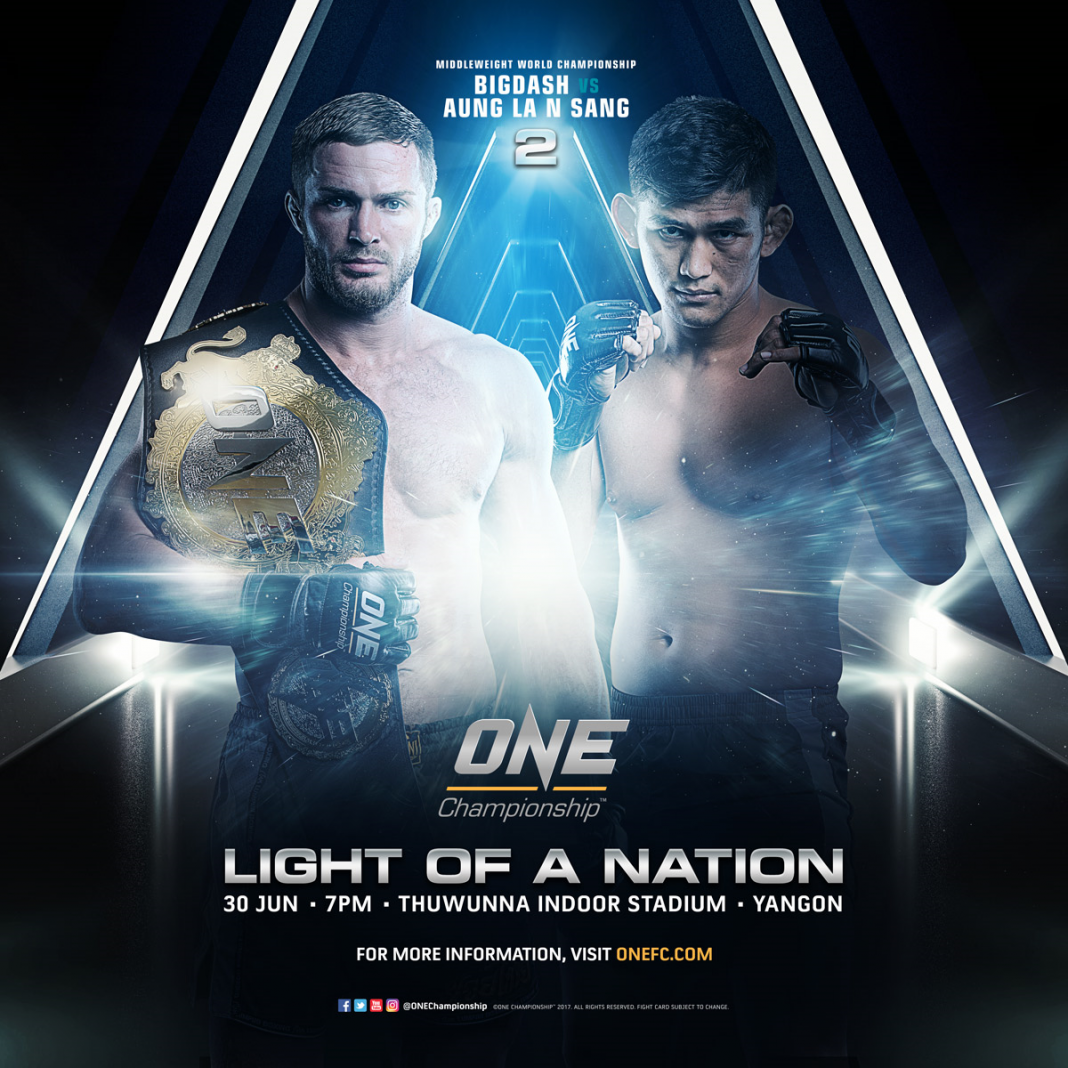 Myanmar national icon “The Burmese Python” Aung La N Sang returns to the ONE Championship cage this June in Yangon against Bigdash.

Aung La N Sang promises to give a performance more worthy of the rightful challenger, as he will have had a full training camp and will enter the biggest fight of his life well prepared.

“The last fight I took on short notice and I wasn’t at my best. This time, with better preparation and a full training camp, I vow to give a much better account of myself,” said Aung La N Sang.

Known as one of the world’s most renowned athletes from Myanmar, whose constricting style of fighting has earned him the moniker of ”The Burmese Python”, Aung La N Sang has emerged as one of the top middleweights in the world. Before dropping a decision loss to Bigdash in Jakarta earlier this year, Aung La N Sang was riding a four-fight winning streak.

Three big wins at home in Yangon had earned him a rockstar following with throngs of rabid fans waiting for him at every turn. Born in Myitkyina in the mountainous Kachin State, he belongs to an ethnic minority known as the Kachin. As such, Myanmar has arguably never had a bigger star.

But as much as Myanmar loves Aung La N Sang, the local hero gives just as much love back and expresses his pride in representing the nation on the global stage of mixed martial arts.

“Competing in Yangon in front of all my fans is such an honor, and I promise to do everything within my power to bring the belt back to Myanmar! It’s going to be an epic battle of attrition, and the better man will emerge victorious on the night,” Aung La N Sang concluded.

As for the champion Bigdash, nine straight victories has earned him ONE Championship gold and immortality. While admittedly Aung La N Sang has turned out to be one of his biggest tests to date, losing the title is not an option, he stresses.

“Aung La N Sang is one of the toughest fighters I have ever faced, and it will be an honor to come into his hometown to perform,” said Bigdash.

This time Bigdash will be defending his title on his opponent’s home turf, in front of what he expects to be an overwhelmingly pro-Aung La N Sang crowd. However, the middleweight kingpin from Rostov-on-don, Russia remains confident in victory despite any geographical disadvantage.

“I am not worried about the hometown advantage, because a true champion can fight anywhere and under any circumstance,” said Bigdash.

“I am excited to get back inside the cage and expect nothing less than a spectacular showing in Myanmar. Although I respect Aung La N Sang and what he brings to the table, I am returning home victorious, and with my belt still over my shoulder.”

Aung La N Sang and Bigdash lock horns in the main event of ONE: LIGHT OF A NATION, set for 30 June at the Thuwunna Indoor Stadium in Yangon, Myanmar. Additional bouts have yet to be confirmed and will be announced at a later date. It’s going to be another epic clash that fans will certainly not want to miss.