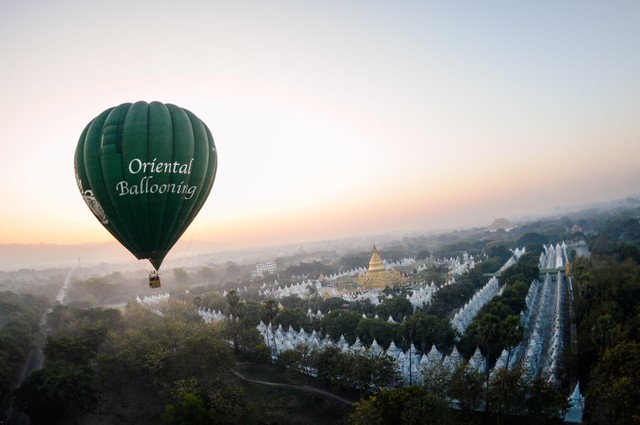 It’s pitch black and we are standing in the middle of the runway at Mandalay’s unused Chan Myae Tharzin airport. It is an unusual start to an unusual event- a hot air balloon flight over Myanmar’s second largest city.

Since 2013 Oriental Ballooning has taken to the skies of Mandalay, the first and only company to offer flights in the former royal capital. Having flown over Bagan, I was sceptical about the morning’s adventure- surely it would not compare to soaring over thousands of pagodas. And I was right. It did not compare. In fact, I would rank Mandalay above Bagan in terms of the actual ballooning experience.

Instead of coasting over temple plains, the Mandalay flight saw us hovering above the crowded downtown area then soaring across Kandawgyi Lake and up along the banks of the Irrawaddy River. From the elevated vantage point I was able to see temple spires jutting out from local neighbourhoods. I could see the Shan Hills off to the east draped in early morning fog and Mandalay Hill beckoning from the north. The city has never looked more beautiful.

During the flight, we would occasionally dip down near the rooftops of houses. In Bagan, balloons are so common place that few people even look to the sky when they pass by. But in Mandalay it was quite the opposite. Everyone- or so it seemed- came out to greet us. Lines of nuns took a break from their morning alms donation to wave at us. Hordes of kids tried to follow us by bike. And when we landed the entire village came over to greet us. And, unlike the Bagan landing, not a single person was trying to sell us souvenirs.
For those unfamiliar with ballooning, the pilots cannot ‘steer’ the balloon. They can only control their vertical elevation, turning on the burners to soar higher in the sky or switching them off to drop down low. They rely on computers to check the wind conditions and then guide the balloon to the right elevation to catch a drifting breeze. Whereas in Bagan there are regulations limiting the air space for balloons, in Mandalay the pilots have less restrictions which means each flight is unique.

On board, our pilot pointed out iconic landmarks and explained the balloons navigation methods. But there were also times when we also flew silently, allowing us to soak up the solitude of the open skies. Due to a change in the winds we touched down on a sandbank in the Irrawaddy River but the next day the pilot landed in the middle of a brick factory in the eastern part of the city. Although I snapped dozens of photos, none of them seemed to do justice to the flight.

I am not alone in my praise of this experience. According to Oriental Ballooning’s pilots, everyone who flies in Mandalay raves about the experience. Passengers have included balloon-enthusiasts who have flown all over the world and guests who wanted to fly in Bagan but, due to lack of availability, were bumped to Mandalay flights. Regardless of ballooning experience, the guests’ praise has been unanimous.

As pilot Bill MacKinnon puts it, “The city offers such a diverse landscape of new and old architecture, so many religious and historical sights, and of course the colour and sounds of a vibrant city that is just waking up as the balloon launches early in the morning. Simply put- Mandalay is one of the ultimate ballooning destinations.” And this is coming from a pilot who has flown over iconic sites like the Swiss Alps and Syria’s Palmyra ruins.

Despite the praise, Oriental Ballooning has had difficulties selling the Mandalay flights. Bagan started hosting flights in 2001 and the images of the balloons drifting over the pagodas is iconic. According to a manager of a locally-based travel company, “It is hard to convince our overseas guests to fly in Mandalay. They have seen the images of Bagan balloons in magazines and on TV. They do not see the lure of flying over a big metropolis like Mandalay. Even though we offer the (Mandalay) flights to guests, they all insist on Bagan.”
While Oriental remains hopeful that the northern destination will take off, they have also expanded their operations to Inle Lake and Ngapali. The Balloons over Bagan company has also started flying at Inle Lake but Oriental Ballooning remains the sole operator at the beach and in Mandalay.

Although the prices are high- rates start around 350,000 Ks for locals and 380 USD for foreigners- a flight over Mandalay is well worth the money. The top-notch pilots and friendly crew make sure all passengers are safe and the customary champagne toast at the end of the flight is the icing on the cake. And whereas Bagan has more than twenty balloons in the sky on any given morning, Mandalay has only one- making the experience even more special.