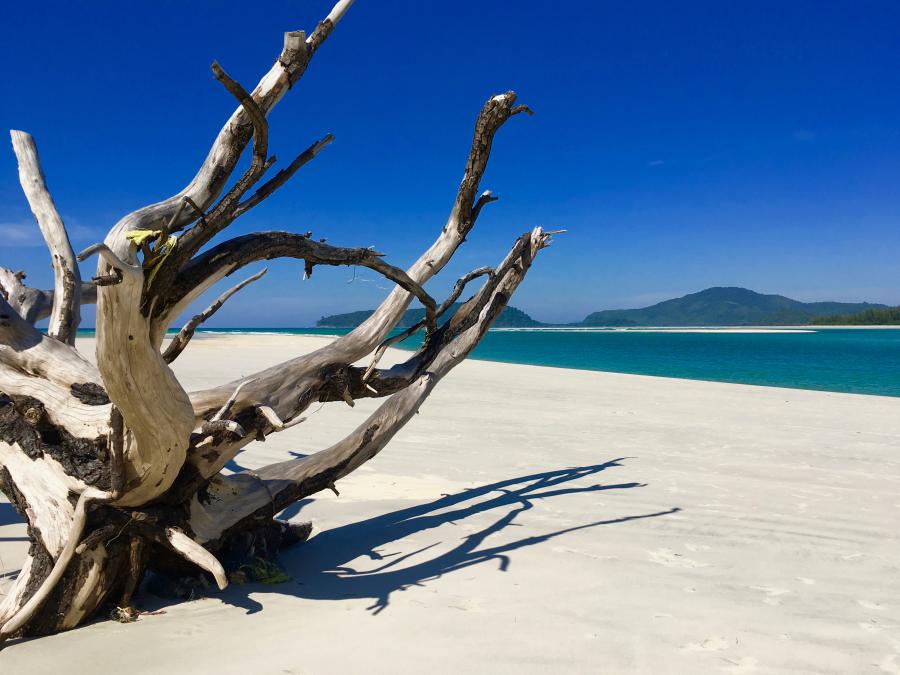 “Without doubt the most jaw-dropping strip of sand in the region, and possibly the whole country, is Po Po Kyauk or Grandfather beach, an hour ride north of Paradise”

A boy grins and raises his arms aloft in celebration as another goal is scored while his friends jostle and scramble to gather the ball. Sporting well-worn and familiar football shirts they enthusiastically kick off to start the game again. It’s an everyday scene familiar to playgrounds the world over. Except this is no playground, it is the scorching sand of a rough and tumble fishing village on Myanmar’s remote southern tropical coast.

The thirsty gaggle, Chelsea, Man City and Everton among others, relieve me of my water bottle, guzzling it down before hurling it onto the beach. It doesn’t matter. This is the village rubbish tip, toilet, fish drying area and football pitch. Welcome to San Hlan.

Like the Ngapi – a pungent fish paste which you either love or hate – which emanates from these parts, it is a place of stark contrasts.

Slumped lazily in an achingly beautiful bay with teak fishing boats gently bobbing in the sea, San Hlan isn’t for the faint-hearted with the stench of fish baking in the searing sun, broken bottles and scavenging dogs bringing a hint of menace.

It’s a place where glassy-eyed tattooed fisherman, their early morning catch already a distant memory, spend long boozy days in the village beer station, deftly picking their way through a fresh portion of local prawn Ceviche, presumably until they are thrown out when it’s time to go fishing again.

Despite its rough edges the welcome here could not have been warmer. Riding into the village on the back of a motorbike I was met with a friendly chorus of Mingalabar – Hello – along the narrow track which serves as San Hlan’s main thoroughfare. Women, packing fish into ice boxes, smile joyfully while chuckling children are bathed in buckets underneath stilted ramshackle homes.

Moments before I had taken a tumble, going head-over- heels onto the unforgiving gravelly road, only to be cared for by a group of local men, checking me over for cuts and bruises like a caring mother would.

San Hlan was the last stop of a three day adventure around the Dawei peninsula, a bewitching 80 km-long finger of land pointing directly south into the glistening Andaman Sea.

Until relatively recently the area, in Myanmar’s Tanintharyi Division, was a tricky place to visit with foreigners forced to get government permits to set foot here. Travel restrictions were relaxed three years ago, but even now only a small trickle of tourists make the journey, partly due to poor, but improving, infrastructure and a lack of places to stay.

Geographically closer to Bangkok than Yangon, the area’s natural treasures are enticing backpackers on the gruelling overland journey from Thailand. Those who do come find a world of stunning scenery with jagged mountains, expansive vistas, soaring Toddy Palms used to make ‘Sky Beer’, traditional fishing villages, waterfalls and, of course, gloriously untouched beaches. The pace of life is slow, the smiles aplenty.

Dawei, a functional riverside town, is the starting point for most trips to the area. It’s accessible from Yangon via a one hour flight or, for those with a lot of time on their hands, a 24-hour train journey. Road access in the region is rapidly improving.

After hiring some motorbikes in Dawei and a quick local fish curry it was time for my travelling companion and I to head south. Soon the main road out of town takes you over the Dawei River before meandering its way down the spine of the peninsula, passing through villages, rice paddies, cashew and palm plantations.

We stop regularly for cups of tea, snacks and to chat with the locals – it’s a long but enjoyable ride. The end of the road, literally, is Paradise Beach, a near-perfect bay backed by steep lush hills and swaying palms.

To get to this remote beauty takes a bit of effort, including a rugged 10 minute ride through a rocky jungle path from Aut Kyauk Wap village, but it’s worth it. Here we stay (at the time of writing) at the only fully licensed place open to foreigners on the peninsula, Paradise Beach Resort.

The setting is perfect, simple huts nestled underneath the palm trees, a small restaurant serving delicious food and very little else. There’s no internet, no mobile phone connection or electricity, just solar-powered charging stations and a satellite phone in case of emergency.

Lazy days can be spent lolling in a hammock sipping fresh coconut juice, riding the surf or swatting away tiny jumping fish as they leap out of the warm water.

After a sunset like molten lava the pace of life drops further as we stargaze by a fire on the beach and watch the lights from fishing boats twinkle on the horizon. Adding to the nocturnal light show there’s year-round bioluminescence, glowing plankton, here too. But there’s only so much lazing around one can do with so many other villages, hilltop pagodas with stunning views and beaches to see nearby.

Without doubt the most jaw-dropping strip of sand in the region, and possibly the whole country, is Po Po Kyauk or Grandfather beach, an hour ride north of Paradise. Named after a nearby mountain it is Myanmar’s version of Whitehaven beach in Australia. A seemingly endless stretch of squeaky white sand, backed by an aquamarine swirl of river that forms a mesmerising lagoon. Backed by jagged mountains the setting is ethereal.

Paradise and Grandfather aside there are dozens of idyllic beaches to discover from the tip of the peninsula all the way up to the well known Maungmagan beach and the endless golden sands of Nabule, both closer to Dawei.

For years now there have been countless rumours about property developers buying up large tracts of land along this wonderful stretch of coastline to turn into resorts but, as yet, none have come to fruition.

Just north of Grandfather beach is Sin Htauk, via an arduous 45 minute journey from the main road, where a small-scale operation rents out beach huts but does not have a restaurant. Heading further north is another stunner, Tizit beach, which is slated for a large Mandolis resort or an oil refinery, depending on who you believe or which way the wind is blowing.

Heading northwards you pass San Hlan before arriving at the picturesque curve of San Maria Bay, nestled into one side of a sandy spit at the end of which is a pagoda built over the sea. Continuing in the same direction you eventually get to the pretty but litter-strewn Maungmagan beach where the cement-mixers have already moved in.

If you want to enjoy this wonderful stretch of sand it might be wise to get there soon. This is the planned site of the $1.7 billion Dawei Special Economic Zone, a stalled project that, according to recent reports, is being restarted with a new Thai-Japanese partner joining the original developer, Italian-Thai Development (ITD).

How to get to Dawei

Where to eat and drink