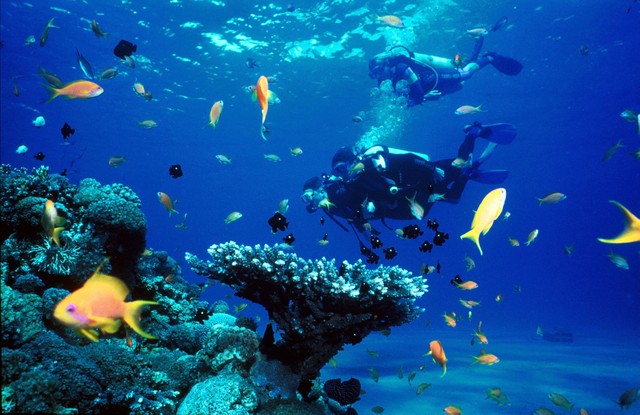 Former church pastor Danny Toy returned home to Myanmar after living in America for 39 years to help share the Gospel. The retired Southern Baptist Minister had devoted the previous five years of his life to “serving the Lord” in Kentucky and he wanted to do the same in the newly reformed country of his birth. But in swapping the Bluegrass State for Yangon, Mr. Toy has found himself sharing a very different passion from the one he intended – Scuba Diving.

“I decided to return back home in 2014 to share the gospel,” said the 66-year-old. “I was doing Ministry in Yangon for about a year when I met Dr. Than Win, who is president of the Myanmar Diving Federation, and he asked me to help out.”

Mr. Toy explained that he has had a long-held passion for diving after moving from Junta-led Burma to California in 1975.

“Diving was always for the military in Burma, so when I moved to California I thought I would learn how to dive,” he said.

Working his way up to becoming a dive master, meaning he was qualified to teach people how to dive, Mr. Toy eventually spent a long career in Long Beach working as an instructor. However, after training more than 1,000 people to dive, and taking in several thousand dives himself, he decided to hang up his tanks in 2007 to concentrate on his religious beliefs.

“I was getting older and I wanted serve the Lord so I retired from diving. I sold all my equipment,” he said.

Mr. Toy moved east to Owensboro in Kentucky, becoming a Southern Baptist Minister for the next five years. Political changes in Myanmar and his desire to share the gospel here hastened his return home two years ago. Having renewed his dive master status, diving now occupies most of his time.

Until recently Scuba Diving in Myanmar’s mesmerising tropical waters was the preserve of expensive liveaboard boats chartered from Thailand, visiting the stunning Myeik Archipelago – one of the best dive sites in the World. As with much of the country, times are very much changing for underwater enthusiasts too, with diving centres now opening up elsewhere along Myanmar’s wonderful 2228 km coastline.

It means you don’t have to spend several, albeit memorable, days on a boat in the Andaman Sea if you want to witness life under the waves. This is good news as it means Scuba diving is becoming more affordable and more accessible in Myanmar than ever before. Mr Toy, who now runs Myanmar Dive Centre, is helping to spearhead the dive drive.

“Myanmar is a wonderful place to dive, many places are virgin dive sites which is a unique selling point,” he said. “I want people to see that. I want to educate people about the water, give them the knowledge and help them to learn about and understand the environment.”

Mr. Toy is one of only two Burmese PADI affiliated dive masters in the world. Many other instructors who work in Myanmar come from other countries. The rush to explore Myanmar’s waters comes with its dangers, largely environmental. In neighbouring Thailand, diving meccas such as Phuket, the Similan Islands and Koh Tao have become overrun with flailing fins and too many boats.

“I can’t see things getting out of control here just yet, but we need to put the correct controls and regulations in place,” said Mr Toy. “That is why we have the Myanmar Diving Federation.

“Myanmar has some pristine areas such as Myeik and this needs to be preserved. Not only from over diving but dynamite fishing and too much fishing. It is up to us to set the right path now.”

Where can I dive in Myanmar?
Myeik Archipelago
The jewel in Myanmar’s underwater crown. With many areas still virgin territory the archipelago showcases an incredible variety of marine life – including Nurse, Grey Reef, and Bull sharks, as well as Eagle and Manta rays, Frogfish, Ribbon Eels and False Pipefish.
It is expensive with prices for a 4/5 day trip starting at around $1000. Getting there too involves a bit of effort with a two-hour flight from Yangon to Kawthaung adding another $300 if you get a return.

Things are set to change in January when the Myanmar Dive Centre opens a new shop in Myeik. They will offer day trips to dive sites at the northern end of the archipelago which are only two hours away by boat.

Ngwe Saung
Known largely as a beach resort 5 hours drive from Yangon, Ngwe Saung is a great and affordable place for beginners to learn how to dive. Although the marine life is not as abundant as Myeik, divers get to feast their eyes on lots of hard coral including giant mushroom coral, lion fish, barracudas and large boulders. The dive sites at the nearby North, South and Bird islands are only 45 mins from the beach, making it an ideal day trip. Prices for a PADI Discover Scuba Diving programme in 2016 start from $100 a day if you are in a group of five or more.

Ngapali Beach
Myanmar’s premier beach location is not just about R & R in front of your hotel. The diving is of a similar standard to Ngwe Saung but there are larger sea boulders to see. Day rates for a local dive site start at $110 while off-shore dives further out to sea cost $150.

Yangon
Thankfully not in Kandawgyi or Inya Lake. Myanmar Dive Centre is able to arrange beginner or refresher courses at a local swimming pool.

Is it safe?
Safety has been an issue in the past with locally run diving operations, highlighted by the death of a Burmese man at Ngwe Saung in 2013. Fortunately, standards are rapidly improving as diving becomes more established here. Myanmar Dive Centre boats all have oxygen tanks and first aid trained instructors. There is a hyperbaric chamber at the Monkey Point Naval base in Yangon for divers who have decompression sickness. This is crucial as you are not allowed to fly if you’re suffering from DCS.

When is the best time of year to go diving?
The diving season in Myanmar largely runs from October until April/May. It is too dangerous during the Monsoon and visibility is poor.