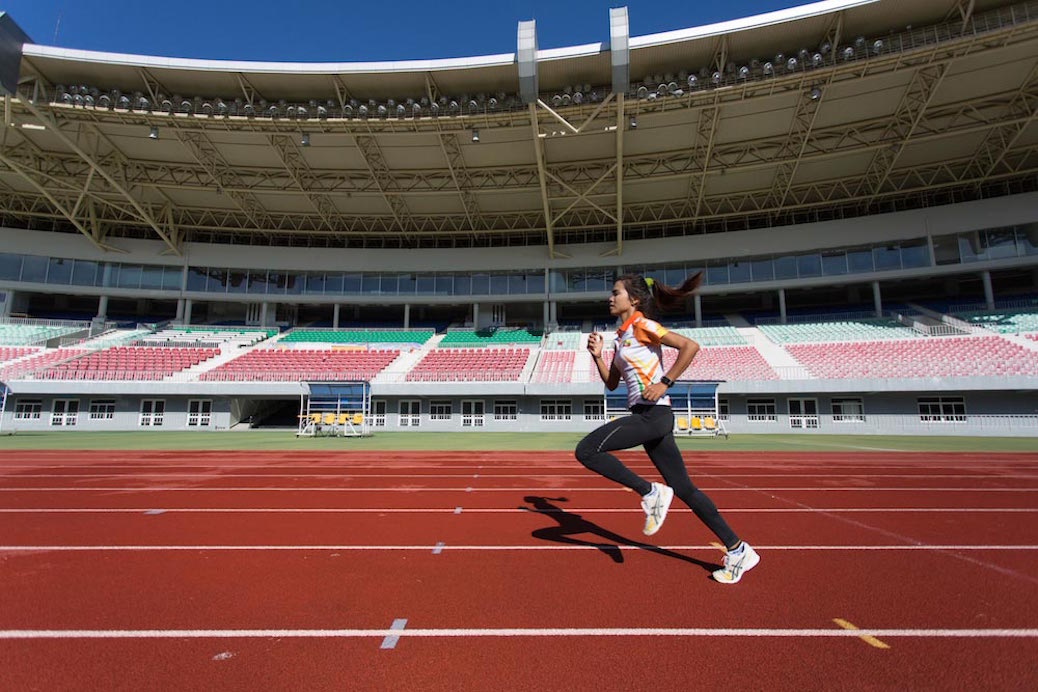 At the 1936 Olympics in Germany 25-year-old U Zaw Weik, a native of Burma, was a proud competitor in weightlifting, but that sense of pride was cruelly denied for U Zaw Weik’s native people. Burma, a minor jewel in the British colonial crown at that time, was thought too unimportant to have its own Olympic team, so U Zaw Weik was forced to compete for Team India.

After the 1936 Olympics, Weik and his mentor, U Shein, visited England and were inspired by the freedom of speech enjoyed by the British people. They realised that colonial rule deprived the Burmese of their fundamental rights and they returned home with a nationalistic goal. Weik worked alongside the leaders of the independence movement to resist British Imperialism. He also established the Burma Olympic Association in 1946, and served as their director after Burmese independence was achieved in 1948.

Despite participating in the Olympics since 1948, Myanmar athletes have yet to bring home a medal. But this doesn’t deter the proud nation’s strong competitive spirit from chasing gold in Rio this month. Working harder than ever in preparation for the games this summer are Olympian track and field representatives Swe Li Myint and San Naing.

Tell me about your local and international experiences.

SLM: I took part in many local competitions and won most of them. My first international experience was quite remarkable, I competed in the 800 metres at the 2009 Singapore Asian Youth Games and won a bronze medal. Since then, at the Thailand games I earned bronze medals for both 800 metres and 1500 metres. I came third in both 800 and 4×400 metres relay in 2013 Myanmar SEA games and second in 28th Singapore SEA games. Most recently, at the Singapore open games in May this year I won gold in the 800 metres. So far, I have won one gold medal, four silver and five bronze. The upcoming Rio de Janeiro Olympics will be my tenth international competition.

KSN: Starting from 2007 I also joined many local games and won many of them. In international competitions, I’ve won seven medals out of nine in the South East Asia open games, where I earned two gold medals, three silver and two bronze altogether.

First of all, tell me about your struggle as an amateur before becoming a professional athlete.

SLM: I went to the Institute of Sports and Physical Education (Mandalay) and noticed that I have a special interest in running. I started running 800 metres races in under-18 state and regional athletic competitions and also in open competitions. My competing performance in 2008-2009 showed proper progress, that’s why I had the chance to continue training in the Yangon Facility.

KSN: I started going to the Institute of Sports and Physical Education (Mandalay) in 2004 and became a trainee for track and field athletics for about three years. During that time I participated in under 18 and under 20 games, winning gold and silver medals. In June 2007 I approached the youth trial representatives of Myanmar in Yangon and became a recognised athlete. I have trained hard since 2004 to become a professional runner.

Tell me about the Rio de Janeiro Olympics you are going to go to. How are you feeling as an athlete representing your country?

SLM: The event I am going to join is the 800 metres middle distance race. The opening of the Games will be on 5 August and it closes on the 22 August. Our delegation will leave on 1 August. My event will start at 10:55am on the 17th. I am very proud that my efforts are being recognised and that I was selected to represent the country. Not only for myself but also for my country and my people.

KSN: The event I will be in is the 5000 metres long distance race. I will have to run twelve and a half laps which is approximately just over three miles. The Olympic games are held only once every four years. The feeling is beyond what words can express. To take part in it, an athlete must be at his best condition ever to coincide with the Olympic dates. I am delighted that the government recognises our efforts and supports us to go to the international games.

How do you prepare for the Rio de Janeiro Olympics?

SLM: Mine is the 800metres middle distance race and I will have to run two laps of the track. So I cannot be carelessly using up all my stamina on the first lap. I need to adjust my pace and race tactics of how I should run and how I can run in each lap. Moreover, as I will be facing many outstanding athletes from all over the world, I should be more careful about reining my own record.

KSN: I am trying very hard every day and night, preparing for my best by precisely following the instructions of the coaches.

What is your current record?

KSN: For the 5000 metres race, my current record is 15 minutes and 11 seconds. I am working hard on improving on this time.

What challenge does a runner face in that split second when you are running side-by-side with the other competitors and the finishing line is just before your eyes?

SLM: In such an occurrence, it is true that the finishing line seems to be within your reach. But at those times, all athletes are suffering exhaustion. We are trying to squeeze out every remaining strength in our bodies to get to that line. But before that line, no one is likely to give up. They might collapse from exhaustion but only after they successfully finished the race.

KSN: I agree. , the last lap is the lap where every athlete uses all of the strength that is left in the body to win the race. The strong desire to finish the race makes every athlete run till the finishing line without giving up, regardless of exhaustion and fatigue.

What attitude do you think a runner must have?

SLM: In a race, even when you are losing, if your record is still better than your normal one, it is not losing at all. Winning or losing doesn’t matter in a competition but the spirit of the competition does. If you can break your own record, then that is the best investment you can make in winning your next competition. Every athlete should have that sort of attitude.

KSN: For long distance runners, attitude is everything. Intense training with a strong will and the mindset that it can be done and it can happen to me. I want every athlete to keep in mind that even if you don’t win the race, you will not go lower than your own record.

Tell me about your daily training routine.

SLM: I undergo training six days a week. Sunday is my rest day. I go to the gym on Tuesday and Thursday. I do power practice in the field for the rest of the week. Normally, the practice takes three hours a day.

KSN: I train seven days a week in the morning and four days in the evening. Wednesday, Saturday and Sunday evenings are for rest. The total time I spend for trainings (including both morning and evening training) is at least three hours a day. Sometimes, depending on the miles I have to run (5 miles, 15 miles, etc), it can be up to four or five hours a day.

What is so special about track athletics? What is the specialty of middle and long distance running?

KSN: It is true that everyone can run, but not everyone can be crazy for sports. Running may be normal, but success is not, and to run as a representative of your country is extremely hard. Endurance comes first in long distance races compared to sprints and middle distance. Moreover, it is more about maintaining the pace. So a long distance runner must be someone with much stamina.

What moments stand out in your memory during competition?

SLM: At the 27th SEA games I was racing against gold medal winner Yin Yin Khine in the 800 metres. I had lost to her at every meeting. But in the SEA games, I was able overtake her on the last lap.

KSN: In 2015 at the 28th Singapore SEA games, I brought home a bronze medal to our country, surpassing athletes from Vietnam, Thailand, Indonesia and other countries who are normally better than me. I will never forget that moment.

What are your plans for the future?

SLM: In the 29th Malaysia SEA games, I am aiming to win the gold medal in the 800 metres.

KSN: Until I retire from being my country’s representative, I will keep giving my best to earn gold medals in South East Asian Games.

“Keep myself busy and stay positive”: Q&A with Christophe Bonzi