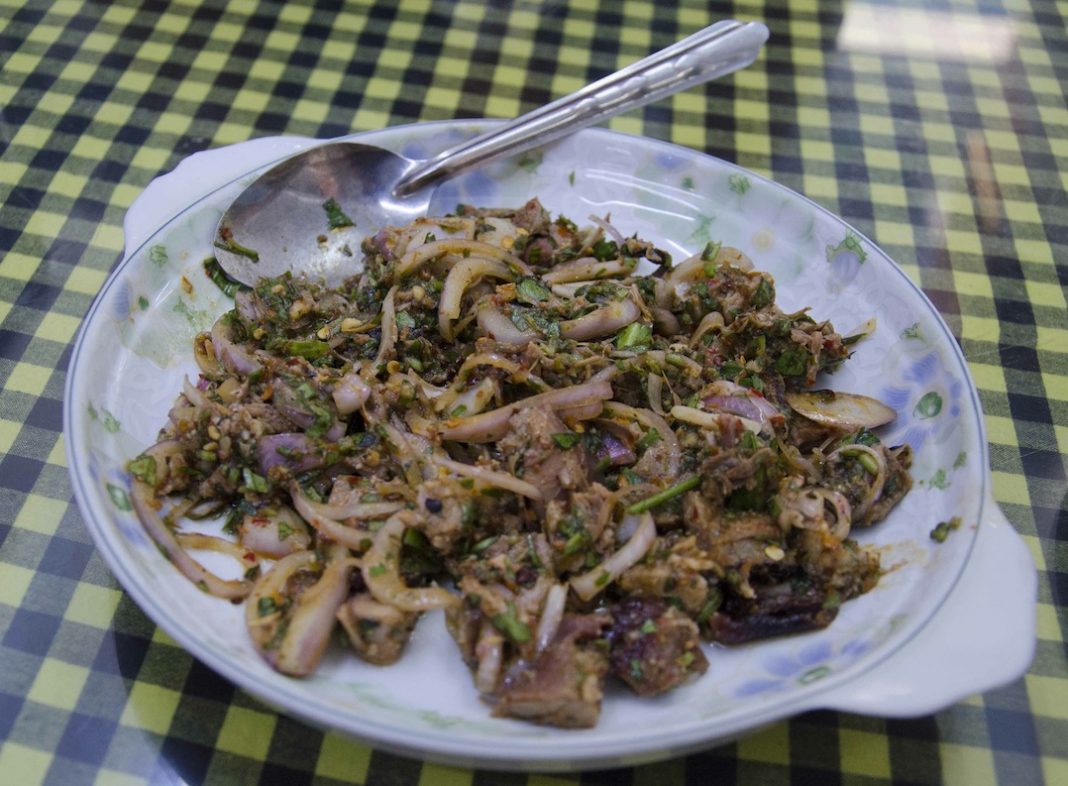 Tea Shop Life is a series that started to promote the local dining scene to the largely western/westernized MYANMORE readership. The establishment does not have to be a tea shop, most of our profiles are on regular restaurants, but they are all owned by Myanmar people and serve Myanmar food to mainly Myanmar customers. Email [email protected] if you have any suggestions for the next ‘Tea Shop Life’. Make sure to ask the owner if they mind a wave of foreigners coming in. Some places are hidden for a reason 🙂

On first glance, the racks of summer dresses and leather purses allow Moe Thiri to pass as a clothing store. The garments are indeed for sale but not the reason why you come to this muslim Chinese-Burmese restaurant in the neighborhood of Kantawkalay. The real reason you come to Moe Thiri is for the duck. The duck makes it worth searching for this dining gem without a sign.

It took a few weeks for me to release this review. Communication was definitely part of the problem as no one at Moe Thiri speaks English, the other part was my apprehension of exposing this intensely local lunch & dinner spot to foreigners. Owner Daw Nang Shin has already built a customer base since opening in 2001, in fact, the restaurant had to double in size in order to accommodate everyone. Fortunately, she welcomes the expat community to try her cooking. She describes her menu simply as Chinese-Burmese, but upon further questioning the cuisine is specifically a mix of Yunnan and Shan.

No alcohol or pork at Moe Thiri, the Islamic art on the walls remind you that this family adheres to their religion’s dietary practices. A lack of booze has not prevented Moe Thiri from being a lively restaurant with a jovial vibe though. The atmosphere begins with the charismatic owner, Daw Nang Shin, who has a way of keeping the staff laughing and on-task. None of the servers speak English but are fine helping foreigners navigate the menu, unless the place is packed, in which case, be confident in your Burmese. You won’t find the same smiles and bows that you get from your hotel help, but you will find efficient workers who won’t botch your order.

A friend of mine casually called Moe Thiri a ‘tea shop’ which is a lazy reference to the open-air layout and social nature between customers and staff. Plus a meal here is around 4500 Ks which is above the price of eating at a tea shop. It is more of a diner than anything else. The brick wallpaper, plaid table clothes and images of religious text on the walls parallel a classic American diner. Decor aside, the interior is well-manicured despite being in a heavily littered part of town.

You shouldn’t have trouble finding a table, even a large one, unless its a Sunday in which case they tend to be near capacity. Moe Thiri has only been on my radar for the past 4 months so I do not know what traffic is like during Ramadan- I would assume dinner is quite active, lunchtime not so much. Popular dishes are often exhausted on the busy days so do not think duck is a guarantee for dinner, especially on Sundays…naturally.

They know their duck is good and will hand out a secondary menu that features the duck dishes that are perhaps more accessible, like Duck and Rice (3500 Ks) or even a whole duck (7000 Ks), accompanied with photos which make them prime targets for foreigners. I recommend resisting temptation and consult the main menu which has the dishes that truly separate Moe Thiri from the dozens of other Chinese-Burmese restaurants in the area.

The Roast Duck Salad (3500 Ks) should be tried by everyone. A plate of bite-sized pieces of dark meat that have been cooked in a mix of garlic, onion, basil and pennywort…but mainly garlic. It a surprisingly light dish even with a portion of steamed rice, a recommended add-on.

Thai Style Chicken (sweet & spicy in flavour) and Stir-Fried Chicken (spicy & sour in flavour) are the fan favourites according to Daw Nang Shin. If we are discussing chicken dishes, I will have to disagree with the crowd and point to their Kachin Style Chicken (3500 Ks) as being a far more memorable meal.

There are vegetarian options, as there are in ever Myanmar restaurant, but no one comes to Moe Thiri for the Morning Glory. Of course, as only one person, I have not tried everything on the menu. That said, I can say with confidence that the Roast Duck Salad at Moe Thiri is some of the best duck I have had in Yangon.

Some expats are unaware that Yangon has street numbers that go as high as 91st (they go well into the 120s for the record). Even less know about Kantawkalay, the middle-class neighborhood inhabited mainly by Hindu and muslim families. Yet this ethnically diverse neighborhood with gridded-streets like downtown is more central than one may think. A short walk from Upper Pansodan or a 5 minute cab ride if near Kandawgyi Park. Daw Nang Shin welcomes all.