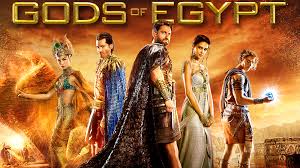 Gods of Egypt is a 2016 fantasy adventure film featuring ancient Egyptian deities. The United States-Australia production is directed by Alex Proyas and stars Brenton Thwaites, Gerard Butler, Nikolaj Coster-Waldau, Chadwick Boseman, Elodie Yung, Courtney Eaton, Rufus Sewell, and Geoffrey Rush. Butler plays the god of darkness Set who takes over the Egyptian empire, and Thwaites plays the mortal hero Bek who partners with the god Horus, played by Coster-Waldau, to save the world and rescue his love.