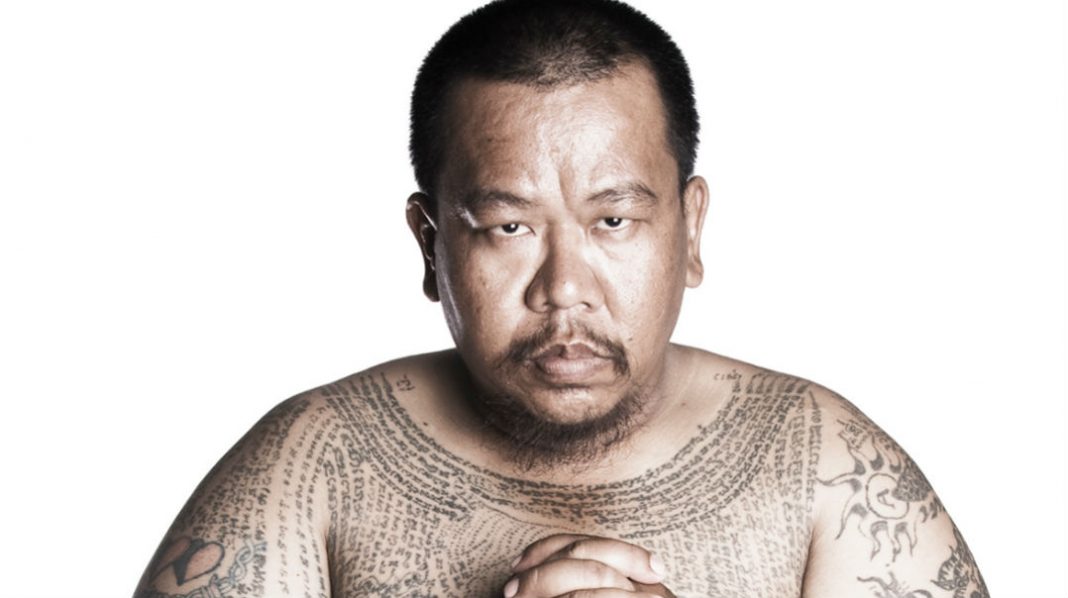 On a sultry Monday morning, Ajarn Neng Onnut’s studio, known locally as a samnak, which sits tucked away in a quiet back street on the eastern outskirts Bangkok, is packed. Monday is the most auspicious day for women to see a tattoo master and to receive a sak yant, a sacred tattoo. The visitors believe that the tattoos will afford them protection from accidents or enemies, increase their attractiveness, help them get rich, or simply calm their troubled minds.
For Thai men, this tradition goes back hundreds of years. For women, it’s a sign of changing times.

Ajarn Neng is not surprised by the increase in female devotees.

“A decade ago, sak yant culture was very different. Few women got tattooed then. People have more money and more independence nowadays. As a consequence the perception of sak yant has changed from having predominantly protective powers to bringing good luck. This makes sak yant more acceptable amongst the general population.”

Sak is the Thai word for tattoo. In India, yantras – geometric patterns and diagrams – have been drawn or carved on a variety of materials – cloth, wood, paper or stone – for thousands of years. The diagrams are used to focus the mind and they are said to have magic powers. From the 3rd or 4th century onwards, the yantras moved east. Brahmin priests worried about Buddhist domination on the Indian subcontinent during the reign of Ashoka arrived in southern Thailand, along with increasing maritime trade, and spread knowledge, commerce and a different culture. Other theories hint that Hindus exported yantras from India directly to Cambodia’s Angkor Empire which ruled much of Southeast Asia from the 10th to the 13th century. When the Siamese plundered Angkor in 1431, they may well have taken the yant tradition with them. It’s uncertain when the magic symbols were first worn on the skin, though stories from the kingdom of Ayutthaya, which ruled today’s Thailand from the 14th to the 18th century, suggest that Siamese soldiers lost their jackets, embroidered with protective yant, in battle so often that they began to ink sacred spells and images onto their bodies.

“Sak yant are a powerful reminder for us to stay on the right path.”

The mantras that accompany the sacred images, known as kata, are no longer written or spoken in Sanskrit but in Khom, an old Khmer script. The incantations tattoo masters pronounce before, during and after the application of a yant are in Pali, the liturgical language of Buddhism.

Any tattoo master worth his salt must be a master of both languages. Alongside sacred diagrams from India, local Buddhist charms, Burmese spells and assorted traditional images both sacred and profane are used as yant. Each yant has a different purpose – to help the wearer get wealthy, increase his chances to find a partner or protect his health. Both Buddhist monks and ajarns – tattoo masters who work in small studios in local communities – apply sak yant and act as moral guides.

Says Ajarn Neng, “Sak yant are a powerful reminder for us to stay on the right path.”
Indeed, all sak yant devotees are given a set of rules, starting with the five basic Buddhist precepts, which they must follow if their yant are to retain their magical powers.

Traditionally, sak yant have largely been the domain of the working classes. Thailand’s rural population finds little space to express itself in mainstream culture. In media, up-country folk are routinely portrayed as buffoons. The sacred tattoos are one form of expression that has been mostly theirs. Soldiers, policemen and gangsters are also known to be partial to the sacred tattoos as some promise protection from knives, bullets and other forms of aggression. Consequently, Thailand’s middle class has long turned its nose at the tradition. But this has been changing in the past decade.

Num, one of Ajarn Neng’s devotees, his entire back covered in yant is part of the new type of devotees the tradition attracts. The 28 year old civil engineer sees himself on the forefront of change. “My generation will make sure that sak yant will filter into all social classes.”

Chinese people love my tattoos because they think they will make them rich.

Ajarn Neng once made his money as an interior architect. But the 38 year old gave up this first career to become a tattoo master after he’d met another ajarn who was to become his mentor. He had picked the right moment. “The public image of Sak Yant is definitely changing and the sacred tattoos are finding increasing local acceptance as well as international acclaim.”

Ajarn Neng and many other tattoo masters now travel around the world to dispense sacred diagrams and incantations.

“Chinese people love my tattoos because they think they will make them rich. Sak Yant are very popular there. I don’t get many Japanese devotees though. I understand tattoos have a bad reputation there because of their association with organized crime. I have noticed that when I visit a Japanese temple, people look at me in a critical way because I have many sacred tattoos.”