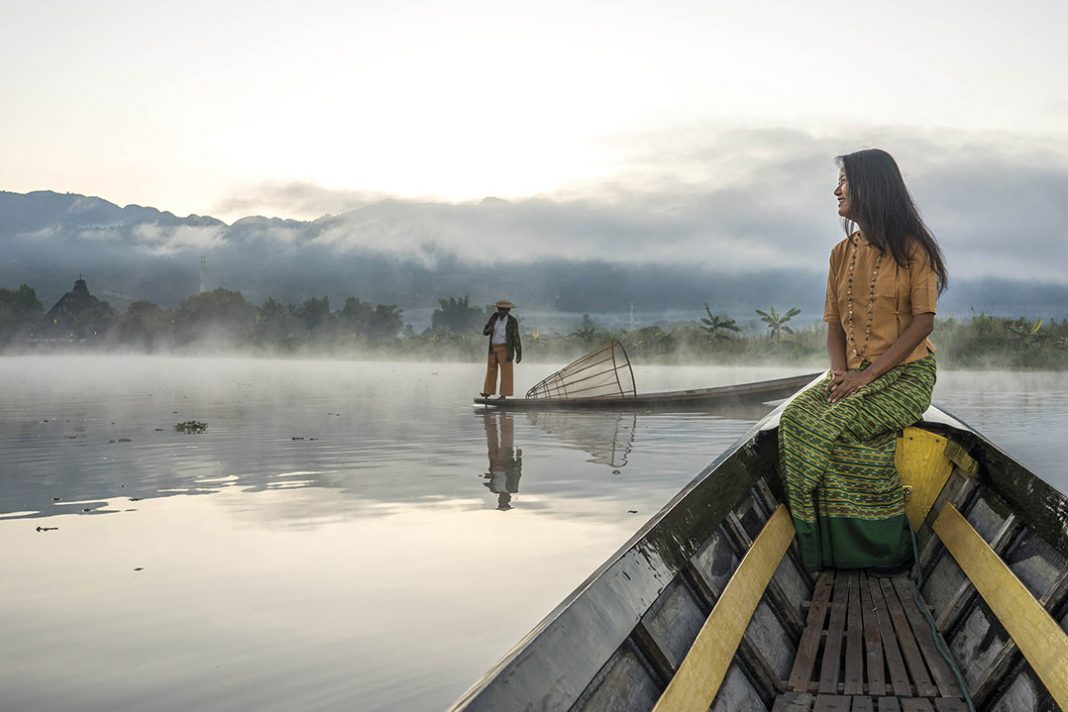 Born and raised on Inle Lake in Shan State, the founder of the Inle Heritage Foundation says she hopes to show the world there is more to the Inthar people than being famously able to row on one leg. Yin Myo Su has a number of projects on the go – the most recent venture to preserve the heritage and culture of her people. What sounds like an ambitious yet relatively straightforward goal is really a hugely varied task that has seen her build a living memory of the home she was raised in, to founding a start-up facility for a hospitality and food and beverage training centre for local Shan youth, and a breeding program to reintroduce Burmese cats back into Myanmar.

In Myanmar astrology, the Rahu is the sign of the Wednesday-evening born elephant. The Rahu is at once independent yet unfailingly loyal to her family, determined and focused almost to a fault.

I told my father when we went into this business that I couldn’t operate it as a manager who answers for 99.9 percent – it had to be 100 percent my management.

One description of the Rahu states: “You can be hard to figure out because of your contradictory nature. You are a private person and do not like people meddling in your business. However, you are excellent at promoting yourself and your works. You like taking action, but only if it’s a sure thing (little risk involved). You are very successful (especially in business) and you are able to accomplish achievements on your own terms.”

Wednesday-night born managing director of the luxurious Inle Princess Resort and founder of the Inthar Heritage Trust Foundation, Yin Myo Su – who is also affectionately known as Misuu – demands one hundred percent control of the projects she oversees as managing director, even if her business partners include her family.

“I told my father when we went into this business that I couldn’t operate it as a manager who answers for 99.9 percent – it had to be 100 percent my management.”

As a result, Misuu fully oversees all the operations of the family-owned 36-bungalow resort and its sister-resort in Mrauk Oo in Rakhine State. She has her own social enterprise at the Inle Heritage Trust, which comprises a number of projects all linked to the notion of heritage, conservation and training for local youth.

The Inthar Heritage House is actually a replica of the home she grew up in and is decorated with memorabilia that once belonged to her grandparents. Guests can visit the house for lunch, which is catered for from a kitchen that cooks her grandmother’s recipes. They can also choose to stay in one of the six bungalows that make up the bed and breakfast style resort, Thahara, where students attending an intensive hospitality program are given practical training.

A unique twist to her heritage projects is the reintroduction to Myanmar of the Burmese cats. That feline component of the heritage project has resulted in her being dubbed the nom du plume that she says she feels entirely uncomfortable with – “The Cat Lady”.

“I looked up that definition!” Misuu exclaims. “That’s like an old lady who needs to surround herself with cats to feel like she is loved! I don’t even like cats that much.”

“My mother tells me she gets tired just from watching me run around and work,” Misuu says with a fraction of exasperation to suggest she has numerous more plans to wrought out.

Misuu, 43, can be hard to keep up with. She speaks frankly, has many ideas – is inexhaustible with her many ideas, is always planning her next move well ahead of making it and as I ponder one thing, she switches to the next subject. All the while, we manage to laugh a lot.

It’s one of her charms that Misuu is able to not take herself so seriously. The first time we meet in Yangon, she conspiratorially leans over toward me.

“My daughter told me not to talk too much,” she confides. “She knows how I get!”

So where does all this motivation come from? I have a chance to ask her the second time we meet, this time on her homeland turf at the idyllic Inle Lake in Shan State.

Misuu explains to me how being able to express herself clearly, of talking about her successes and her aspirations, is a relatively new ability for her.

An epiphany of sorts struck on her 40th birthday, she says.

“I felt like I was in a meditative state but actually it was just the first time that I had been alone without distractions for a long time,” Misuu recalls. “It was my birthday and I was always the one organising others, but on this day I was on my own abroad and it made me realise how little I did for myself.”

Never one to shy from an opportunity for self-growth, Misuu set herself a task to list all the things she did regularly for herself and not for the enjoyment or sake of others.

“I had an A4 page in front of me and I remember being only able to list about three things and thought that was so sad, you know?”

**
Rewind to 1988 when she was 16 years old. Concerned with the news coming from Rangoon about the brutal crackdown on student protests and feeling a strong intuition for wrong and right, she starts campaigning for the pro-democracy movement and joins as a member of the NLD Youth Committee.

Her family is inadvertently swept into the political matrix, her father becoming a candidate for the hugely popular National League for Democracy and winning his seat of Nyaung Shwe on 27 May, 1990.

A thwarted democracy movement and she is encouraged to move abroad, as far as possible to avoid the backlash. Unfortunately her father doesn’t escape the fallout and spends more than a year in prison under the re-established military regime.

This is how Misuu eventually finds her craft – in the art of hospitality. After a few false starts, she attends the Ecole Hotelier in 1991 and graduates three years later.
Eventually, she returns to Myanmar, to rebuild her life and her home at Inle Lake.

The whole business was nearly lost in 2007 when monk-led protests against the rising cost of living brought Myanmar to yet another standstill. Slowly, just as it seemed the Inle Princess would survive, Cyclone Nargis in 2008 effectively shut down tourism all together across the country. Back-to-back years hitting the red line nearly brought her to declare bankruptcy, but the resort manages to keep running.

Misuu says the unrelenting loyalty of her staff is what got them through, but her staff attribute it to her style of management. She has an unbending faith to believe in others, trusting that they would ride out the difficult times together, to find a solution together.

Since then, there have been a few more challenges for Misuu that have provoked deeply private ruminations about what she wants to experience and achieve as a woman. But also prominent in Misuu’s musings is her quest to strive for simple, day-to-day satisfaction from what she does.

In her forties, she feels she is able to make firm decisions about what makes her happy and she is more emotionally secure, less wanting to seek out approval from others.

“In tourism, the private sector is benefitting but we have to ask ourselves, are we doing everything to share our benefits? And that includes for our heritage and environment. It’s everyone’s job to spread the wealth, this is all of our htamin ohe,” she says, referring to the Burmese words for “rice pot”.

This period is one of transition for Misuu, where she says turning 40 has been an awakening of sorts. In her forties, she feels she is able to make firm decisions about what makes her happy and she is more emotionally secure, less wanting to seek out approval from others.

Her work as a social entrepreneur, business woman and visionary has seen her lauded with numerous international accolades including the 2015 Goldman Sachs and Fortune Women Leaders Award and the Vital Voices Global Leadership Award in Washington DC.

But as the old adage goes, we are our own worst critics. Misuu is probably the hardest on herself. Even as she pushes to introduce new social enterprises and laws to protect small and medium sized businesses in the tourism industry, she feels she needs to do more.

Even officials who are reticent to compliment private entities will publicly recognise her contribution toward Myanmar’s tourism industry. At a conference held in Yangon earlier this year on the topic of women and tourism in Myanmar, one minister singled her out as an example of what Myanmar women can achieve, given the opportunity.

Ironically, that is the sticking point for Misuu. As she strives to create social and financial equity for others, it is the lack of opportunities for women in Myanmar that Misuu highlights to make her case.

In an email to friends about the political changes happening in Myanmar post the 2015 elections, Misuu intoned the wisdom of the risk-averse elephant, speaking of welcoming change but of being always cautiously optimistic.

“This is just the beginning of another long journey which won’t be an easy one,” she wrote.

“Out people are known as compassionate, generous, forgiving and have unique survival skills. Now is [the] time to work not only harder, but smarter as well and prove to the world and set an example to inspire.”